No matter what kind of horror flick sends chills up your spine, iflix has the perfect pick for a Halloween scare-a-thon

If you love Slasher Flicks

Saw
Photographer Adam Stanheight (Leigh Whannell) and oncologist Lawrence Gordon (Cary Elwes) regain consciousness while chained to pipes at either end of a filthy bathroom. The two men realize they’ve been trapped by a sadistic killer nicknamed “Jigsaw” and must complete his perverse puzzle to live. Meanwhile, Dr. Gordon’s wife (Monica Potter) and young daughter (Mackenzie Vega) are forced to watch his torture via closed-circuit video

Scream
In the original film’s iconic opening scene, Drew Barrymore is seen answering the phone only to find a menacing voice on the other end. As she runs out the door to escape, she becomes the first victim of the serial killer “Ghostface” terrorizing the sleepy little town of Woodsboro. Suddenly nobody is safe, as the psychopath stalks victims, taunts them with trivia questions, then rips them to bloody shreds. It could be anybody and you could be the next victim. This was also the movie where Courtney Cox and David Arquette first met, and later fell in love. 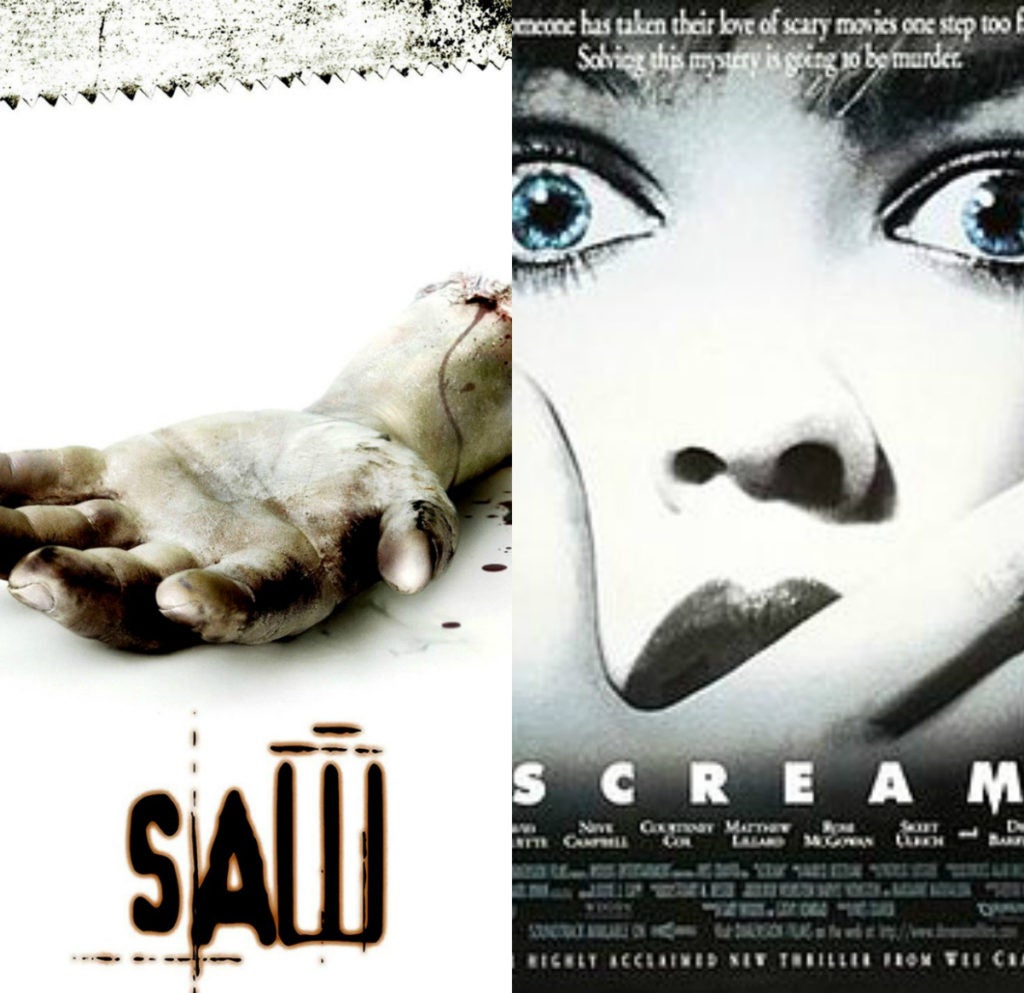 If you love Ghost Stories

The Amityville Horror
In this latest remake of the cult classic based on Jay Anson’s horror novel, Ryan Reynolds and Melissa George play George and Kathy Lutz who cannot believe their luck when they find a beautiful new house, in the small town of Amityville, N.Y., at an affordable price. After they move in with their kids, they find out the cheap price tag comes with the house’s sordid history – the former tenant murdered his family after supposedly being possessed by the devil. Believing the home is haunted, the couple find a priest (Philip Baker Hall) to help them rid the place of evil spirits.

The Conjuring
This is the movie that started it all. The Conjuring is based on one of the most disturbing cases of true-to-life paranormal investigators and demonologists Lorraine and Ed Warren from the ‘70s. Vera Farmiga and Patrick Wilson play the famed ghost hunters, who are summoned to the home of Carolyn (Lili Taylor) and Roger (Ron Livingston) Perron. The Perrons and their five daughters have recently moved into a secluded farmhouse, where a dark supernatural presence has made itself known. The manifestations are benign at first, the haunting events soon escalate, especially after the house’s macabre history is revealed.

Paranormal Activity
Soon after moving into a suburban tract home, Katie (Katie Featherston) and Micah (Micah Sloat) become increasingly disturbed by what appears to be a supernatural presence. Hoping to capture evidence of it on film, they set up video cameras in the house but are not prepared for the terrifying events that follow. This is the movie that kicked off the extremely successful horror movie franchise.

If you love Pinoy Horror Stories

Bloody Crayons
Nine graduating students head out to a classmate’s summer home on island to shoot their final project – a horror short film. When they get to the island, they get a cold welcome from Mang Pedring, the house’s caretaker. The group’s world turns upside down when one night, they decide to play Bloody Crayons, a take on “truth or dare,” but with a twist. When strange deaths started happening, the classmates have to come together to find the killer. The movie is based on the book by Wattpad writer Josh Argonza.

Feng Shui
Chito Roño directs this now-classic Pinoy horror film starring Kris Aquino in one of her finer roles. Picking up from the age old belief in Feng Shui, Kris plays Joy Ramirez, whose troubles begin when she receives a cursed Bagua mirror. Suddenly, people start getting killed around her – in mysterious circumstances that mimic their Chinese Zodiac signs. 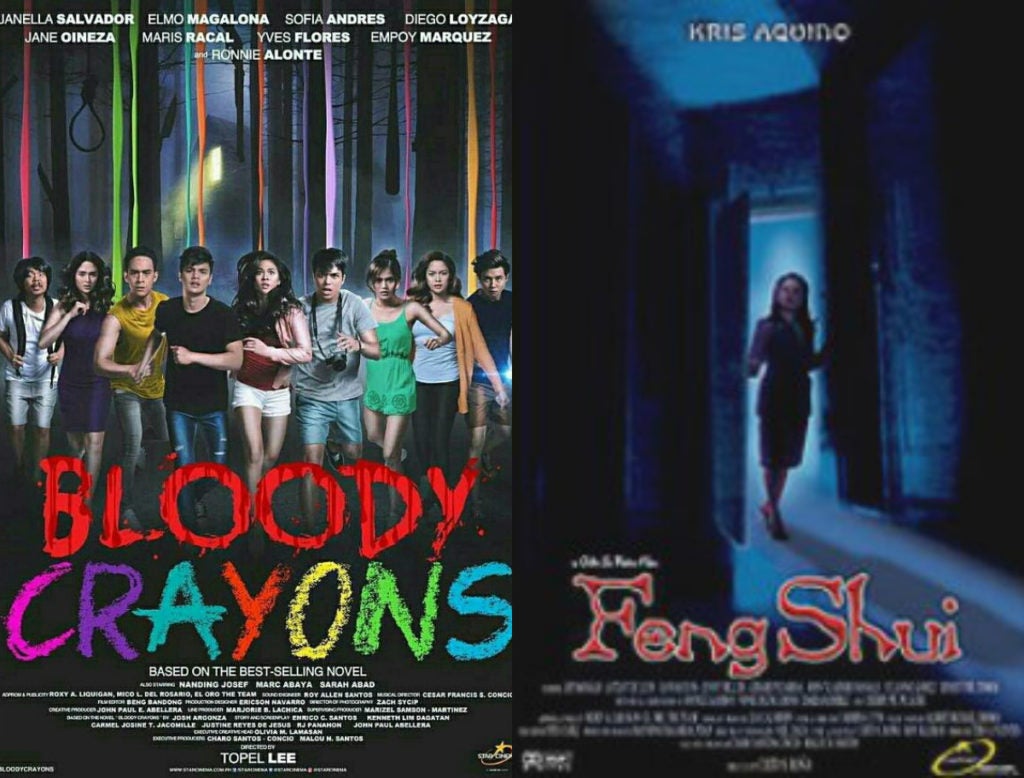 If you love Creepy Characters

Midnight, Texas
Based on Charlaine Harris’ book series by the same name, the series follows the lives of the strange inhabitants of Midnight, Texas. The small town in the middle of nowhere has become a haven for vampires, witches, psychics, hit men, and others with extraordinary backgrounds. Though they are viewed as outcasts everywhere else, the supernatural town members form a strong and unlikely family as they work together to use their powers to survive.
Binge-watch season 1 now, and catch new episodes from Season 2 every Saturday, only on iflix.

Annabelle
In this 2014 thriller from The Conjuring universe, John Form (Ward Horton) thinks he’s found the perfect gift for his expectant wife, Mia (Annabelle Wallis) – a vintage doll in a beautiful white dress. Then tragedy strikes. On the fateful night, cult worshippers invade their home and launch a violent attack against the couple. When the cultists try to summon an evil spirit, they turning the former object of beauty into a conduit for ultimate evil.

Scary Movie 2
The satirical look at iconic horror films continue in “Scary Movie 2” as it casts its eye on classics like “The Exorcist,” “Poltergeist,” “Hannibal,” “What Lies Beneath” and “The House on Haunted Hill.” With a cast led by Anna Faris, the franchise takes an even wider leap in its supernatural storytelling by taking on actions flicks including “Charlie’s Angels” and “Mission Impossible 2.”

D’ Anothers
In this 2005 comedy, Vhong Navarro plays Hesus Resurreccion, the scion of the Resurreccion family who now owns their supposedly haunted ancestral mansion. Many believe that the mansion is a portal to the afterlife, and every 25 years, it must be opened by a member of the family, dubbed as “The One”, to enable stranded ghosts to cross over to the afterlife. With the portal having been closed in the past 100 years, ghosts have overcrowded the now-abandoned mansion. Now Hesus, who is deathly afraid of ghosts, has no choice but to fulfill his mission as The One. 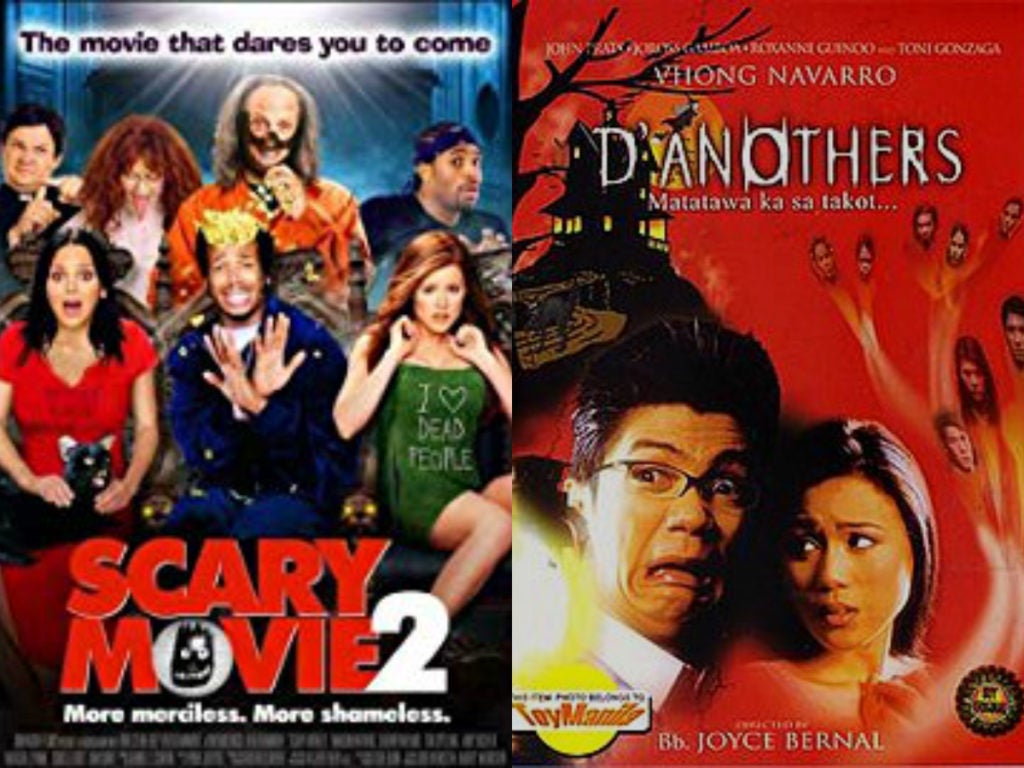 ABOUT IFLIX
iflix is the world’s leading entertainment service for emerging markets with the widest and most compelling selection of TV shows, movies, hyper local originals, premium live spots and up-to-the-minute news from around the world, to stream or download, on any internet connected device … wherever, whenever.
Created specifically for the more than one billion consumers in emerging markets, iflix now offers users two exceptional experiences through its iflixFREE and iflixVIP offerings.

Halloween movies
Horror film
iflix
pop culture news
We've got you Creepin’ it real on iflix
INQPOP! Stories we think you might also like: