Follow us:
On the heels of their six-time Academy AwardÆ-winning smash, "La La Land," OscarÆ-winning director Damien Chazelle and star RYAN GOSLING reteam for Universal Pictures' "First Man," the riveting story of NASA's mission to land a man on the moon, focusing on Neil Armstrong and the years 1961-1969.

Two-time Oscar-nominee Ryan Gosling stars as real-life astronaut Neil Armstrong in Universal Pictures’ First Man, the riveting story behind the first manned mission to the moon, focusing on Neil Armstrong and the decade leading to the historic Apollo 11 flight.

Time and again, Gosling has proven his commitment to his art—as seen in his preparation for his Oscar®-nominated role in La La Land, when he learned to play the piano in just three months. Likewise, during his preparation for his role in The Notebook, Gosling spent two months soaking up the culture of Charleston, South Carolina, and, just like his character, actually learned to build furniture.

On the heels of their six-time Academy AwardÆ-winning smash, “La La Land,” OscarÆ-winning director Damien Chazelle and star RYAN GOSLING reteam for Universal Pictures’ “First Man,” the riveting story of NASA’s mission to land a man on the moon, focusing on Neil Armstrong and the years 1961-1969.

In First Man, Gosling proves his dedication in time spent studying to portray the global icon. For the production team, director and star are inextricably linked in their shared passion for perfection. “Ryan has a commitment to doing excellent work,” sums producer Marty Bowen. “He is keenly aware of the legacy he’s leaving behind and often, likeminded people find one another in material that they can connect with. It makes sense that Ryan and director Damien Chazelle want to work together. When you watch La La Land, the character that Ryan plays is someone who’s obsessive about his craft…because Ryan’s obsessive about his craft.” 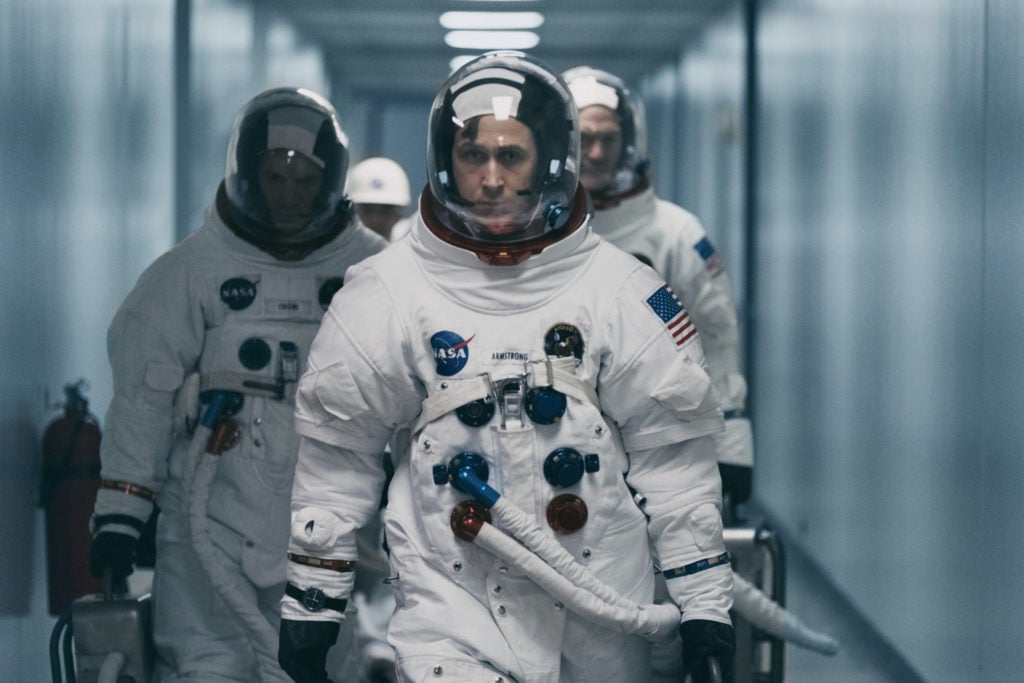 (L to R, Foreground): Lukas Haas, Ryan Gosling and Corey Stoll in FIRST MAN. On the heels of their six-time Academy Award®-winning smash, “La La Land,” Oscar®-winning director Damien Chazelle and star RYAN GOSLING reteam for Universal Pictures’ “First Man,” the riveting story of NASA’s mission to land a man on the moon, focusing on Neil Armstrong and the years 1961-1969.

Gosling brings a special something to his roles, commends Bowen. “It’s his humanity. It’s his understanding of sentiment…and not sentimentality. So often people want to overwhelm you with their emotion. It’s the truly great craftsmen who know how to dispense it in a way that keeps you leaning in.” 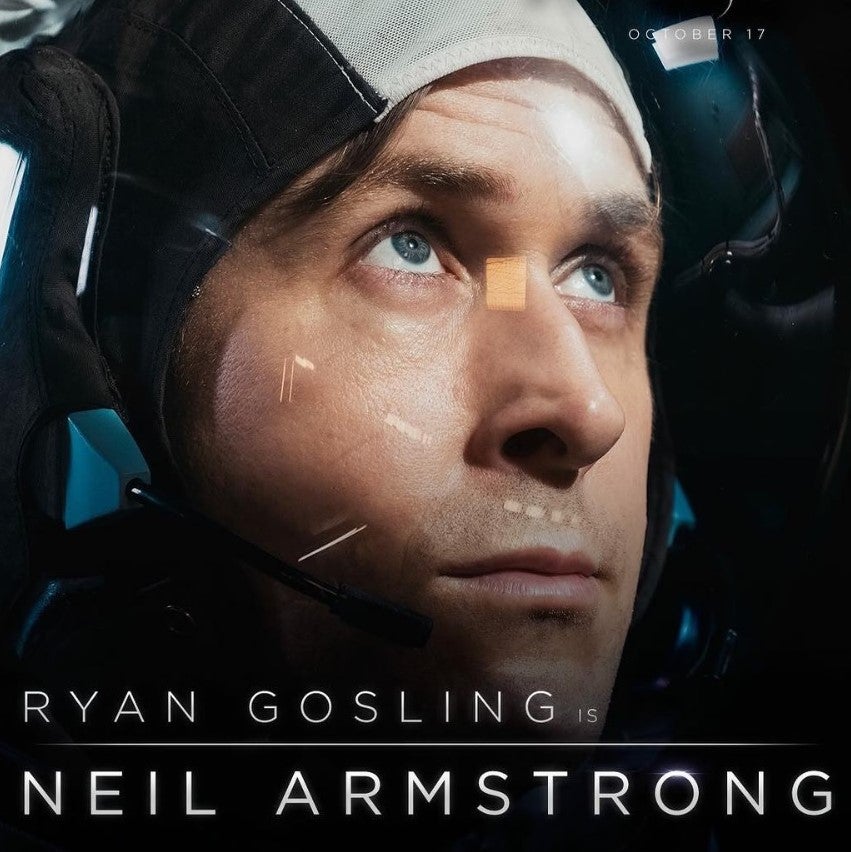 Gosling admits that becoming Neil Armstrong would have been impossible without the help of numerous collaborators. “I was very privileged to meet with Janet Armstrong before she passed away. I was also very fortunate to talk with Neil’s two sons, Rick and Mark, and spend time with Neil’s sister, June, at their farm in Wapakoneta, Ohio, where Neil was born. The Armstrong Air & Space Museum, and both NASA’s Cape Canaveral and Houston facilities, opened their doors to me. There were also experts on set daily to advise on the specifics of every mission we were trying to replicate. I also had almost constant access to author James Hansen and his book First Man; a work of more than 700 pages of meticulous research. I’ve never had so much help researching a role or been involved with so many people who were so enthusiastic and happy to provide it.” 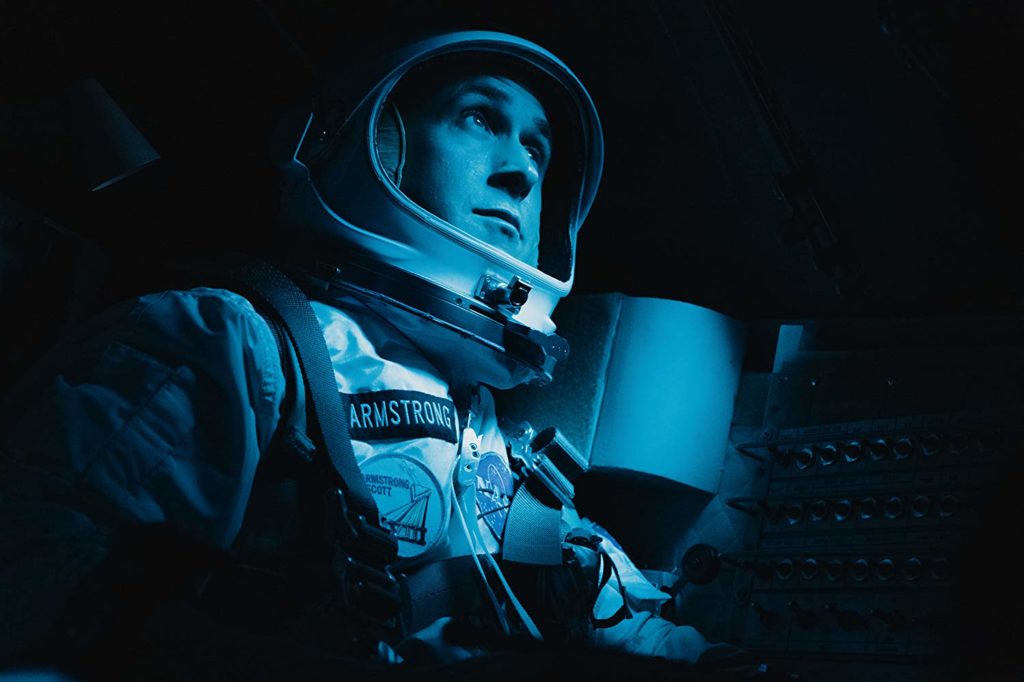 Gosling’s fascination for Armstrong and the men who were his cohorts permeated the production. “My first instinct in preparing for this role was to learn how to fly. Neil was flying before he could drive; it seemed an integral part of who he was, so I thought I should start there. At a certain point in my training, I was asked to force the aircraft into a self-imposed ‘stall,’ and I had a moment of clarity. This was a terrible idea. I understood in that moment why Neil was destined to be one of the world’s greatest pilots and why I was not. Like many other astronauts, Neil began as a test pilot. It takes a certain kind of person to knowingly get into an aircraft that has never been flown and take it to its breaking point, for the sole purpose of finding its flaws so that we might move our understanding of aeronautics forward.”

One of Gosling’s biggest fans on set was the actress who plays his on-screen wife. “Ryan is warmth personified,” sums Claire Foy, who portrays Janet Armstrong. “He doesn’t have to work very hard at that, I don’t think. He’s incredibly likable as a person, and that’s the thing with Neil. I don’t think he was antisocial or rude; he wasn’t conventional. He didn’t do what everybody does, which is try and make everyone else feel great about themselves…and if there’s an awkward silence, try and fill it. Innately, Ryan is kind-hearted and generous and warm and genuine…that’s just naturally what he brings to the table.”

First Man is distributed by United International Pictures through Columbia Pictures. Follow us on Facebook at https://www.facebook.com/uipmoviesph/