According to American aphorist Mason Cooley, “Art begins in imitation and ends in innovation”.

And in China, this went a little too far, especially when it comes to the country’s newest trend: “duplitecture”. Chinese architects believe that the art of mimicry paves way to further creativity and potential innovation.

Many Chinese people love their replica of the European town as residents experienced the genuine European feel brought by the so-called “Paris of the East,” in Tianducheng (meaning Sky City) near Hangzhou in Zhejiang province. The formerly called ghost town had grown its population into thousands — thanks to the development of this French-styled city in 2007.

Living up to its name “Little Paris,” this tourist attraction also showcases its own Arc de Triomphe, Champs Elysées main square, French neoclassical-style buildings, Luxembourg Gardens Fountain and its main feature: the Eiffel Tower which is said to be the second largest replica next to the one in Las Vegas Hotel.

No wonder why many foreign tourists — especially newlyweds and young couples — visit the Sky City to take their ideal wedding photographs.

According to Mail Online, the duplicated Paris has 164-acre area worth £420 million and designed with French neoclassical architecture that can accommodate up to 10,000 people. Tianducheng’s Eiffel Tower which lightens up at night is measured 354 ft. (108 meters).

Even French photographer François Prost was impressed by the striking similarities of the Tianducheng to Paris. In his portfolio, Prost’s image series named “Paris Syndrome” aims to spot the differences between Paris-France and Paris-Tianducheng. 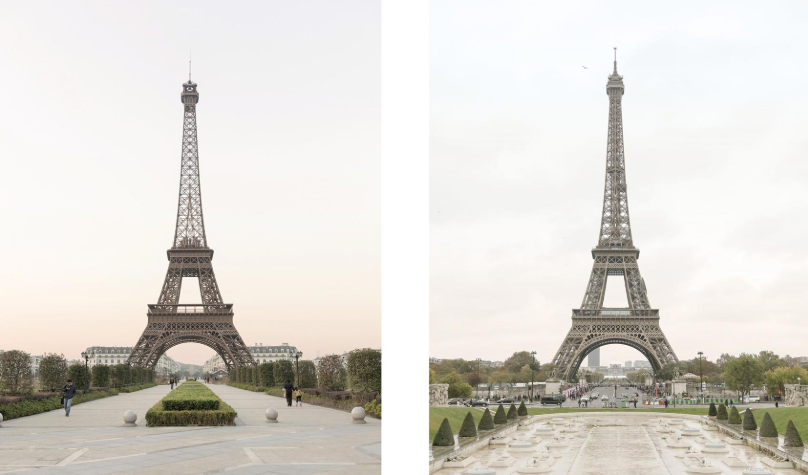 The picture on the left is in China and the one on the right is in Paris. Photo credit: François Prost

In an interview with South China Morning Post, Prost said “I just found the whole idea of duplication so compelling and fascinating. Tianducheng is immense”. In spite of the absence of nightlife, French bars and restaurants in Paris, the night activities in Tianducheng include going shopping and doing tai chi (Chinese martial art/exercise) along the streets. He further described Tianducheng as “quite animated and lived in.”

Aside from the “fake” Paris, Changde in Hunan Province built a new city inspired by Germany’s Hanover City and there are different towns like Dutch, English, German, and Italian that can be seen in Shanghai.

Surprisingly, Chinese people believe that copying or duplication is not something illegal or a crime. But in their copy-friendly culture, a good replicator is a well-appreciated talent and the art of mimicry is encouraged.

Duplitecture is not just simply copying theme parks just like what we see in Las Vegas. Rather, cities are designed as communities where Chinese families can also live their lives. The resemblance of each building may vary, as it may appear bigger or smaller using various materials and different colors compared to the original. In some cases, the construction of these copycat cities is modified to follow the Feng Shui doctrines.

Even though tourists and locals enjoy these “copycat structures,” Chinese people still value its own heritage and construction designs.

And just like what Bianca Bosker, author of Original Copies: Architectural Mimicry in Contemporary China, said: “While it once considered itself to be the center of the world, now China is making itself into the center that actually contains the world.”

Travel vlogging for PH tourism seminar to be held at UST