WATCH: Farmers help out a rodent with a plant growing out of its back

Most farmers would agree that it is normal to see rodents lurking around their crops. Oftentimes, they find these pests gnawing at the fruits of their labor.

In this case, an Indian farmer discovers a rodent with soya bean plant growing out of its back. 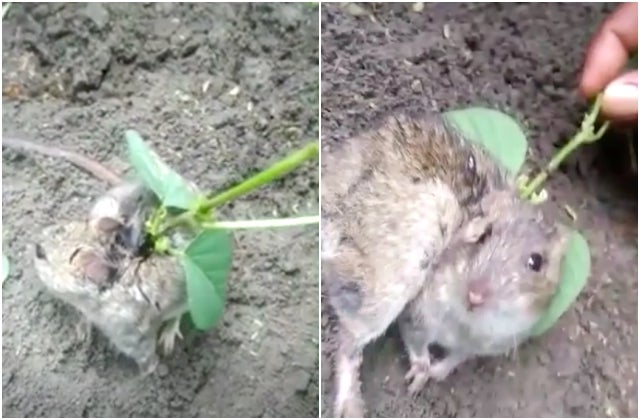 In the video below, farmer Datar Singh and his friends can be seen inspecting the rat’s exterior to see if a seedling did, indeed, grow from its back. To their surprise, the plant is firmly stemmed on the rodent’s posterior.

A number of people speculated that the soya seed must have germinated and grown in the animal’s open wound. Though it looked visibly painful for the rodent, Biology professor A Siddiqui tells Unilad that the animal suffered  “no brain damage.”

Since the video was uploaded, Singh and his peers have reportedly removed the plant from the animal’s back and the creature’s since been recovering from its injuries.

A rat cafe opened in San Francisco and diners are loving it!

Warning: If you love animals, this animated short film will break your heart

farms
india
Rat with plant on its back
Rats
Rodents
wtf
INQPOP! Stories we think you might also like: