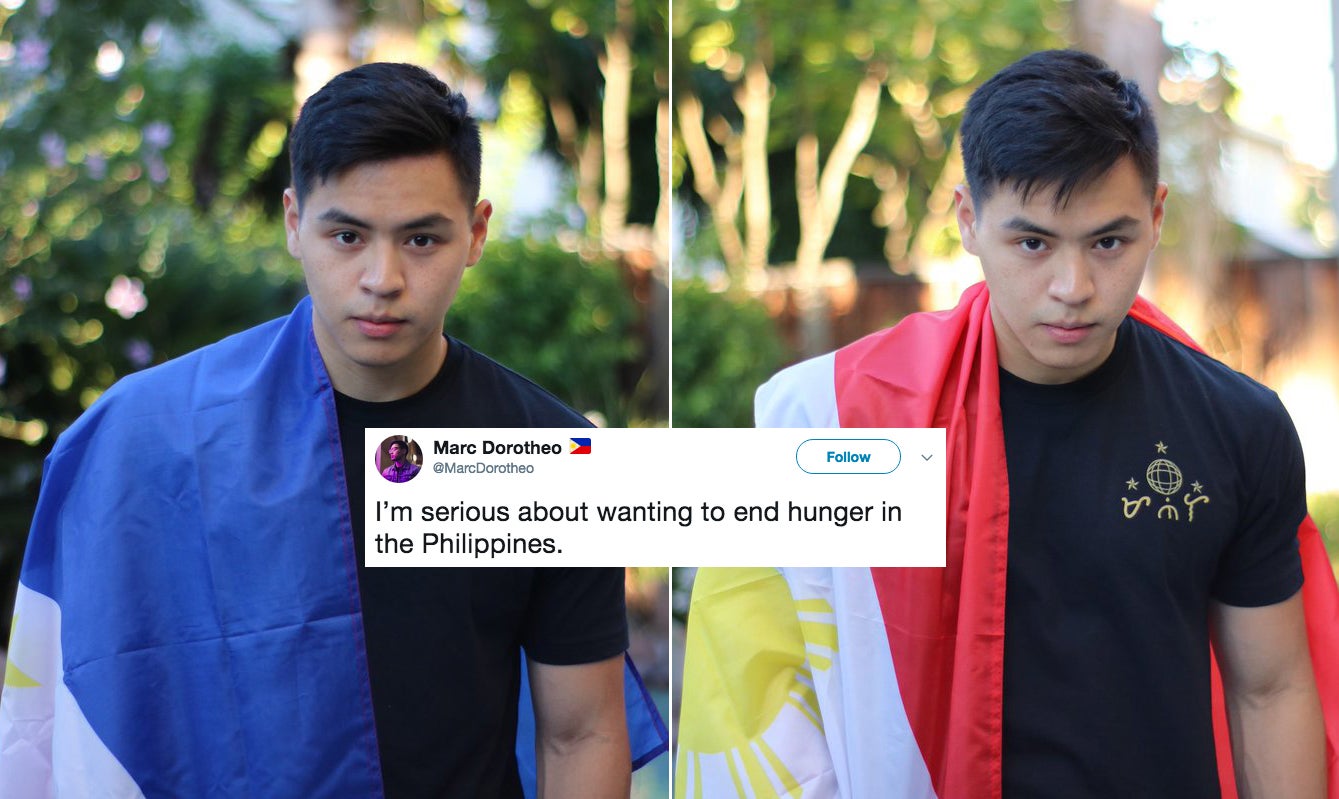 Unlike other countries where you can see the national flag being used on almost every merchandise and apparel you could possibly think of and hear people call it “patriotic,” the Philippines has a law that protects it from being misused and disrespected.

There have been instances where the use of Philippine flag sparked debate and uproar in the country, and one of the notable moments was when Madonna performed while the national symbol was draped around herself during her concert in Manila last 2016. The “disrespectful” act even almost got her banned from the country.

Recently, a man who claims to be “serious about wanting to end hunger in the Philippines” found himself in hot seat for sharing photos of him with the flag draped on his shoulder.

I’m serious about wanting to end hunger in the Philippines. pic.twitter.com/EFq0TgHRoG

On Twitter, Marc Dorotheo shared his desire to end hunger in the country by providing meals for those in need in exchange for every purchase on Four Manila, an online apparel store he founded. While his intentions to give back to the community and help feed the poor may seem genuine, a lot people called him out for using the national flag on his photos.

go dearie. the flag is not an accessory that you can just easily wear.

his intentions are good! but he really shouldn't have used the flag like that

Lmao he isn’t paying attention to any reply that states something about the flag. What a shit.

Dont forget to remind him everyday about the law. MAKE HIM READ THIS OVER AND OVER UNTIL HE WILL UNDERSTAND EVERY SINGLE WORD STATED.https://t.co/tiw34CFt8v

According to the Section 34 (e) of R.A. 8491 or the “Flag and Heraldic Code of the Philippines,” it is prohibited “to wear the flag in whole or in part as a costume or uniform”. You can see the list of all prohibited acts below: 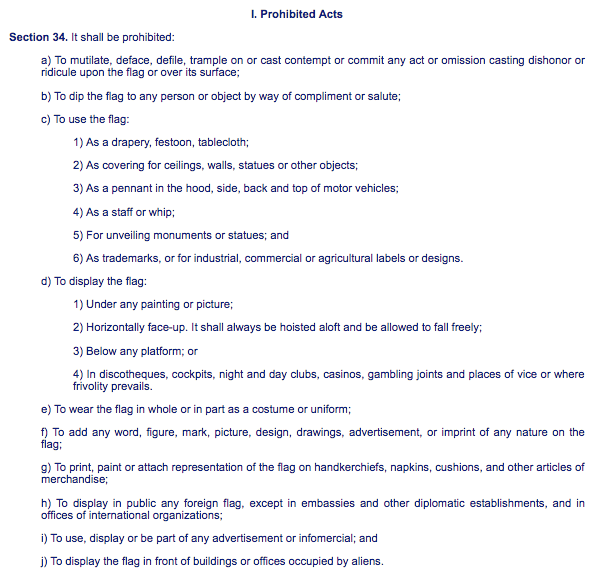 Violators of any of the said acts shall be subjected to penalties as stated on the Section 50 of the law:

“Any person or juridical entity which violates any of the provisions of this Act shall, upon conviction, be punished by a fine of not less than Five thousand pesos (P5,000) nor more than Twenty thousand pesos (P20,000), or by imprisonment for not more than one (1) year, or both such fine and imprisonment, at the discretion of the court: Provided, That for any second and additional offenses, both fine and imprisonment shall always be imposed: Provided, further, That in case the violation is committed by a juridical person, its President or Chief Executive Officer thereof shall be liable.”

Despite many who pointed out that using the flag as accessory is against the law, Dorotheo defended that he did not disrespect the flag and he’s just “proud of [his] heritage and of being Filipino.”

“I’m not chasing fame, money, whatever. I have fallen in love with the flag (insert your jokes now), and everything it represents that when it’s displayed, I feel even more courageous,” said Dorotheo when asked on social network platform, Curiouscat.

Some people were also questioning the legitimacy and the sustainability of his project and how it can really help “end hunger” in the country without solid plans and partnership with Philippine institutions that actually work on solving hunger in the country.

I'm against one-time feeding projects like this, or any outreach that isn't sustainable. You show-up in a community w/ goodies only to feed them for one meal (a snack), then you're gone from their lives. Photo-op done. They're hungry again. Empower them. #GoForSustainability

I understand that you said a shirt purchase translates to meals to be donated, but can you make it so that it doesn't end there? I'd rather you pool portions of the earnings and form an endowment fund to feed a small community or help them w/ essentials.

This is an excerpt from yesterday’s FAQ segment. Sustainability is definitely part of the brand. I’ve discussed that I don’t want it to just be “meal distributions.” pic.twitter.com/STdP2cQEPu

Others said that they see Dorotheo’s advocacy as a “band-aid humanitarian solution that comes off to me as a gimmick to increase shirt sales” and suggested means on how he can really help giving solutions to hunger in the country.

If you really are *~serious~* about wanting to end hunger in PH, donating food is not the best way.

My suggestion is for you to build an NGO and give opportunities to the poor. Yours is a band-aid humanitarian solution that comes off to me as a gimmick to increase shirt sales. pic.twitter.com/LcV5LUlVAd

I'm sure this is a brief version. A suggestion is to incorporate beneficiaries as partners, or partner beneficiaries. Partnering w/ LGUs and other orgs who have worked in target areas will minimize redundancy of projects (if any) already in place.

It’s our public statement. And thank you for your message.

I’ll definitely take that into account as being a very minuscule-sized operation, we would like to be as efficient as possible and not waste our limited funding.

But to add fuel to the fire, it seems that Dorotheo has carried his fondness of the flag not just on his shoulders but also on the logo of Four Manila—a violation to the Section 34 (c, 6) which prohibits the use of the flag “as trademarks, or for industrial, commercial or agricultural labels or designs”.

With this, he said that he’s making sure not to sure the PH flag moving forward.

Also the reason for this open forum is to help make better informed decisions for #FourManila.

Before anyone talks about the “American Flag/USA” logo, I’m making sure I don’t use the PH flag moving forward.

Meanwhile, some Pinoys saw Dorotheo’s tweet as an opportunity to make another meme on Twitter and end other relevant issues in the country.

I'm serious about wanting to end [ ] the Philippines. pic.twitter.com/8YBLlVjC3i

I'm serious about wanting to end hunger in the Twitter alter community.

i’m serious about wanting to end homophobia and gender inequality in the philippines pls buy my merch pic.twitter.com/i85pGk57wI

she's serious about wanting to end the world hunger pic.twitter.com/ecQ6WxFqv6

Nancy is serious about wanting to end hunger in the Philippines. pic.twitter.com/YbuYqEelQA

I’m serious about wanting to end ghosting in the Philippines. pic.twitter.com/7S24up3OM5

I’m serious about wanting to end my hunger in the Philippines.

Dorotheo said that he already reached out to National Commission for Culture and the Arts (NCCA) via email and will take actions once a conclusion has been made.

And me and friend have emailed @NCCAOfficial regarding the photo. Awaiting their response.

Proper actions will be performed once a conclusion has been made. 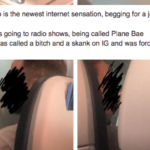 The creepy side of the #PlaneBae story 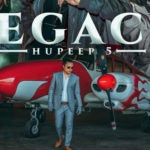