After the “New Generation Currency” (NGC) Coin Series was introduced to the public, it was met with scrutiny and has sparked debates among netizens. According to Banko Sentral ng Pilipinas (BSP), the decision to release a new series of coins was mainly to stop foreign entities from illegally exporting coins to extract its nickel content and use it for other purposes.

The new set of coins ranging from 25-centavo to 10-peso features a national hero on one side and a plant endemic to the Philippines on the other—and all of the coins have same metallic silver look to “addresses concerns on discoloration predominantly observed for copper-based metals.” Laser-engraving technology was used in the micro-printed details of the 10-peso and 5-peso coins to make it difficult to counterfeit.

People shared their two cents online regarding this change, saying that the new coins are confusing, impractical, and are not “friendly” for senior citizens and people who have poor eyesight.

But as people voice out their concerns regarding the confusing color and sizes of the new coins, some people still couldn’t resist making a “hugot” out of it. 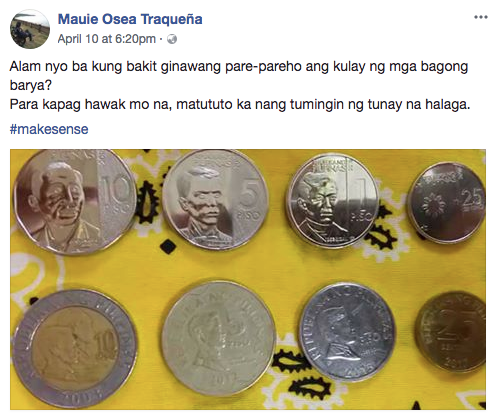 Some had a good laugh because of the “barya hugot,” but many found it insensitive to those who are greatly affected by this change like jeepney drivers, sari-sari store owners, and the elderly—those who will have a hard time distinguishing the coins from one another and whose businesses will suffer.

A recent viral post on Facebook shows the reality of how people are welcoming the new series of coins with difficulty and how it affects their livelihood everyday. Jessica Erice Zafra shared her experience in a jeepney where a “lolo driver” mistakenly gave her 38 pesos as change when she only needed 8 pesos after paying 20 pesos.

On my way home from Ortigas this evening, I rode this crowded jeepney and I was fortunate enough to be seated in front,…

According to her post, the driver got confused with the coins and wasn’t even aware that there are new 10 and 1-peso coins. He told her that he still has to work so he can support his grandson who is in college.

Zafra told InqPOP! that while she is not against the change of the new coins and understands the rationale behind it, like “cost-cutting measures for the BSP and for security measures,” she doesn’t like how the change was implemented.

“For me, the BSP should have given more consideration to the design, and how it would affect the masses (especially the elderly and visually-impaired). Since the Philippines is a 3rd-world country, and a big percentage of the population live below poverty line, every peso counts for them. So losing a peso or several pesos just because of this is really difficult for their part,” Zafra said.

She believes that the Filipinos will be able to adapt to these changes but she hopes that people will be more discerning when making transactions using these coins.

“I hope they will also be more considerate to the elderly and visually-impaired whenever they make mistakes regarding this. Lastly, I hope more people will understand the impact that this change has on the lives of everyone, especially those who are financially-challenged.”

We live in a generation where almost everything is “hugot-worthy” for some. But making a hugot out a sensitive issue that greatly affects those whose livelihood suffer by it is simply not for the everyone’s entertainment. After all, the likes and shares you get from this hugot post won’t be able to feed these families who think every peso counts.

Bridesmaid unintentionally ‘upstages&’ bride by being so ‘extra’ in the photos