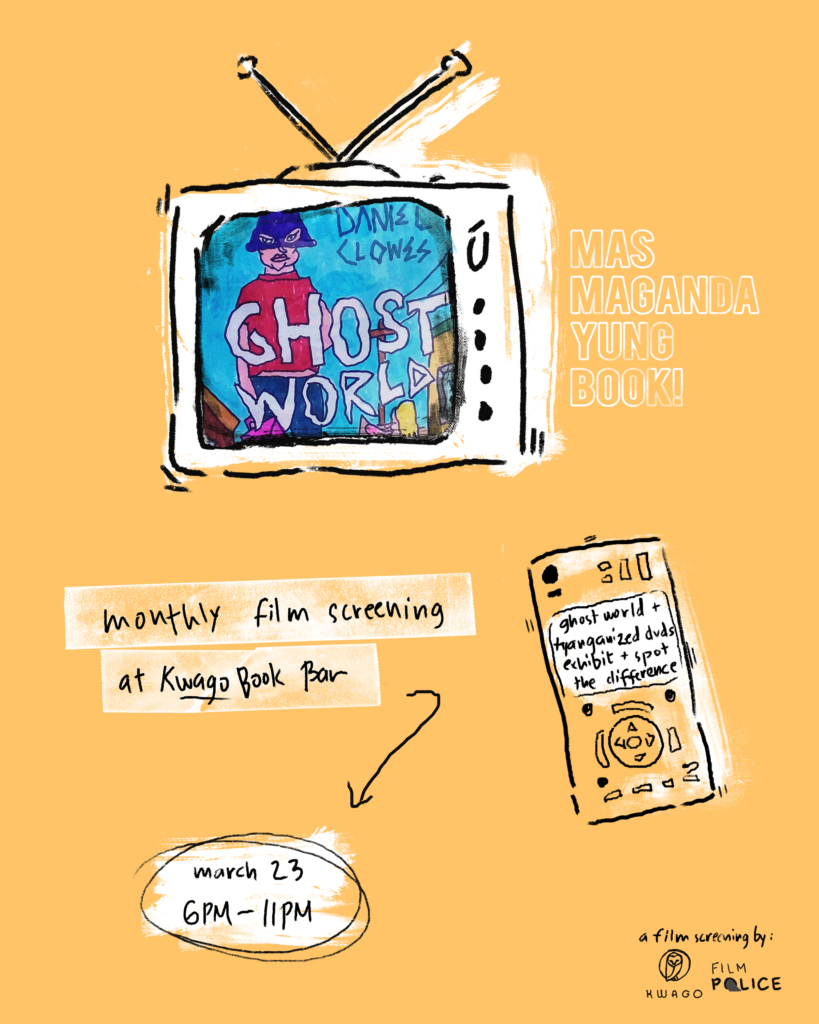 Kwago in partnership with Film Police Reviews (FPR) is set to launch Mas maganda yung book! on March 23, 6PM. A monthly film screening of movies based on books, the gathering aims to let people appreciate the written word in a different medium, as well as encourage critical discussions about film adaptations.

“We’re not really saying that the book is better than the films we’re going to screen. The event’s name is more of a tease—a joke. It’s a playful prompt for people to think on their own and break down things they consume,” Kwago founder Czyka Tumaliuan clarified.

“One of Kwago’s mission is to foster a culture where people are more conscious about the things they expose their minds and selves too,” Tumaliuan continued.

The movie night opens with Tyang Karyel’s exhibit Tyanganized DVDs where the contemporary Filipina artist creates “trash drawings” of books turned into movies and places them inside cheap Blu-ray Disc plastics, making them seem like pirated commodities from China.

Tumaliuan expressed her deep gratitude that Karyel agreed on collaborating with her. Kwago’s chief librarian, also an art writer, first saw Karyel at Viny on Vinyl early last year selling her (in)famous DIY DVDs. She was instantly charmed by the artist.

“It reminded me of the time when I still buy pirated DVDs from Makati Cinema Square. Wala pang Pirate Bay and Netflix non eh! I thought it was really cool, as it captured the subculture that defined my college life,” Tumaliuan confessed.

“With the rise of local artists doing lowbrow art, Tyang stood out. It had an honest pulse and didn’t looked like just another brut. I bought Eraserhead by Lynch in a heartbeat.”

Kickstarting the series is Ghost World by Terry Zwigoff, which was nominated at the Academy Awards for Best Adapted Screenplay in 2002.

“FPR would be there to add to the discussion rather than lead it. Criticism is about analysis, and when it comes to analysis, there can be multiple interpretations. So a critic may be there to impart significant insights, but one must not be closed off to ideas coming from the crowd,” Film Police Reviews Co-founder Tristan Zinampan emphasized.

Free shots for people who could spot the difference between the book and the movie!