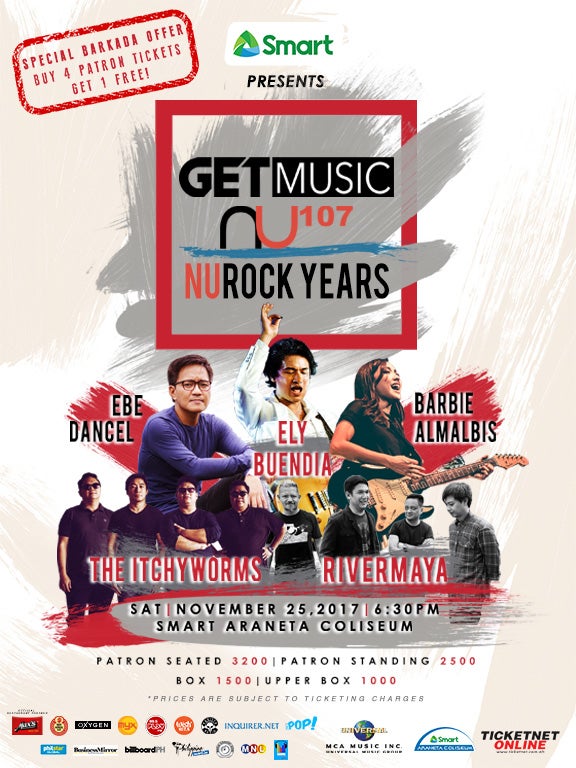 Though the invention of the term “Pinoy Rock” was first coined decades ago in the 60s, it was the 90s and the early years of the millennium when we perfected it: groups like the Eraserheads reshaped the sound and the ethic in creating simple, pop-rock anthems and turning them into the soundtrack of our adolescent years, and groups like Rivermaya and Hungry Young Poets added a world-class sheen to their songwriting and studio work, while the strength of hit-making machines like Sugarfree and the Itchyworms continued that tradition well into the millennium.

Simply put, these were they years when local rock music reached the epoch of its creativity, and they all had one institution to rally behind: the iconic radio station NU107FM, simply known as “the home of nu rock.”

And local music fans and music enthusiasts, again, need not to look any further, as this November 25th at the Smart Araneta Coliseum, as Smart presents GETMUSIC NURock Years, arguably the biggest assembly of local talent in the Pinoy rock music game. Indeed, audiences can be sure that no other show this year can deliver the magnitude – and the priceless memories – that the GETMUSIC NURock Years promises… but for safe measure, here are 10 reasons to consider why you SHOULD be there:

1. The lineup consists of OPM Legends who are still active in the industry

Though this event is without a doubt a celebration of the songs that were part of the soundtracks to our teenage years, the lineup: which consists of surefire crowd-drawers like ELY BUENDIA, BARBIE ALMALBIS, EBE DANCEL, ITCHYWORMS and RIVERMAYA, is one that does NOT feature nostalgia acts, but one that highlights the musical contributions of artists who are still at-it: changing the shape and sound of local rock music as we know it.

2. The hits will be coming all night long

You can bet that we’ve got nothing BUT the hits lined-up for you and your friends… that’s right – no fillers, all winners! You know how you sometimes catch a concert and are just waiting for the artist to play that one single that you like most? Well this time, it’ll be ALL the hits you want to hear. Not to mention that a lot of the songs you will hear at this show aren’t always being played these days…

3. All artists will be doing full sets

Don’t you sometimes hate it when you go to catch small gigs, you dress-up, buy a ticket and brave the rain and traffic for… five songs? Well that won’t be a problem, since the artists taking part of GETMUSIC NURock Years will be doing full sets of their greatest material, so you might want to go to the comfort room before each set starts, and strategically plan-ahead when it comes to buying your food and drinks so you don’t miss anything.

4. It’s the perfect show to watch if you’re reuniting with old friends

The holidays are just around the corner, and we Filipinos like to get-together and reconnect with old buddies and special people who have been an important part of our say, high school or college years… and who we might have lost-touch with due to our busy schedules, and general “adult-ing.” So call-up that long-lost buddy, or that ex-flame or that college crush or even that tough guy or gal you were afraid of back in the day and catch-up: if you purchase four (4) Patron Standing or Patron Seated section tickets from the TicketNet Office or any TicketNet participating outlet and/or through the online site ticketnet.com.ph, you will get one (1) free ticket for the same section. You’ve got to hurry though before the tickets fly-fast, because the promo period starts from October 16 to November 25, 2017.

5. This is the closest thing to having NU107 back on air

We know a lot of music fans miss the seminal radio station known to aficionados as “the home of NU Rock,” and there are so many stories – from the larger-than-life personalities of the DJs, to numerous events like the NU107 Rock Awards that every serious Pinoy Rock fan – that are expected to be told among like-minded enthusiasts. This is the best opportunity to see not-so-old faces and characters who have been a part of the legacy that NU107 has characteristically left. There are current radio stations who are doing a great job in carrying-on with the tradition, but of course – there will only be one NU107.

6. It’s also the closest thing we have to a “reunion” of the greats

Let’s not beat around the bush and acknowledge the obvious: the rabid clamor and persistent chatter in the grapevine of reuniting legendary acts like the Eraserheads, Rivermaya, Sugarfree and the like, have always been a hot topic in serious music fan circles locally. And we get it… we’d love for that to happen too! But until the stars align and the universe conspires and throws us a bone, this is just as great in the meantime: you’ll be hearing the same, great musical anthems NOT by a cover band, but from the songwriters and/or original, key-band-members themselves.

Work and traffic are two facts of like here in the Philippines. And depending on your situation, both can be main deciding factors on whether or not you decide to go to certain shows and events. Fortunately, Smart Music Live Presents: GETMUSIC NURock Years is happening, first of all, on a Saturday – when traffic isn’t TOO bad, and second, at the Smart Araneta Coliseum located in the middle of the metro, at The Araneta Center. You can conveniently drive yourself there, train-it, cab-it, uber-it, UV Express-it or even trike-it! Definitely one of the main perks of having your event smack in the middle of the metropolis! Heck, you could be living in some far-away province, and you’d still get to the venue with one ride!

See what we did there? Well, we’re only sort-of kidding, as Smart subscribers will be glad to know that they made the right choice, because all Smart Prepaid and Postpaid, and Smart Bro Prepaid and Postpaid subscribers will be eligible to a whopping 20% discount on all Patron Section tickets. That’s right – just bring proof of your subscription – be it the Smart Signal Identifier, a SIM card or whatever – and you can get 20% off the sale price of up to six (6) tickets per subscriber. You’ve got plenty of time to subscribe!

9. Young music fans will enjoy, too

Did we mention that none other than Paolo Valenciano will be directing this spectacle? That’s right – this may attract loyal, longtime fans of local Pinoy rock, but you can also think of this as a NU Rock 101 of sorts: a fun, yet highly educational experience that can show the next generation of would-be music enthusiasts on how it was – and is – properly done! Plus, it’s exciting to see how Valenciano’s youthful vibe and spirit will translate into the show which features timeless, age-less music legends.

10. Everyone – and we mean everyone– is expected to be there

Let’s face it – when it comes to music, it is one of the greatest equalizers in the entire world. Young folks, teenagers, old folks, doctors, dentists, lawyers, industry pundits, record label executives, celebrities, mother, fathers, sisters, brothers, you name it – music makes the world go round, it brings people together and it makes for good memories. And there’s something uniquely special – and utterly emotional – when it comes to our local brand of music. So don’t be the guy or gal who’s staying home that night or somewhere else. Make sure you’re at GETMUSIC NURock Years to celebrate and party alongside all of us who love the music and the legacy of the NURock Years! We promise it’ll be epic!

For more information, you can check out the official event page, and you can get your tickets here.