With less than a month before the May 9, 2022 national elections, people online have become more active (some more rabid even) in defending their candidates of choice. Artists, celebrities, social media influencers, organizations, schools, have spoken, performed, joined campaigns, and rallied behind their preferred politicians and campaign colors.

Among these outspoken personalities is one name that has been thrown around the online space a lot lately, especially on Facebook, TikTok, and Reddit: Rowena “Bing” Guanzon. Some people abhor her, but a lot of people also love her. She has always been known as a courageous lawyer and a fearless Comelec Commissioner but after her retirement, she has hogged the internet limelight because of her snappy clap-backs to her critics, thus now she takes on a new title as “The Queen of Online Bardagulan”—something which she has proudly acknowledged and now wears like a badge of honor.

Who is Bing Guanzon?

Maria Rowena Amelia Villena Guanzon or simply “Bing”, is a Filipino lawyer, public servant, politician, a Commission on Audit commissioner (who promised to give priority to gender and development upon her appointment in March 2018), and a retired COMELEC commissioner, where she has served from 2015 until her recent retirement on January 31, 2022.

An Ilongga born and raised in Cadiz City, Negros Occidental, she is a member of the prominent Guanzon clan known for their haciendas (sugarcane plantations). Guanzon was appointed mayor of the warlord city, Cadiz in 1986 (under the Provisional Government of the Philippines) after several candidates backed out, fearing violence from the nefarious Escalante Massacre that happened a year before. She was only 28 at the time, and was known as the youngest Mayor in the Philippines. She also worked as the Chief of Staff of the late Senator Miriam Defensor Santiago, who she looks up to as her role model and icon.

Currently, the outstanding litigation lawyer, law professor, writer, and retired Comelec Commissioner—now out of government office and enjoying the social media space—has proudly acknowledged the new monikers given to her by people on the internet: such as “Mama Bing” (to her virtual children), “Burner of Trolls”, and ultimately as shown on her official FB page, “Queen of Bardagulan”. 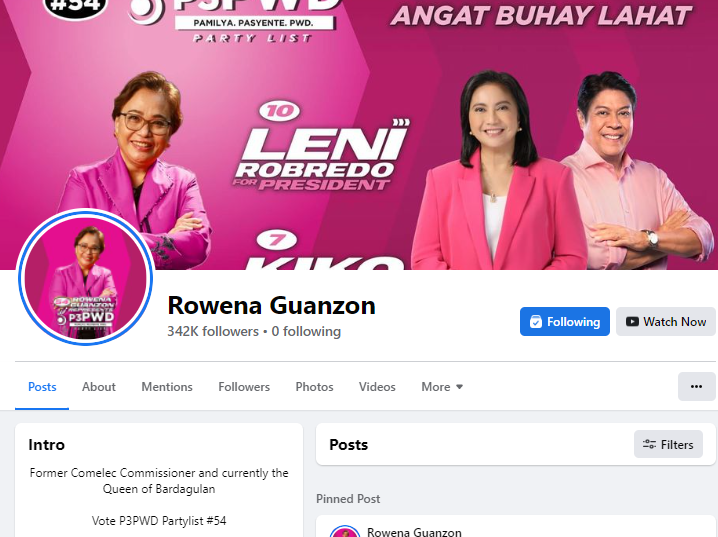 Recently, Guanzon’s posts, witty comments, clever clap backs, and snappy rebuttals against social media trolls have been trending as these are so hilarious that people couldn’t help but share, making them go viral each time. Why not, there are two reasons: one, she has no chill for trolls and two, she now has all the time on her hands.

“Bardagulan” (fighting) comes from the word “bardagol” which is a character—usually a big person—probably of the perfect size to bully people around. It’s a slang used when a character engages in either an intense debate or fist fight. In social media, “online bardagulan” is a slang that loosely means airing your thoughts in a mocking or sarcastic tone. This is exactly what Guanzon is currently up to in the online space as she engages her critics with comebacks that are hilarious, but with some hint of sarcasm.

Some of the more viral clap-backs were when she posted a photo of herself in an airport and a certain Mildred commented that, if ever, she would run for the Senate in the future, she will not vote for Guanzon; to which she replied: “Di ka kawalan, Mildred” (It’s not my loss, Mildred). And again, this Mildred got the double whammy when Guanzon posted a photo of herself by a seashore. Mildred commented: “Ma’am, dala ng barko yung magnanakaw, nawalan ka na ng hati. Wag mong seryosohin ang nakaw…” (Ma’am, the ship already got the thief, you have lost your share. Don’t worry about the thief). Guanzon, remembering the same person, gave Mildred the double burn: “Ano na naman yan, Mildred?” (What’s that about again, Mildred?). 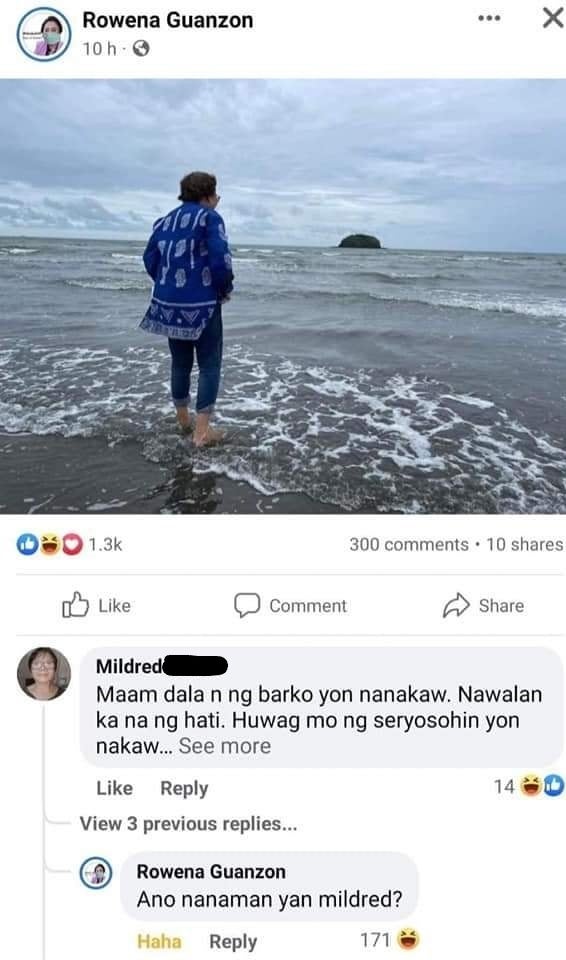 That same seashore photo earned a comment from a certain Lourdes who said: Wag kang magpakamatay (Don’t take your own life), God will take you himself. You have to pay first for all your sin, whatever you did He is watching you for sure.” “Baka mauna ka pa (You might go first),” was Guanzon’s simple reply.

Other hysterical moments when Guanzon had the netizens cracking up with her hilarious and witty retorts are these: 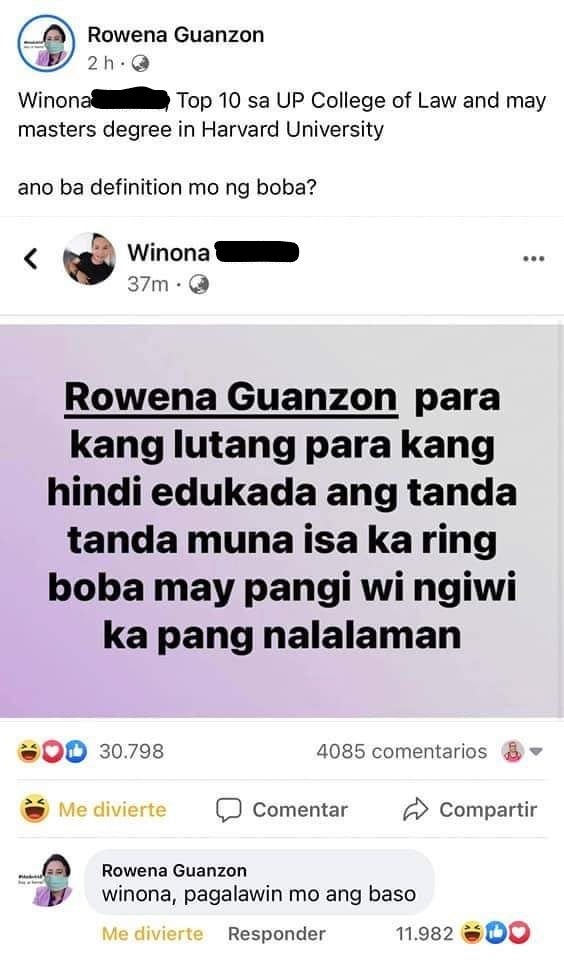 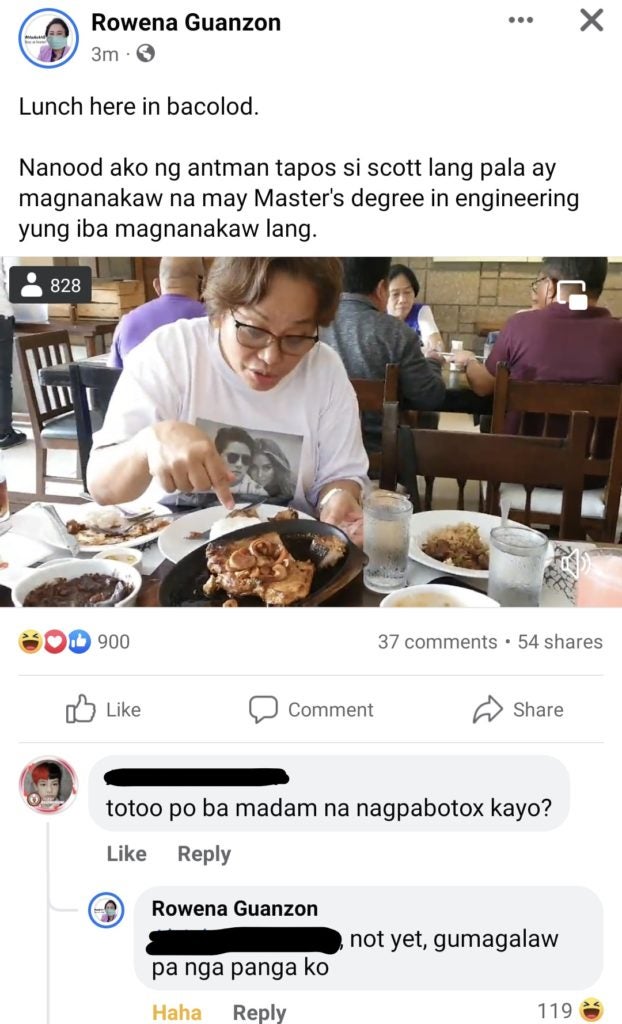 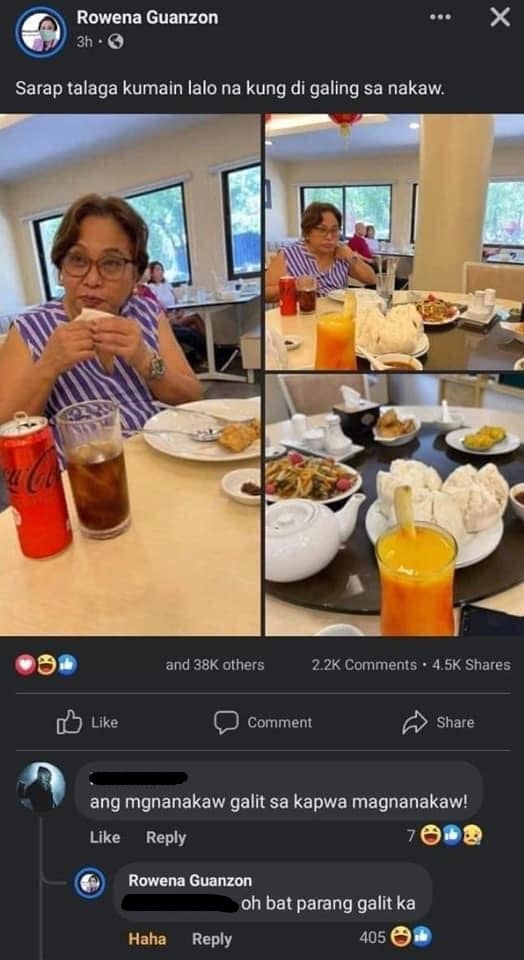 A private Facebook group called “Mga Anak ni Bing Guanzon” (The Children of Bing Guanzon) has also gone viral and being the group admin herself, she once called the attention of members who want to help her screen and approve pending joiners, as she gets at least 3,000 requests daily. This page is where Guanzon shares stories and videos about anything politics, interspersed with photos of herself eating, dancing, or updates about what she is up to in between joining the “pink rallies” around the country.

This “safe space” for people who support the same candidate is also a venue where they could voice out their political opinions, share light moments, and rally for each other. It has become a springboard of witty terms like #KakamBing (Kakampi ni Bing, or Allies of Bing in English), to signify her fans’ support and loyalty and #Bardagoats (Bardagol + goat) since kambing is the Filipino term for goat, and “bardagulan” is the game, thus the term.

Also called Guanzon’s Virtual Mansion, it is also where she calls members (currently at 46,200 and counting) “mga anak” (kids), and people would react, comment, share memes, and address her as “Mama Bing.” Indeed, “Mga Anak ni Bing Guanzon” has evolved into one happy and hilarious online home.

When trolls insult her or call her names, she doesn’t ignore such negativity because unfortunately, she has all the time in the world to retort with a sarcastic but funny way. And she enjoys doing it, even if it would mean the temporary suspension of her FB account. 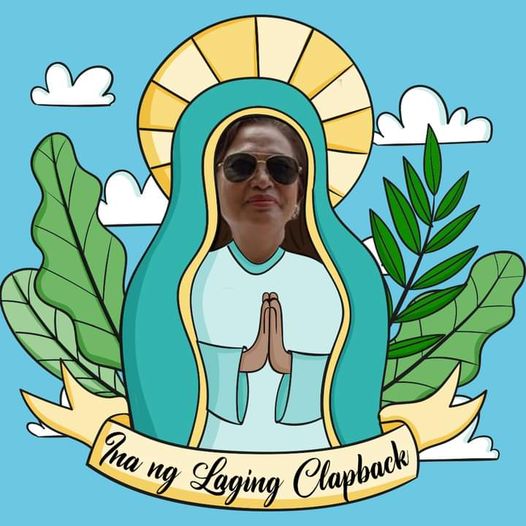 Guanzon knows that it’s crunch time before the elections, so she has amplified her efforts by joining campaign rallies nationwide, but does not forget to post, reply, call out people, and do daily “bardagulan” at any time in between her waking and traveling hours. Thus, she received a pink shirt from one of the KakaBings that said: “Eat. Sleep. Bardagol. Repeat.” She loved it.

While she has always been known as a woman of fighting words even before the advent of social media and the troll patrol, Guanzon always reminds people that the election is a crucial moment for the Filipinos, and that voting for the right candidate is not only a choice but also, to some extent, everyone’s power to fuel the change that we want to happen in the country.

She may be out of government service, but Guanzon has proven that she will never be out of the game. Her brand of bardagulan is smart, witty, comical, sardonic, and scornful depending on which spectrum of the rainbow one stands. Perhaps Guanzon’s savage mentality is even in line with what American comedian and writer W. C. Fields once said: “If you can’t dazzle them with brilliance, baffle them with bullsh*t.”

So, when a fan commented on her post saying, “St. Rowena of Bardagulan, please pray for us”. She answered: “Oks.”  Hail the Queen! 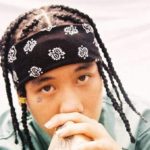 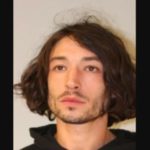