Last February 6, Facebook unpublished a page called “Catcalled in the Philippines.” The page’s has been an outlet for women to share their experiences of being sexually harassed in the country. It was created in June of 2016 by Raymond Peter Campiglio and had around 15,000 followers. According to Campiglio, he created the page because he wanted to help women who may have experienced various forms of harassment and catcalling.

“I just wanted to help. To give a platform for the scared and voiceless so that they won’t be terrified to share what was done to them, in the hopes that they would inspire other people to fight back and even prevent it.”

Right before his page was taken down, Campiglio called out two Facebook pages that sought to normalize rape culture by making jokes and posting demeaning photos and content about women. We wrote about one of those pages here. Catcalled in the Philippines even shared the article: 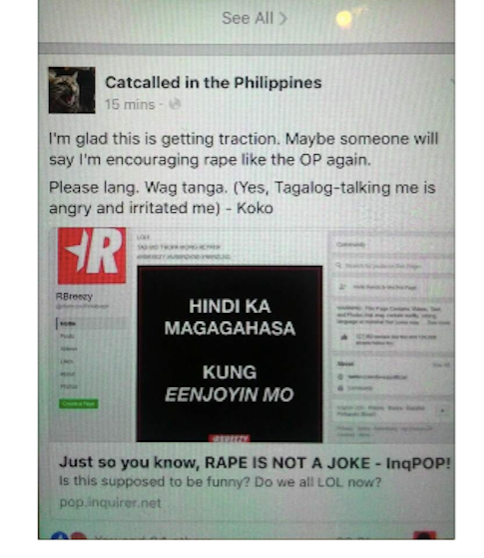 RBreezy was shut down by Facebook the same day after people reported their page. The handlers of the page can’t seem to get the memo, however, because they made another page for their offensive and misogynistic posts.

As a result of calling out these sexist Facebook pages, Catcalled in the Philippines was unpublished 3 days ago.

Apparently, Campiglio’s page was reported for bullying behavior by supporters of the groups he called out.

Here is what Campiglio had to say about his page being taken down by Facebook:

“I won’t deny that my heart broke when I was unpublished. All I really wanted to do was help and make a support system for all survivors of abuse and harassment. That was, at it’s core, what the page was all about.”

If anything, the fact that a page which sought to combat sexism was taken down so quickly speaks volumes about the inequality rampant in our country. It proves that there are a lot of sexists out there who seem to think that they are within their rights to speak their minds no matter how many people they hurt and offend.

The irony is that as they insist on their rights to free speech, they are quick to lash out against people who are practicing those same rights to speak against them.

That there are people who are so insensitive and so lacking in empathy that they are able to joke about rape is equal parts confusing and enraging, because as Campiglio said, “Respect isn’t Astrophysics. It’s shouldn’t be difficult.”