Enjoy the best of Chinese films for free at Shangri-la Plaza! 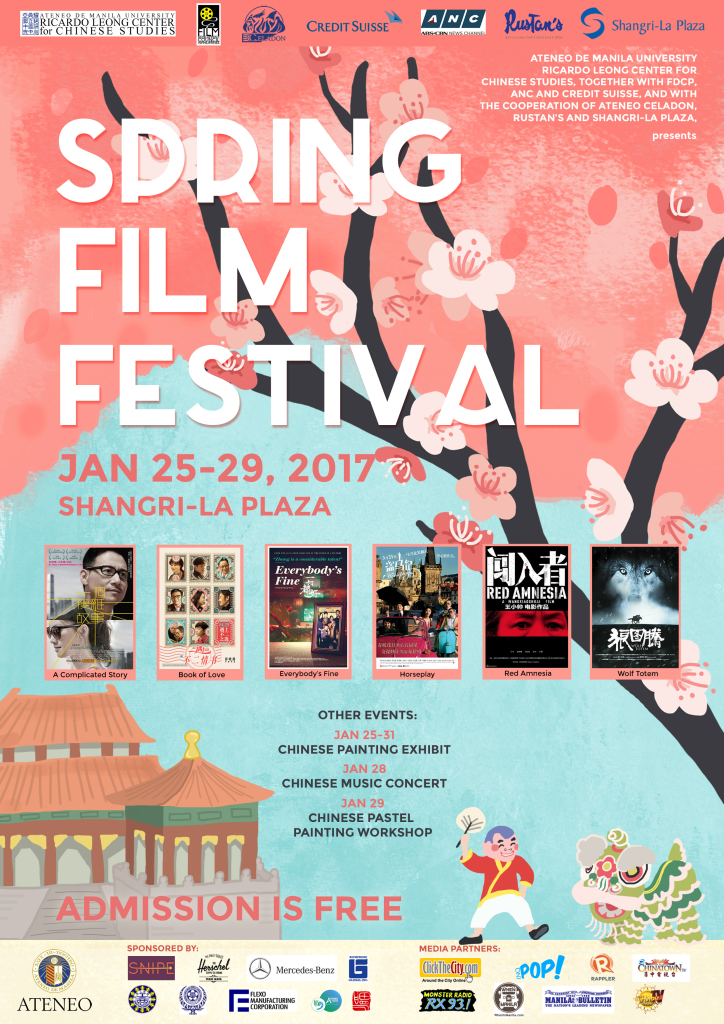 Mandaluyong City, Philippines—A grand celebration of the Chinese culture is coming your way as the Spring Film Festival returns to the Shang Cineplex at the Shangri-la Plaza for its eleventh year from January 25–29, 2017.

The Ateneo de Manila University’s Ricardo Leong Center for Chinese Studies and the Embassy of the People’s Republic of China, along with Manila’s top lifestyle destination Shangri-la Plaza, and Ateneo’s foremost Chinese organization, Ateneo Celadon, have prepared films of different genres: from comedy, thrillers and more, to showcase the finest of modern Chinese film culture.

Join lonely father Guan Zhiguo on a cross-country trip around China in the comedy, Everbody’s Fine, as he visits all of his children, regardless of whether or not they actually want to be visited.

Witness the Horseplay of an unlikely trio consisting of a television hostess, a master of disguise and a young detective in a hilarious chase around Europe in pursuit of a priceless, missing artwork.

Catch the inaugural drama film by the Hong Kong Academy for the Performing Arts, A Complicated Story, a story of a young woman who accepts the lucrative offer of a local power couple to become a surrogate mother. Things get complicated when the wife of the couple decides to terminate the agreement, consequently the pregnancy.

The third and final film of director Wang Xiaoshuai’s Cultural Revolution Trilogy, Red Amnesia, features an elderly widow who is plagued by mysterious and anonymous phone calls that she believes to be related to the sins of her past.

Romance film, Book of Love, also known as Finding Mr. Right 2, follows Jiao Ye, a casino hostess from Macau and Daniel Luo, a real estate broker from Los Angeles, who ends up exchanging anonymous letters in a twist of fate brought upon by an elderly gentleman residing in London, who quite enjoys the art of matchmaking.

A Chinese-French collaboration based on the novel by Liu Jiamin, Wolf Totem, follows Chen Zhen, a student from Beijing, who moves to the country-side of Inner Mongolia and learns the importance of the bond between wolves and the Mongolian nomads, which is unfortunately threatened by politics and human civilization.

The Spring Film Festival is held annually by its organizers and aims to promote modern Chinese language and culture amongst the youth of mainstream Philippine society through Chinese films. It’s the cultural event of the year that you won’t want to miss!

For more information about the event, please follow the Spring Film Festival Facebook page: https://www.facebook.com/SpringFilmFestival/ or visit the Ateneo Celadon Page at https://elements.ateneo-celadon.org/
Schedule of Showing in Shangri-La Cineplex