Three eccentric, blue-skinned men headline a show that is equal parts slapstick comedy, philosophical performance art and techno rock musical. Guests are in for a crazy night with the world-renowned Blue Man Group, who are here for a two-week run from September 14-25 at The Theatre at Solaire.

The group performs interactive art installations that experiment with unique sound and visuals. UItimately, these works of art explore the question – what is essentially human? 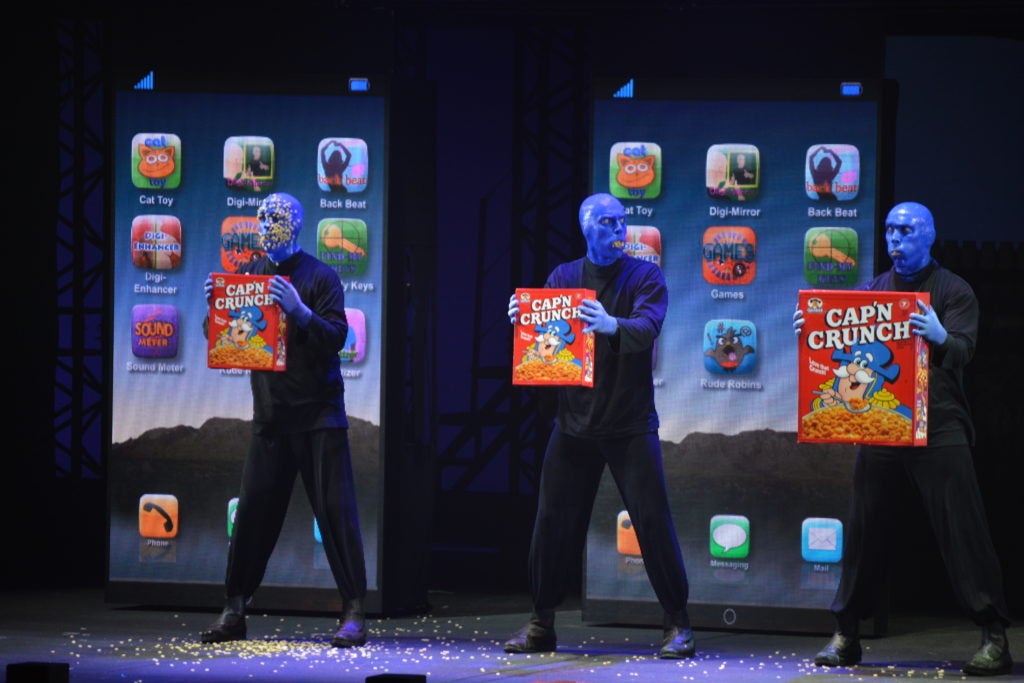 Yes, that was cereal stuck stuck on his face thanks to the blue face paint.

The show acknowledges society’s screen addiction by incorporating giant screens that resemble mobile phones in their act. They experiment with amplified sound by snacking on similarly giant boxes of Cap’n Crunch cereal. 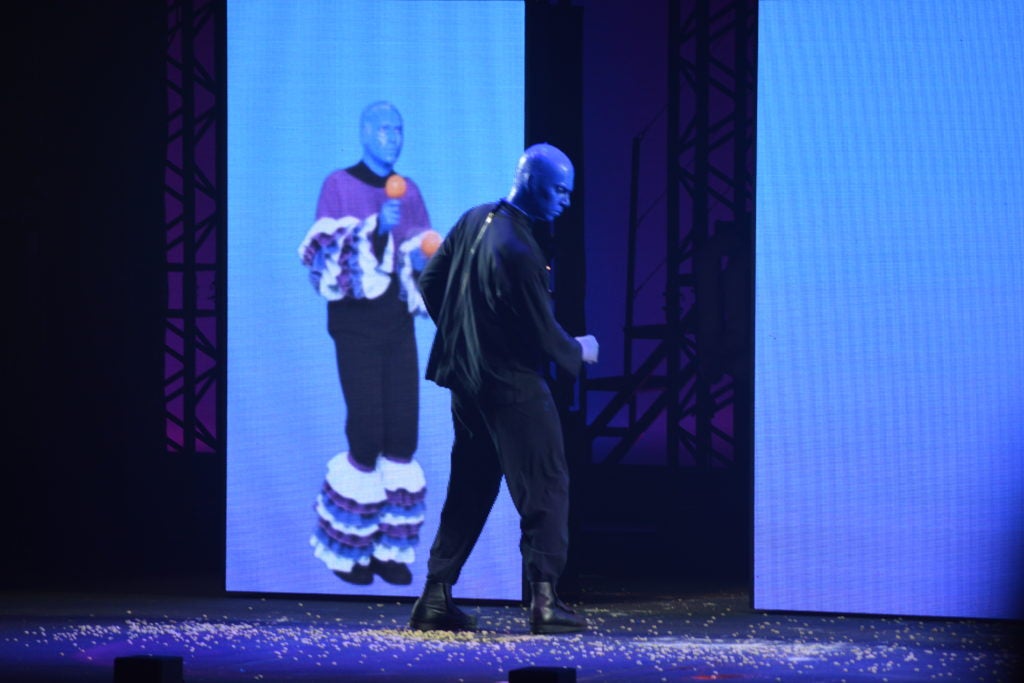 The performers show off their impeccable timing in this eccentric digi-mirror segment. 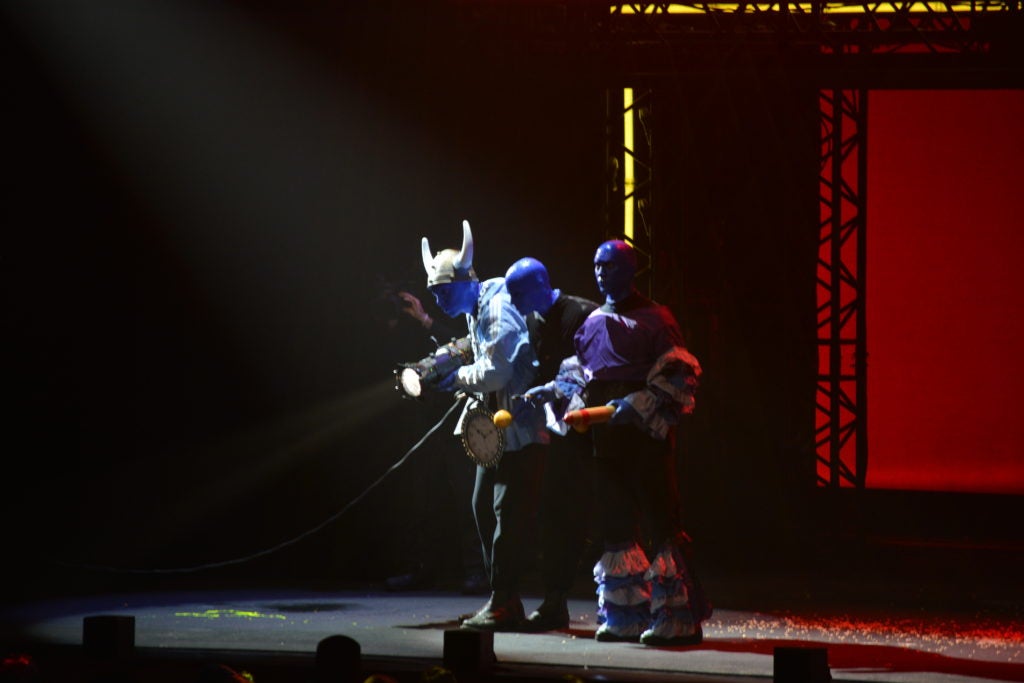 They make a fuss over late attendees by pointing the spotlight on them and including a live video feed on the stage. 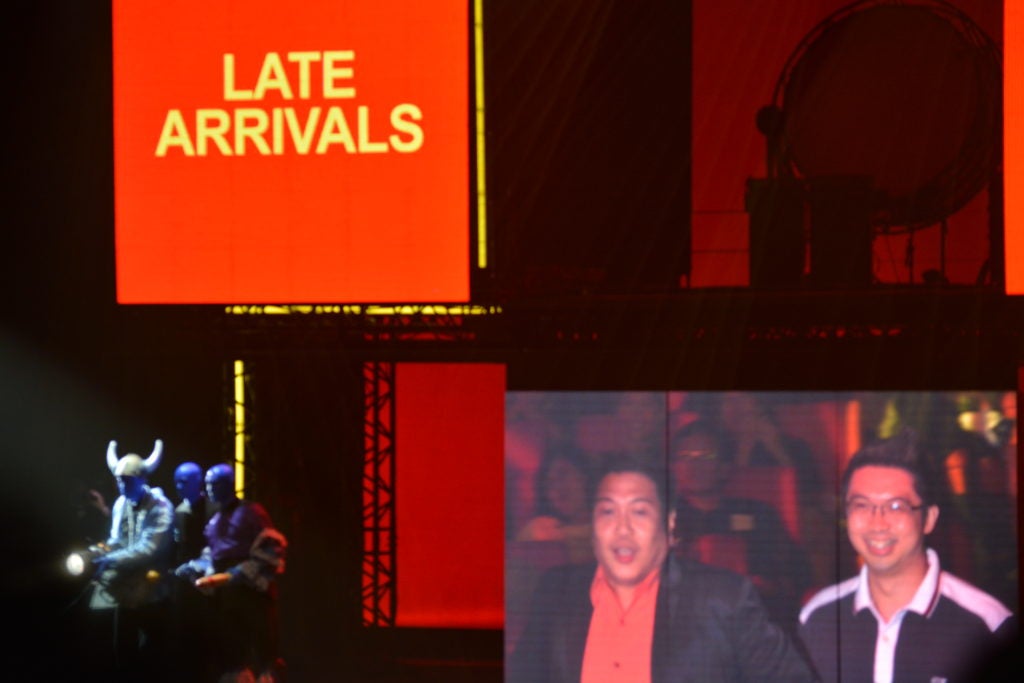 From a joke about the technological advancement that is modern plumbing, they manage to turn the stage into a festive light show using PVC pipes. The latter part of the show also uses a makeshift keyboard of pipes that is then illuminated by dreamy, rainbow-colored lights.  All this is backed by the group’s Grammy-nominated tunes.

Guests who purchased seats in the front row a.k.a. the Splatter Zone were also given raincoats to shield themselves from flying white Toblerone triangles, which the blue men tried to catch as they walked towards the audience.

This theme of playing with food can also be seen in one of the night’s most exciting segments. They picked out a lucky audience member to join them in a not-so-ordinary dinner table setting. Cue The Sex Pistols’ Anarchy in the UK. Chaos ensued: a balloon is sent flying towards the crowd and Twinkies were fed to each member of this unlikely family.

Fans of gross-out humor will appreciate what happens next – gooey, yellow slime (probably half-digested Twinkies?!) squirt out of their torsos. Yum.

The show’s sophisticated screen setup was perfect for a science lesson in visual perception and optic nerves. It also makes an art installation out of another lucky audience member, who was made to wear a white jumpsuit which was then splashed with their signature blue paint. They then “stamp” the man against a blank canvas. A statement that the human form is a work of art, perhaps? You be the judge. 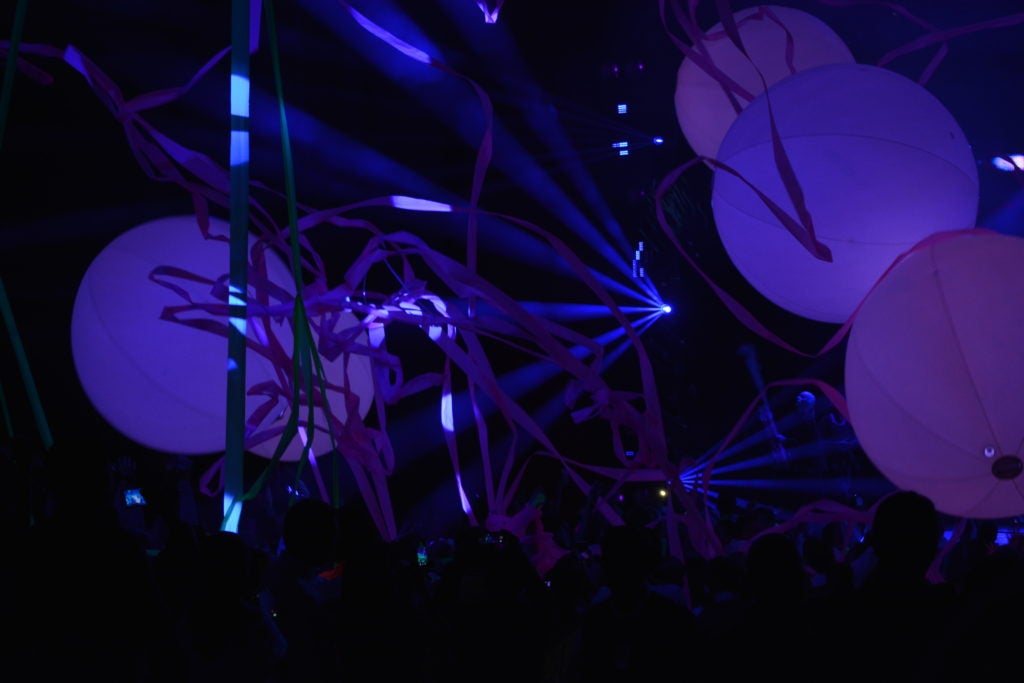 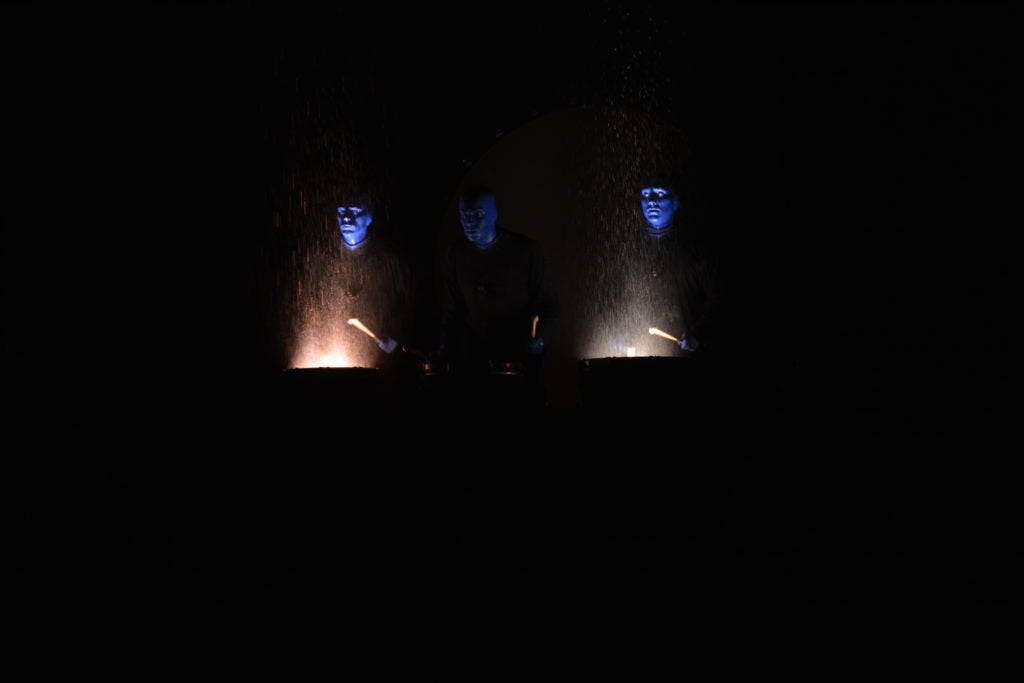 The three blue men play with colorful paint as they drum. 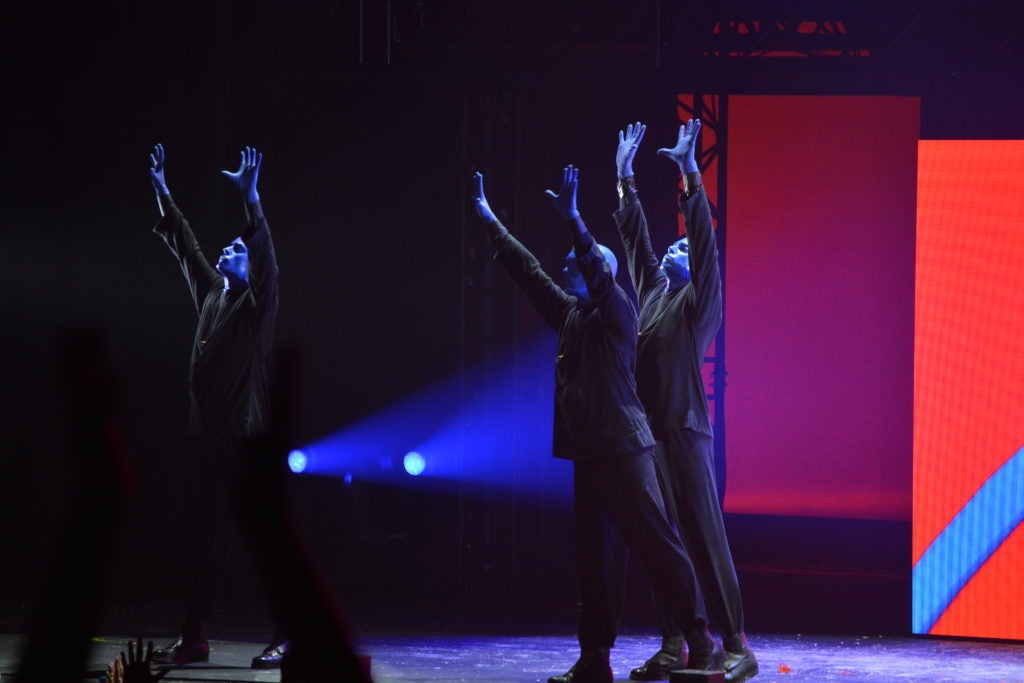 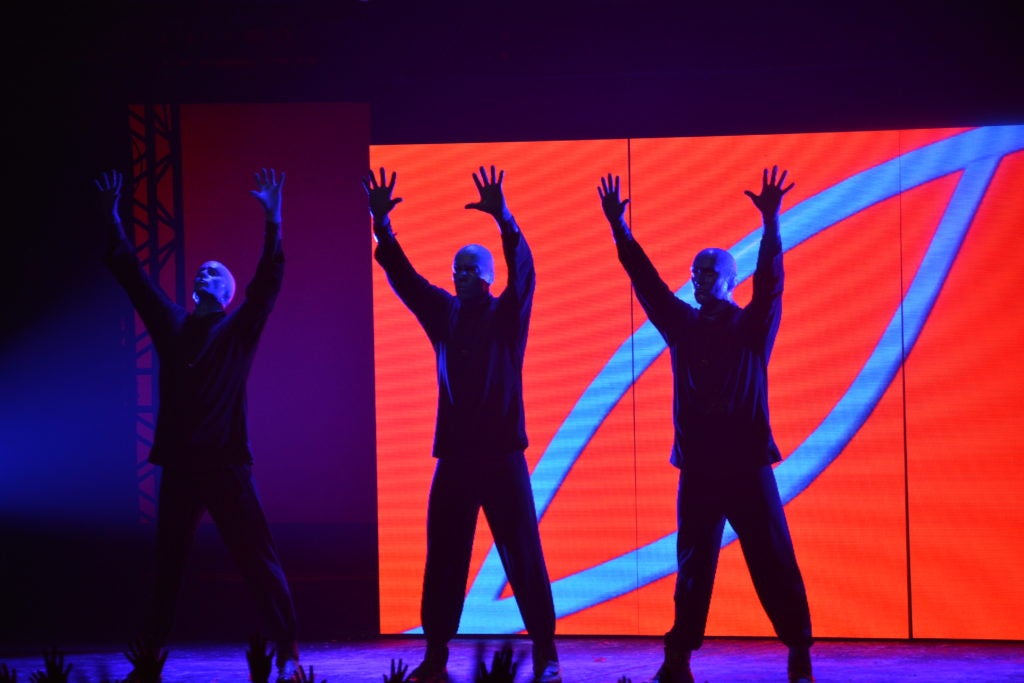 Saying goodbye with their signature gesture.

Blue Man Group Live in Manila is presented by Globe Telecom. Globe subscribers get a 20% ticket discount while students get 15% off.  For tickets, visit TicketWorld.com.ph.