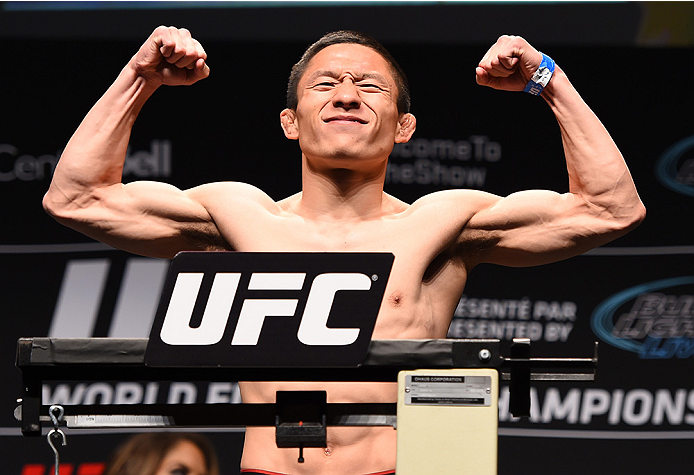 We spoke with former UFC flyweight championship contender Kyoji Horiguchi in an exclusive interview granted by the UFC and talked about his life, career, and his love of the outdoors. Known as “The Typhoon” for his explosive karate style, Horiguchi is currently ranked #3 in his weight division and will be competing against Russian fighter Ali Bagautinov in a 3-round undercard bout this October 15 at UFC Fight Night Manila 2.

One thing you’re also known for is your love for fishing. What is it about fishing that you enjoy?

I was born and raised in a place surrounded by nature, so fishing was one of the things I would do for fun when I was growing up. Now it has become a part of how I like to spend my leisure time.

Aside from fishing, what else do you like to do in your spare time when you’re not preparing for a fight? Any other interesting hobbies?

I love any kind of outdoor activities, like camping. In fact, I am talking with Steve Mocco, my wrestling coach at American Top Team, about going hunting after UFC Manila.

Have you always wanted to be a fighter growing up?

Not really, but I started getting interested in becoming a fighter when I saw Kid Yamamoto fight. I liked his aggressive fighting style.

How did you get started in martial arts?

I started Karate when I was 5 years old because my father forced me to.

Who were your early influences or inspirations?

Kid Yamamoto. He is my idol and was one of my coaches when I was a team member of Krazy Bee in Japan.

How would you describe your style as a fighter?

A lot of people see me as just a “Karate Fighter” because of my background and how I fought in the past. However, since joining American Top Team, I am becoming a complete mixed martial arts fighter.

At what point did you realize that being a mixed martial artist is something you’d like to pursue as a career?

I decided to pursue my mixed martial arts career right before I graduated high school.

What is your training regimen like? How would you describe a typical day?

I have to 2-3 training sessions from Monday to Saturday. What I do is different based on the training schedule that my coaches plan.

What kind of music do you like listening to while training?

You’re still young and have a limitless future ahead of you. What are your future plans for yourself, career-wise?

I want to become the 1st Japanese & Asian UFC Champion.

How about in your personal life? How do you see yourself in the future?

I would like to settle down and live in a place where I have easy access to the outdoors.

What advice can you give people who would like to get into MMA?

MMA is in an interesting sport to try and you will enjoy it. If you want to become a champion, however, you will need to sacrifice.

Do you have a message for your fans in the Philippines?

I love meeting fans from all over the world and I’m really excited to see my fans in the Philippines. My opponent, Ali Bagautinov, is a great and very aggressive fighter and we both like finishing our fights. So please do not miss our fight in the Philippines. It’s going to be exciting.