UFC Welterweight Stephen “Wonderboy” Thompson is currently in Manila on a whirlwind tour dubbed, “UFC & Cignal Present: On the Rise, Stephen Thompson” to highlight the brand’s expansion and growth in Asia. 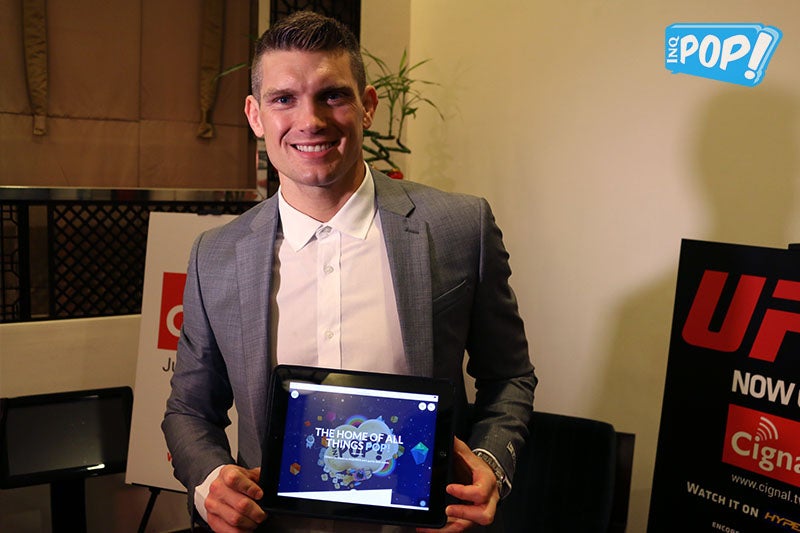 Thompson, fighting out of Simpsonville, South Carolina, is ranked #3 in the official UFC welterweight rankings, a rising star whose most recent win was a spectacular first round knockout of former UFC Welterweight Champion Johny Hendricks at UFC Fight Night: Hendricks vs. Thompson last February 6.

Sponsored by Cignal TV, the new home of the UFC in the Philippines, Stephen Thompson will be holding a series of public appearances including press conferences, interviews, courtesy calls, media guestings, and an open workout followed by a meet-and-greet session with fans at the SM Mall of Asia Music Hall on Thursday, February 25, 2:30pm.

InqPOP! was given a special one-on-one interview with “Wonderboy” himself, a moniker he earned after his very first fight at the age of 15 wherein he defeated a much older and experienced fighter. According to Thompson, “My dad threw me in deep. He wanted to see if this was what I really wanted to do. After the fight, the guy I beat was totally demoralized that he got essentially spanked by a 15-year-old in his first fight and made the comment, ‘I wonder why I got in the ring with that boy.'” 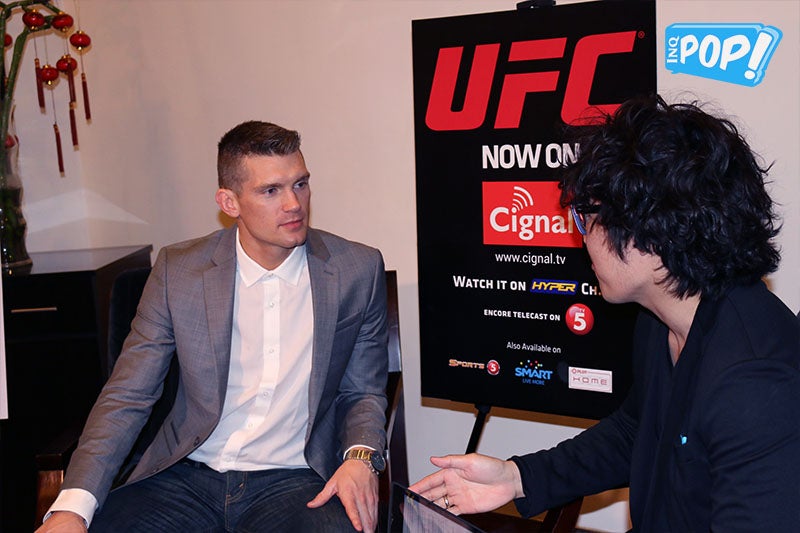 InqPOP!: Welcome to Manila! It’s your first time here. How do you find it so far?

Stephen Thompson: Yeah, today was our first day of going out and visiting and walking around the malls. I think it’s beautiful. The weather’s great, the fans are amazing. Just walking down the street people are yelling “Wonderboy,” taking pictures with everybody… it’s awesome and definitely has the potential of being a place for the UFC to come and have one of their shows. I would definitely love to come and fight for you guys.

IP: Is there anything you’re looking forward to doing while you’re here?

ST: Actually, Friday we’re going to one of the beaches, one of the islands here, Punta Fuego. I heard it’s very nice so I’m looking forward to that. I’m also looking forward to doing the open workout at the SM Mall of Asia Music Hall this Thursday, February 25, at 2:30 in the afternoon so everybody can come in and watch and hopefully enjoy watching me do some submits, some karate stuff… it’ll be fun.

IP: You’ve had an extensive background in martial arts since you were very young. What’s it like growing up exposed to martial arts at such an early age?

ST: Growing up, I’ve got two brothers and two sisters, we all started at the age of three, and we had no say so. Growing up it was required in our house, you know? Living in a fighting family, my dad and my mom’s been running a martial arts school for 32 years, and at first it’s something I didn’t like just because I was kind of forced to do it. But I thank them everyday for keeping me into martial arts even if I wanted to quit.

I think that’s kind of a problem with a lot of people nowadays, it’s that they’re doing way too many things. You got people playing baseball and at the same time playing basketball, football, playing all these sports. And they’re never gonna be good at one of them. They may be okay at all of them, but if you wanna be great? You just stick to one thing. 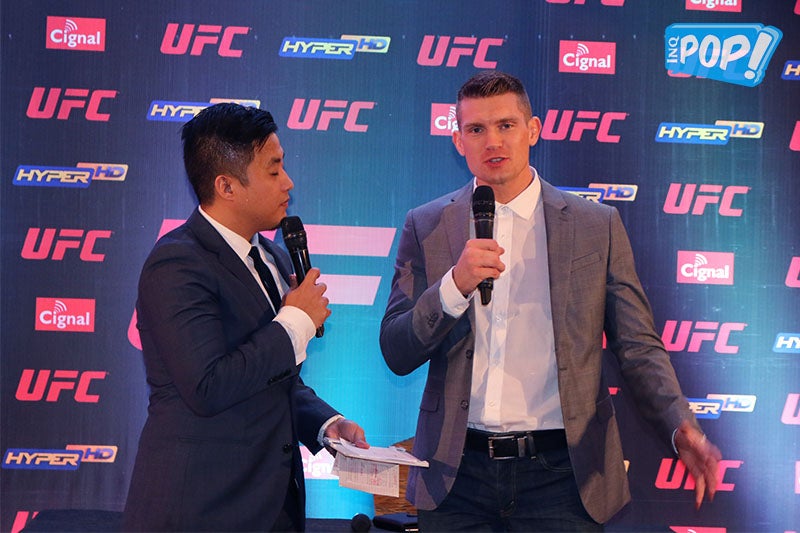 IP: When did you realize that this is what you want to do professionally?

ST: Actually my dad fought back in the 70s and 80s. My sister fought before me; they were my inspiration when I started competing. I started my full contact training at the age of 12, had my first fight when I was 15. I think then is when I realized that, you know, growing up, fighting at the age of 12, sparring with world champions… that was the nail for a very long time. Just getting hammered in the ring and getting beat up everyday and then it took several years and next thing you know I was beating these world champions. So I think then is when I made the decision, “You know what, this is something I wanna do for my career. Become a fighter. Growing up in a fighter family, that’s what we are, man. We’re fighters.”

IP: What’s a typical day for you like if you’re training for a fight? Take us through your routine.

ST: Most fighters, all they do is train. They train and they fight. Running a martial arts school in our family, I also teach martial arts as well. So I get up, I’ll be at the gym at the school around 9 o’clock. I’ll train for about an hour and, depending on what day it is, we’ll determine whether I’m doing jiu jitsu or wrestling or striking. After that, I’m doing business stuff for the school. I’m writing kids’ cards who maybe weren’t in class that week, maybe they were sick, just to encourage them to get back to karate. 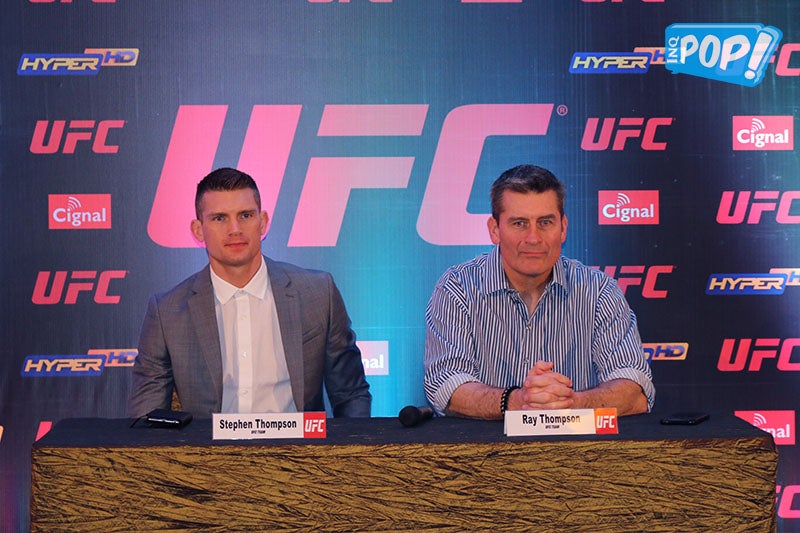 People nowadays… they’re doing way too many things. And they’re never gonna be good at one of them. They may be okay at all of them, but if you wanna be great? You just stick to one thing.

And then we have an after-school pick-up. So we pick up kids from school, we bring them back to the karate school… so I drive the bus picking up kids from school, bringing them back, helping them get ready for their class during the day, helping them out with their homework, and I’ll train again at noon. 12 o’clock, train for about an hour, jiu jitsu or wrestling. And then I teach classes from about 4 to 8 o’clock at night and from 8 to 9, another training session. So I train about three times a day and in between that, I’m teaching martial arts. I love it.

IP: What is it about MMA and martial arts in general that you enjoy?

ST: You know, I just like the lifestyle. What the martial art teaches. Most people think that martial arts is about beating each other up and people think it’s violent. And it’s not. It’s teaching people to defend themselves. People do it for different reasons: for self defense or to get in shape or building coordination. And it’s good for all of that, you know? Teaching kids when and when not to use martial arts, showing respect, courtesy, integrity, self-control, perseverance, and enjoying an indomitable spirit. That’s what martial arts is about.

IP: A lot of people, like probably 99% of the population will never know what it feels like to fight inside the octagon. Can you tell us what it’s like?

ST: I should start while waiting in the back. It’s an experience that the world will never experience. Only a very small percentage will know what it’s like to step inside the octagon. And it’s probably the most scared I’ve ever been in my entire life. I’ve got over 60-something fights, kickboxing and MMA combined, and every time I step out there it’s, you’re thinking to yourself, “Why am I doing this?” But as soon as you step out there in the Octagon, and they close that gate, I feel at home. This is what I’ve been training for and I have all the confidence in the world and that determines how I train. That’s something I learned training with champions such as George St-Pierre, Chris Weidman, all these guys. There’s nothing like it. 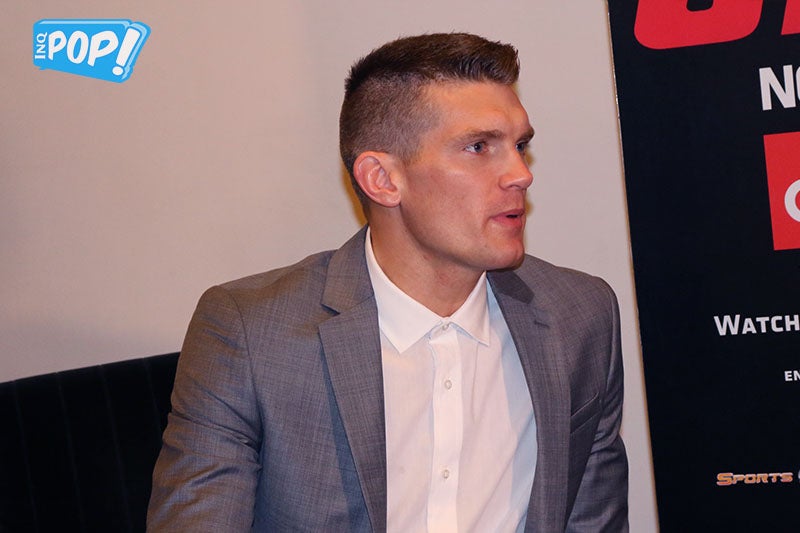 Most people think that martial arts is about beating each other up and people think it’s violent. And it’s not. It’s teaching people to defend themselves.

Even if you could just pick somebody, not even a fighter, but just step in the Octagon with everybody watching you… it’s a crazy feeling. You have thousands of people watching in the stadium and millions across the world cheering for you to get knocked out or cheering for you to win. But when you’re in the Octagon, there’s no thinking. It’s just reaction. My last fight, it finished in the first round but I had to go back and watch the fight to remember what I did. Definitely a really cool thing to experience. I’m glad I do what I do.

IP: Do you have any message for your fans in the Philippines?

ST: You know, especially for the fighters, guys who wanna fight… find a good gym. A good positive gym with good training partners. That’s one of the reasons that makes me successful. I can have a positive team that backs me, who keeps me focused on my goals. So find a good gym, find a good school that teaches that, instills that in students. If fighting is something you wanna do or if it’s something you wanna do recreational, I think everybody should do it. At least go out there and try.