Magnaye spoke up and shared a statement on her personal Twitter account regarding Soberano’s voice acting delivery.

“Liza Soberano’s voice is perfect for the character. It’s got a great balance of youthfulness and grim,” Magnaye tweeted.

Magnaye also emphasized that Soberano is not monotonous and has a dynamic delivery, thus, a bit of exaggeration could have added more dimension.

People have been attacking Soberano as the chosen voice actor for the character ever since the trailer was released, but Magnaye noted that being an actor and a VA are two different things, so she believed that one of the problems that occur could have been a direction thing.

“Whoever was directing her during the recording sessions could have guided her a little more to explore different deliveries, but that’s just what I think,” she added. 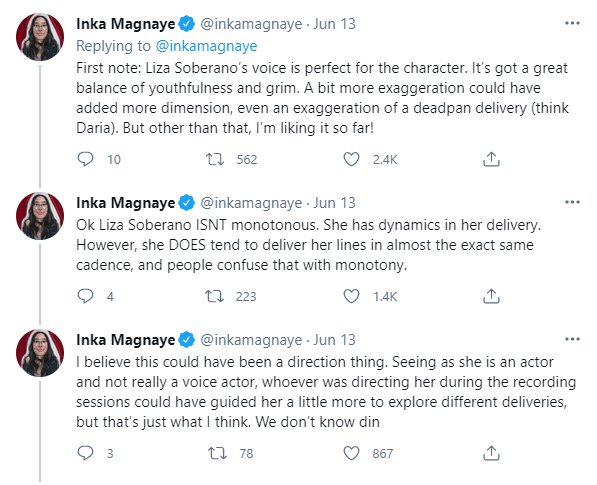 In another tweet, Magnaye went to compare Soberano and Filipino-American actress Shay Mitchell in their dubbing skills.

“I like how Shay Mitchell does the deadpan badass delivery! Deadpan blase, deadpan annoyed, deadpan snarky. The little nuances are so satisfying,” she continued.

According to Magnaye, Soberano could have benefited from these nuances, but she also understands that it is not easy.

“Not even all VAs can do that. It’s something very trainable though, and an actress like her will surely be able to get that down with practice!” she emphasized. 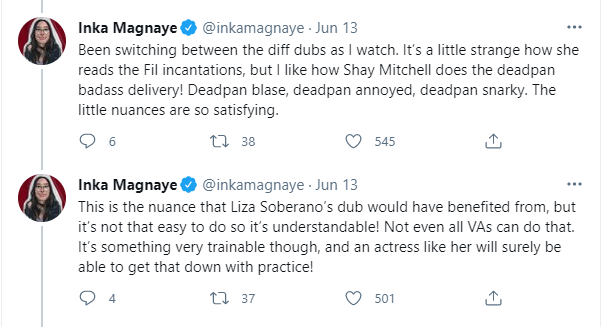 Meanwhile, producer and director Jay Oliva broke his silence against the comparison between Soberano and Mitchell.

“Both @shaymitch and @lizasoberano brought unique performances [that was] better than I could have imagined.” he wrote on his personal account.

For Oliva, he believes people should focus on how Filipinos mythology and lore were shared and put into a discussion across the globe.

“So whether you like one more than the other or if you like them both, I think the thing to celebrate the most is that we have brought Filipino mythology and lore to the world,” he noted.

Oliva also said that all language actors who played the character of Alexandra Trese are all awesome in their own ways. 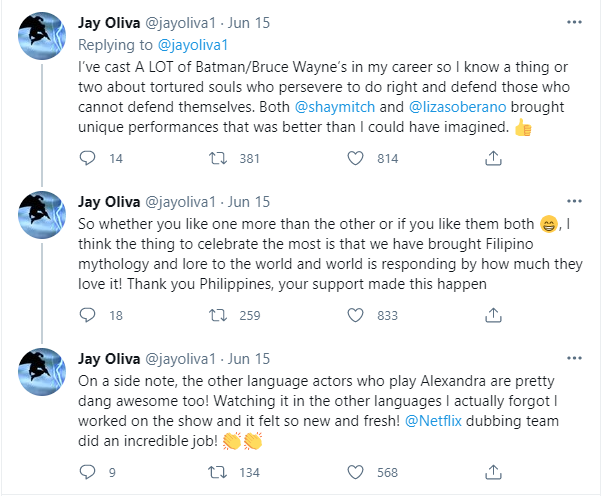 “Trese” is the first anime adaptation on Netflix from the successful Filipino Komik series. 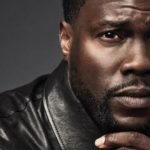 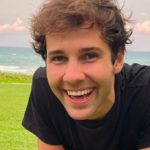