We’re not even halfway through 2021, but it’s already been a wild one so far. It’s been over a year since the COVID-19 pandemic hit and we’re still dealing with it. Now, it looks like we’ve got another problem — and it’s out of this world… literally.

Recently, a big rocket from China was launched totally uncontrolled and it could fall back down to Earth, possibly hitting us with chunks of metal in a few days. Yikes. Why is no one talking about it? 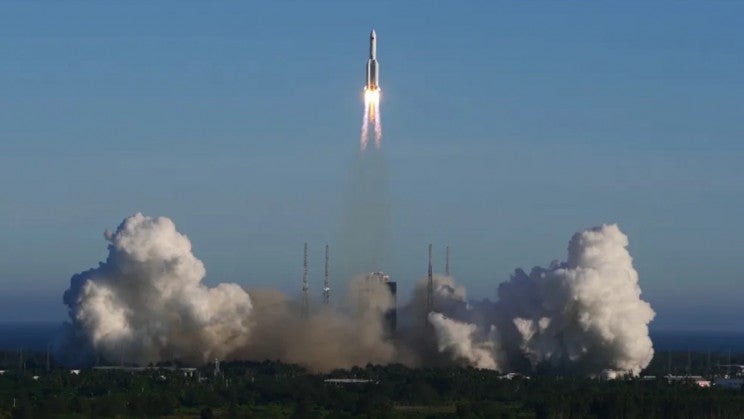 On April 29, a Chinese rocket called ‘Long March 5B’ (also known as “rocket 2021-035B”), launched the Tianhe module of the Chinese Space Station (CSS), which is expected to be fully operational by 2022. The problem is the rocket that launched it is in a temporary orbit now — meaning it will become one of the biggest uncontrolled re-entries of a space machine.

According to the European Space Agency, it’s possible that the rocket will fall back down to Earth on May 9th, at around 17:23 UTC (May 10th, 1:23am in the Philippines). However, there’s a margin of error by approximately one day.

This wouldn’t even be the first time a ‘Long March 5B’ will make an uncontrolled re-entry. Last May, Jim Brindestine, who was NASA’s administrator at the time, commented on another re-entry saying that it was “really dangerous” and it was very fortunate that no one was harmed.

Astrophysicist Jonathan McDowell at Harvard University’s Astrophysics Center told The Guardian of the consequences this uncontrolled rocket could have.

Last time a ‘Long March 5B’ rocket was launched, it resulted in “big long rods of metal flying through the sky and damaging several buildings in the Ivory Coast,” but luckily no one got hurt. McDowell, along with many other experts, warn that big parts of the rocket core could fall over inhabited areas.

Currently, the rocket’s orbit flies over New York, Madrid, and Beijing, and it could re-enter anywhere on its present course. McDowell has been posting updates on the rocket’s status and orbit on social media.

This morning's data on the altitude-versus-time of the Tianhe / CZ-5B objects. The core stage orbit continues to slowly decay as expected. pic.twitter.com/E8EPJ9yzRu

You can also check the rocket’s current and projected trajectory on websites like orbit-ing.now and Aerospace.

To this day, the largest ever uncontrolled re-entry of a space machine was back in 1979, when parts of NASA’s Skylab space station (which weighed 100 tons) fell to Earth. The US space agency couldn’t pin down where exactly it would fall on our surface.

In 2018, the 8.5 ton ‘Tiangong-1’ which was China’s very first space station, also made an uncontrolled re-entry.

In a few days, Long March 5B will once again make an uncontrolled re-entry and it could possibly hurt people, so how come it’s not being discussed?

UPDATE: A large segment of the rocket recently re-entered the Earth’s atmosphere and disintegrated over the Indian Ocean.

‘Your Yoga partner is in an animal shelter,’ says PETA ad