If you don’t know why your social media timeline is freaking out over GameStop blowing up the stock market, then you’re probably just as confused as we were.

Long story short: small retail investors just successfully played the system, beating larger and more powerful traders at their own game — all thanks to Reddit. Quite a number of people are arguing that this is a turning point in history. So here’s the simplified explanation for everyone wondering why this is such a big deal.

Trying to figure out what’s going on with Game Stop like pic.twitter.com/cD4AcKOXHN

Before we talk about GameStop, you first need to understand some basic concepts in the stock exchange. Let’s first define ‘day trading‘, which is the act of buying and selling a stock within the same day or even multiple times over the course of a day. The goal of day trading is to make numerous small profits throughout the day. It is a controversial concept in the stock market industry, especially in Wall Street, because it involves significant risk. While it is a practice that average people can get into (provided that they have sufficient knowledge), amateur day traders can fall victim to internet scams.

Next we have ‘short selling’, which is essential to this story. Short-selling is a strategy used by day traders where they bet that a stock is going to fall. To better understand short-selling, here’s a situation inspired by another tweet attempting to explain this same concept. As a day trader, you borrow one share from your broker which is priced at ₱100. You then sell it immediately for the same value. After a while it drops to ₱70 so you buy the stock at a lower price, and then return the borrowed share to your broker. When you first sold the share you earned ₱100, but you bought it back for only ₱70. So your profit is the ₱30 you kept in the end.

Concluding that stock market crash course, here’s where GameStop finally comes into play. Due to our world’s changing business landscape, consumers no longer need to go to physical stores to buy what they need. This has lead companies like GameStop to find a decrease in its sales. The video game retailer was expected to lose money this year and next. 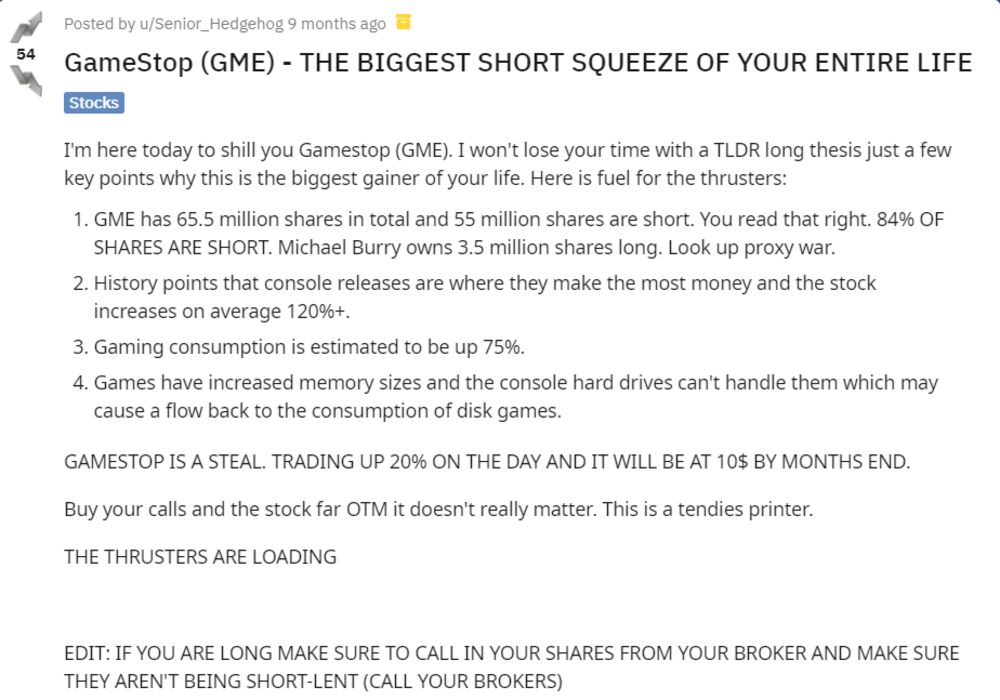 Someone on Reddit noticed that a hedge fund (an investment structure set up by an adviser) took a huge amount of short trades against the company. A group of young day traders on r/wallstreetbets then decided to join forces to and buy as much GameStop stock as possible. This made the price rise astronomically until the hedge fund eventually began to lose billions. As of writing, its stock has gone up by 134.84%. The hedge fund was forced to declare bankruptcy because it couldn’t keep up with its loses.

Now, people from the big leagues like Wall Street are saying that this should be illegal. It seems like they’re starting to worry about how the masses can actually make an impact on the stock market.

robinhood decided this morning to suspend buying of AMC and GME stock because regular people were making too much money, proving once again that any time the poors find a way to get any sort of financial foothold in this world the billionaire class will move swiftly to crush them

Lol at all these wall street bozos suddenly not liking the fundamental idea of a free market because their billions are getting sucked dry by the working class. Redistributed wealth is my kink!!!! Keep it goin baby!!

ain’t SHIT real about this economy it’s all bullshit designed to keep the majority in poverty and fighting each other, once we get sumn of our own it’s time to change the rules. Fuck that

If I was a Hedge Fund losing billions to Reddit shitposters, I would get a second job driving for Uber, cut out the Starbuck's, and skip the avocado toast.

GameStop sitting amongst Tesla and Amazon after reddit users make it a Fortune 500 company pic.twitter.com/AVUtcjs6gl