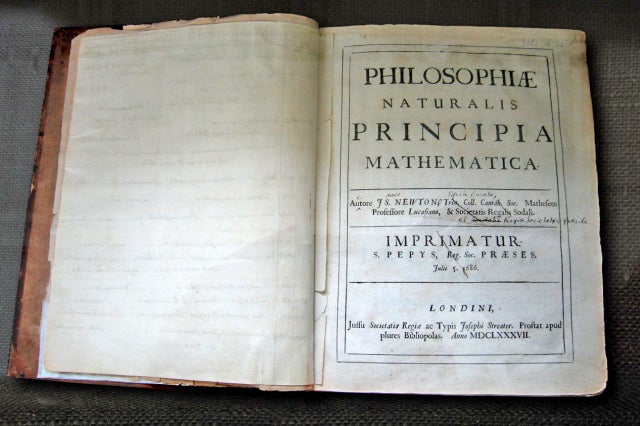 For years, first edition copies of Isaac Newton’s “Philosophiae Naturalis Principia Mathematica” have been highly sought after by collectors due to their extreme rarity. However, researchers have found that there may be more copies of the groundbreaking science book’s first edition out there than previously thought.

Nothing could have suggested that this three-volume work in Latin would revolutionize our understanding of the universe, detailing the founding principles of Newtonian mechanics and the law of universal gravitation. In fact, legend has it that when two students spotted Newton on the street in Cambridge, one of them whispered, “There goes a man who wrote a book that neither he nor anybody else understands.”

For a long time, the scientific community believed that the complexity of “Philosophiae Naturalis Principia Mathematica” — often simply referred to as “the Principia” — may have at least partially explained why the print run of the book’s first edition, published in 1687, was so limited in number. The last census of owners of the first edition, published by Henry Macomber in 1953, identified just 189 copies.

Now, researchers at the California Institute of Technology (Caltech) and the University of Mannheim in Germany suggest that this figure largely underestimates the success of the first edition of the “Principia” on its initial release. The scientists managed to identify almost 400 copies of the first edition in libraries and bookstores from Budapest to London and from Zagreb to the Vatican.

“Our efforts thus far have uncovered 387 copies in 27 countries, including 91 auctioned copies. We were unable to locate the current whereabouts of 13 copies reported by Macomber, partly because many copies have changed hands multiple times in the intervening decades,” wrote Mordechai “Moti” Feingold and Andrej Svorenčík in an article published in “Annals of Science.”

Sought after by collectors

This new estimation suggests that Newton’s book had “a much larger print run than commonly assumed” and leads the researchers to believe that “there existed a wider, and competent, readership of the Principia from the start.”

Certain recently discovered copies of “Philosophiae Naturalis Principia Mathematica” contained annotations by several readers, potentially contradicting the common assumption that this first edition was only of interest to a handful of mathematicians.

“The new empirical evidence presented in our census enables a reassessment of the early diffusion of the Principia in Europe which, in turn, would necessitate a major refinement of our understanding of the contribution of Newtonianism to Enlightenment science,” concluded Feingold and Svorenčík.

These new discoveries could also have repercussions on the auction market for first edition copies of “Philosophiae Naturalis Principia Mathematica,” which can sell for six-figure sums. One copy sold for $3.7 million in 2016 at Christie’s (around P178.3 million), setting a new auction record for a printed scientific book. CC