Every 40 seconds, someone dies of suicide, making it one of the top leading causes of death globally for people of all ages every year. For each suicide death, there may be more than 20 others attempting suicide. It is also estimated that more than 130 people suffer intense grief or are otherwise affected for each suicide. In the Philippines, an earlier report from the World Health Organization estimated a suicide rate of 2.5 men and 1.7 women per 100,000 Filipinos.

The World Suicide Prevention Day (WSPD) is observed every September 10th annually to raise awareness that suicide can be prevented. MentalHealthPH is one with the International Association for Suicide Prevention (IASP) and the global community in promoting help-seeking behavior, preventing suicide and suicidal risks and behaviors, and advocating for increased investment in suicide prevention activities. 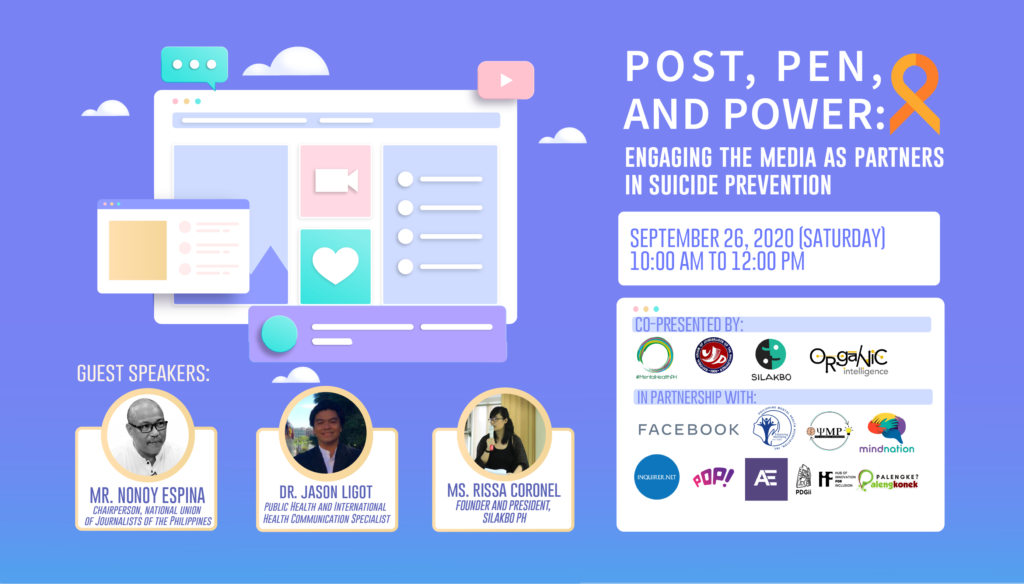 The media, both traditional, print, and digital, play a critical role in building awareness and preventing suicide. Their wide reach and platforms make them key players in providing appropriate information and safe messages to the community. Media engagement in suicide prevention, if done correctly, has been known to be effective in limiting imitation or “copycat” behavior among at-risk individuals.

With this years’ WSPD theme “Working Together to Prevent Suicide”, MentalHealthPH recognizes the valuable contribution of media professionals in this fight against suicide. Through multi-sectoral approach and strategic collaboration and using a mental health promotion perspective, we can be a step closer in saving one’s life to suicide. In continuation of the observance of the World Suicide Prevention Day (WSPD), MentalHealthPH will hold a two-hour orientation-webinar on the role of media in suicide prevention on September 26 from 10 AM to 12 NN. This online activity aims to orient media professionals, students, and organizations on how to report suicide responsibly, highlight help-seeking and suicide prevention interventions, and take care of one’s self.

As we discuss this timely topic this Saturday we will be joined by Mr. Nonoy Espina, Chairperson of National Union of Journalists of the Philippines, Dr. Jason Ligot of Organic Intelligence, and Ms Rissa Coronel, Founder and President of Silakbo PH. For more details, visit MentalHealthPH’s official Facebook page.

This webinar is brought to you in partnership with: Facebook, Philippine Mental Health Association, Inc., Your Millennial Psychologist, MindNation INQUIRER.net, InqPOP, Assortedge, Hub of Innovation For Inclusion and Palengkonek.

Mental Health PH
Working together to prevent suicide: MentalHealthPH highlights the role of media in suicide prevention
INQPOP! Stories we think you might also like: