Bubble Gang: A laugh to last a lifetime

The Filipinos’ resilience is evident on how they still manage to smile and laugh easily despite any situation. But when it comes to our choice of comedy, we are quite discriminating and are very hard to please.  Seriously, doing comedy is no laughing matter; the timing should be right if not perfect; the punchlines should involve a ridiculous, out-of-the-box kind of oomph, and the script should always be innovative and relevant to the times. This was what Comedy King Dolphy and the rest of the Filipino funnymen have imbibed, the same brand of comedy that Bubble Gang has been offering the Filipino people for 25 years now, making them a laugh above the rest. 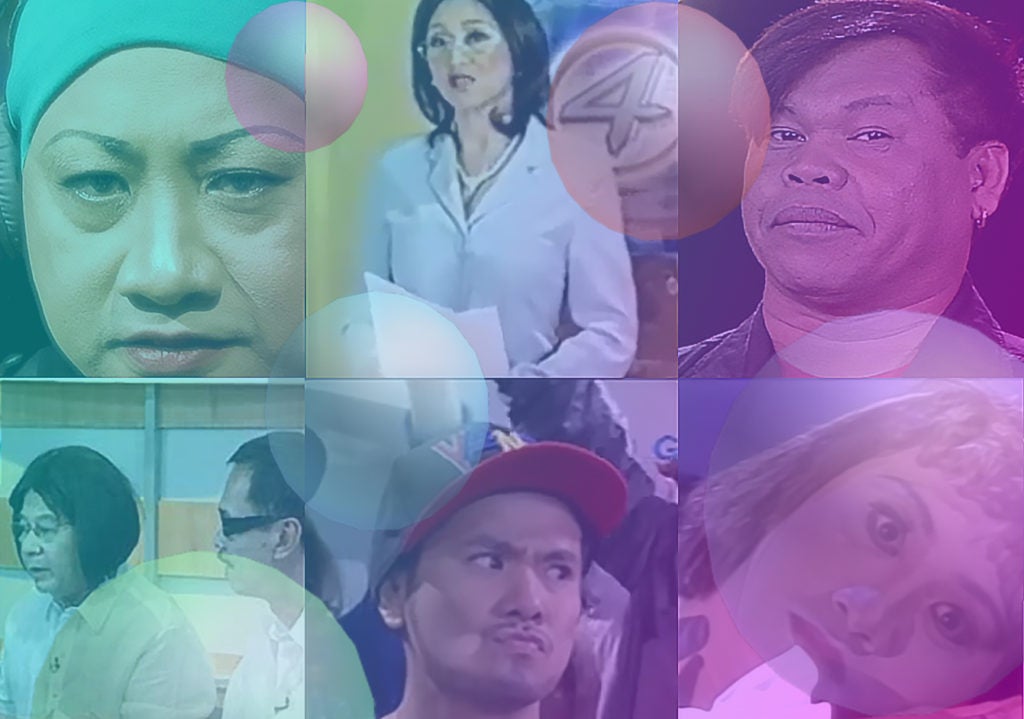 The birth of Bubble Gang

The show first grew in popularity when it introduced a segment called “Myusik Tagalog Bersyon” (MTB, a parody of the original Music TV or MTV) and Music English Version (MEV, where they translated English pop songs into Filipino) in 1996. But Bubble Gang gained more following when Michael V and another funnyman /writing genius Isko Salvador came up with the idea of spoofing a religious program “Ang Dating Daan” into “Ang Dating Doon”, which starts with a spoof of the well-loved Voltes V soundtrack. With this hilarious segment, they originally intended to quote the Bible, but because of religious restrictions, they ended up citing English fairy tales and Tagalog nursery rhymes and make fun of it.

Currently, on its 25th year, Bubble Gang is hailed as the longest-running gag show in Philippine Television, surpassing the feat of now defunct gag show “T.O.D.A.S. (Television’s Outrageously Delightful All-Star Show)” which also made Pinoys laugh for 8 years. It took years of experimenting and research until Bubble Gang finally found its own place, giving a ticklish tweak to anything—from new and current events, to TV programs, commercials, and just about anything interesting in the Filipino pop culture.

The show’s jingle OBB that has been altered three times quickly became a household tune. First it started with a rock ode Bubble Gang (Just Chew It!)”, which figured prominently from 1995-1997. The second jingle was a reggae version, “Chew (The Bubble Gang Ye!)”, and ran from 1997-1999; and the third one was “Bubble Gang (Pwede!)”, an a capella rendition adapted from the Mexican, “La Cucarcha” and performed by Michael V and Alcasid, with the latter writing all jingles from past to present. 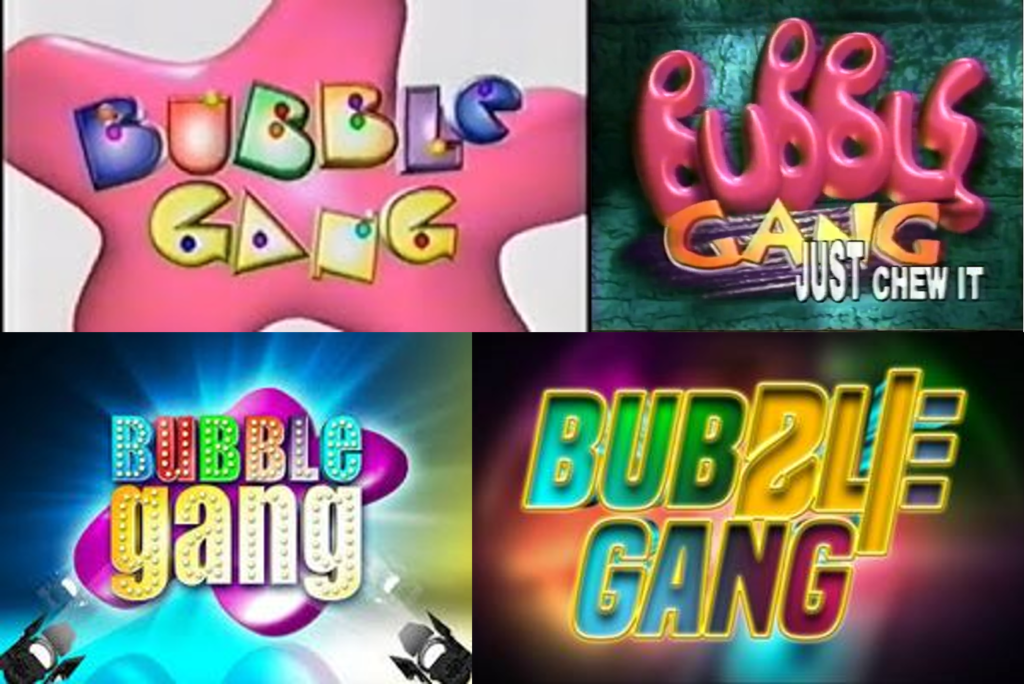 Doing comedy is a serious job, Michael V (or “Bitoy”) said, in an interview with GMA News Online. “When I was growing up, I would watch a lot of ‘John En Marsha’ but in movies, I saw how different Dolphy was. “He was a great influence, but I also spend time with my kid and other children in order to hone my talent and all the characters I play. They are my best critics,” he added.

Bubble Gang’s format accentuates on Filipino pop culture parody; however, skits and sketches are performed in a manner similar to other variety shows. Apart from spoofing commercials and other shows, they also feature satires of celebrity’s or politicians’ blunders. Some of the more famous parodies that won the hearts of the Filipino viewers were “4 Oras”, (a parody of GMA-7’s primetime newscast “24 Oras” and with Michael V playing Michael Ricketts for Mike Enriquez, Quinto as Bel Tiongco for Mel Tiangco, and Alcasid as Papaya Guano for Pia Guanio); “GNA Splash Report (to spoof GMA Flash Report where they throw  bucket of water to Ivan Submarina as Ivan Mayrina); and a skit entitled “Muchas Grasas”, about a poor family (“taong grasa”) who regard themselves as rich people and speak in English inside their shanties, to emphasize that sometimes, poor people have manners and some affluent families are filthy and “low class”.

The gag show has also made satires of Eat Bulaga’s popular noontime games like Pinoy Henyo (“Pinoy Gago”) and Laban o Bawi (“Yabang o Panget”), and Itaktak mo (“Idakdak Mo”). Even local and international TV shows such as Vicky Morales’ Wish Ko Lang was spoofed as “Trip ko Lang”, and even renowned talk show Oprah wasn’t spared from the gang’s wisecracks as they had their own spoof billed as ‘Okrah’. Michael V’s personal character concepts are “Sumbong-Sumbong kay Bonggang-Bonggang BongBong”, and “Tata Lino” (a parody of an hermit giving not-so-wise words of advice, which are funny and oftentimes borderline ridiculous, to those who seek for it0; and “Yours Truly, Junee Lee”, the character that is closest to Michael V’s heart because in real life, Bitoy said—like Junee Lee—he’s actually shy, awkward and always seem unprepared.

Other notable spoofs are those of local and internationals artists and their famous songs including “Mamaw by Kayo Kasi Eh” (Narda by Kammikazee), “Di na Magigisa” by Ang Bilas Ko  (Di na Nag-iisa by Regine Velasquez), featuring saute-cooking tips; “Chaka Nya” by Churang Cuneta (Sa Kanya by Sharon Cuneta); “Hala, Pack-up” by Eraseyourheads (Alapaap by Eraserheads), a parody about the real-life Eraserheads concerts where other members never appeared on stage;  and “Takubets” (a spoof of Imago’s Taralet’s). All lyrics are usually borne out of Bitoy’s genius, with some inputs of the Gang.

Lest one forgets how they literally translated famous international billboard chart-toppers such as “May Isa Na Namang Kumagat sa Alikabok,” (Queen’s Another One Bites the Dust), by their own band named Princess, with Michael V saying that there will be one and only Queen. “Bumabalik na sa Akin Ngayon” is another takeoff from Celine Dion’s It’s All Coming Back to Me Now. This is one particular translated song that I will always remember because the translated version was so funny and extremely witty at the same time. So, when it hits the part when Dion sings the lines “Baby, baby…If you touch me like this…”, Bitoy’s lyrics goes: “Sanggol, Sanggol…Kung hinipuan mo akong ganito”, performed in a straight-faced, serious manner.

But perhaps what really entrenched Bubble Gang in the hearts and minds of the discerning comedy loving Pinoys is the fact that Bitoy and the team know not only the pulse of their audience, but more so, what tickles their fancy. Some of Bubble Gang’s trade secrets are teamwork, and their desire to be at least two steps ahead of competition. They consider the gang as one big happy family who loves to laugh, and make other people laugh despite any adversity, including this pandemic crisis. But perhaps one of the secrets of Bubble Gang’s staying power, all these years, is how the show adapts, adjusts, and evolves with the trends or situations, crisis, or no crisis.

Comedy in the time of Covid

Entertainment industry, especially the mainstays at comedy circuit, is one of the most greatly impacted segments by the Covid-19 crisis. Even Bubble Gang went off-the-air last March 2020 to comply with protocol measures resulting from the enhanced community quarantine.

During these difficult times when people could use a little more laughter, GMA Network launched its YoüLOL comedy channel on YouTube to provide laugh-out-loud entertainment to anyone who deserves to laugh while on lockdown. In this channel, Michael V’s parody music videos from Bubble Gang will be included, to encourage audience participation in some segments. The cast of Bubble Gang also has segment called “Barangay Bubble,” where subscribers will request challenges from the cast.

A week ago, on August 21, Bubble Gang returned on air with brand-new episodes, giving viewers fresh comedy sketches and the most hilarious parody videos ever. Adapting to the new norm and using it to their advantage, the Gang filmed in their own homes giving their audience the same rich ad well thought-of content while staying safely home. Online skits showcased “Zoom Gags” (series of side-splitting scenes during employee-employer meetings), “Ranzoom”, a kidnapping sketch via Zoom; “Online Kasal” (a rib-tickling wedding done through video call); and “The New Normal” (a sketch about a family discussing the “new normal” way of living while in quarantine).  Another segment is “Mang Tasyo”, a monologue done about popular acronyms brought used or heard since the quarantine; “Inday basher”, and a “Flashback Friday”, featuring popular comedy sketches aired in the past.

The team is solid and fearless enough to do their thing in a new and different approach, yet still remain funny and the comedic value, uncompromised. Michael V, who has recovered after testing positive for the COVID-19 virus, will be part of the show’s September episodes.

Laughter that knows no lockdown

In a time where everyone hopes to grasp some kind of tangible normalcy after the Covid-19 crisis is over, we are still faced with the fact that things will not be the same again for an extended period of time.  In the meantime, a good, hearty laugh will relax us, ease our tensions, decrease our stress hormones, and eventually boost our immune system. Laughter, after all, is still the best medicine.

“If we don’t laugh, we’ll cry” is an adage that rings true, especially during this time. And the gag show has continued to give us the better option, to laugh. It has always been a reflection and microcosm of society’s complexities, adversities, frustrations, and every one’s dire need to laugh.

Indeed, with shows like the Bubble Gang, the laughter never stops. We can get by. We only need to chill and “just chew it”!