LOOK: 6-year-old girl gets surprise birthday cupcakes from delivery man while in quarantine

A delivery driver’s random act of kindness resulted in an unexpected friendship between two families in the United States.

When FedEx delivery man, later identified as Jodan Price, dropped off a package at the residence of the Paternoster family, he noticed that they were celebrating their child’s birthday, the girl’s mom Liz narrated on Twitter on May 1. 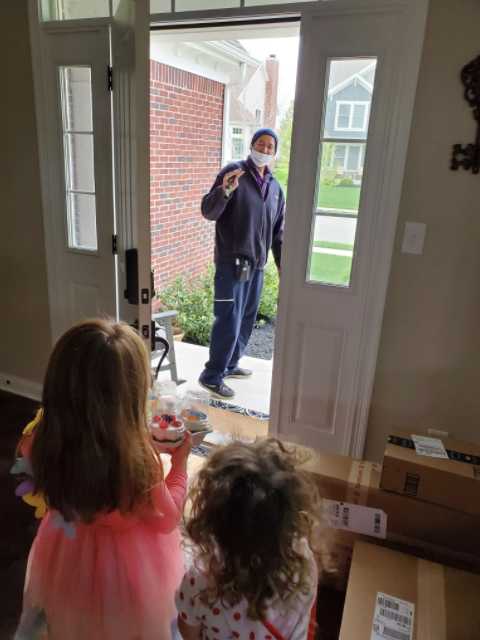 Later that day, the delivery man returned to the family’s house to deliver another special package: some ice cream cupcakes for the birthday girl, purchased by Price himself.

“[Our] driver deserves a bonus!” Paternoster said, tagging the delivery company Price is employed in.

“He said ‘I just wanted to do this because if we weren’t in this situation, she’d be celebrating with friends,'” Paternoster recalled the delivery man saying.

Ok @FedEx our driver deserves a bonus! He realized it was our daughter's birthday & went to @DairyQueen to get her ice cream cupcakes. He said "I just wanted to do this because if we weren't in this situation, she'd be celebrating with friends." I'm not crying. You're crying! 😭 pic.twitter.com/BqoMbyC3G1

The child, Emma Paternoster, celebrated her sixth birthday on April 30, as per “Good Morning America” last Wednesday, May 6.

Price, who was also a father of two sons, explained why he bought the cupcakes.

“I just thought it was so important that she have at least something for her birthday,” he was quoted as saying.

Price dropped by the ice cream shop during his lunch break to buy the sweet treats and surprised the child’s family. He told the morning show that it was his first time to do such a thing. Price also bought just enough cupcakes for Emma, her 3-year-old sister Reagan and her parents, according to the report.

After the post created by Liz went viral, Price’s son, Austin, discovered it and let his father know how much the family appreciated his gesture.

When Price once again stopped by the family’s house, the Paternosters expressed their gratefulness for the 61-year-old delivery man.

“Mr. Price stopped by and we got to thank him,” Liz said last Wednesday, May 6. “I hope you enjoy this as much as I did. Our hearts are full and we feel so blessed to have the best @FedEx delivery man in the world!”

UPDATE: Mr. Price stopped by and we got to thank him. I hope you enjoy this as much as I did. Our hearts are full and we feel so blessed to have the best @FedEx delivery man in the world! ❤️🤗❤️🙌 pic.twitter.com/JFw2s2Wfdt

Liz said that her family, as well as 80,000 people who saw her post, wanted to show their appreciation for the man. Cha Lino/JB