To coincide with the start of Asian American and Pacific Islander Heritage Month, 88rising has announced ASIA RISING FOREVER – a special live stream event taking place on Wednesday, May 6th.

The three-hour video broadcast will begin at 9 PM ET on 88rising’s YouTube and Twitter pages. Hosted by Los Angeles-based rapper and actor Dumbfoundead, the digital festival will feature exclusive interviews, surprise games, and intimate performances from the bedrooms of Asia’s most exciting artists, such as Rich Brian, NIKI, Kang Daniel, CLC, HYUKOH, and many more. An antidote to global self-isolation, the broadcast will be a celebration of Asian music and togetherness. 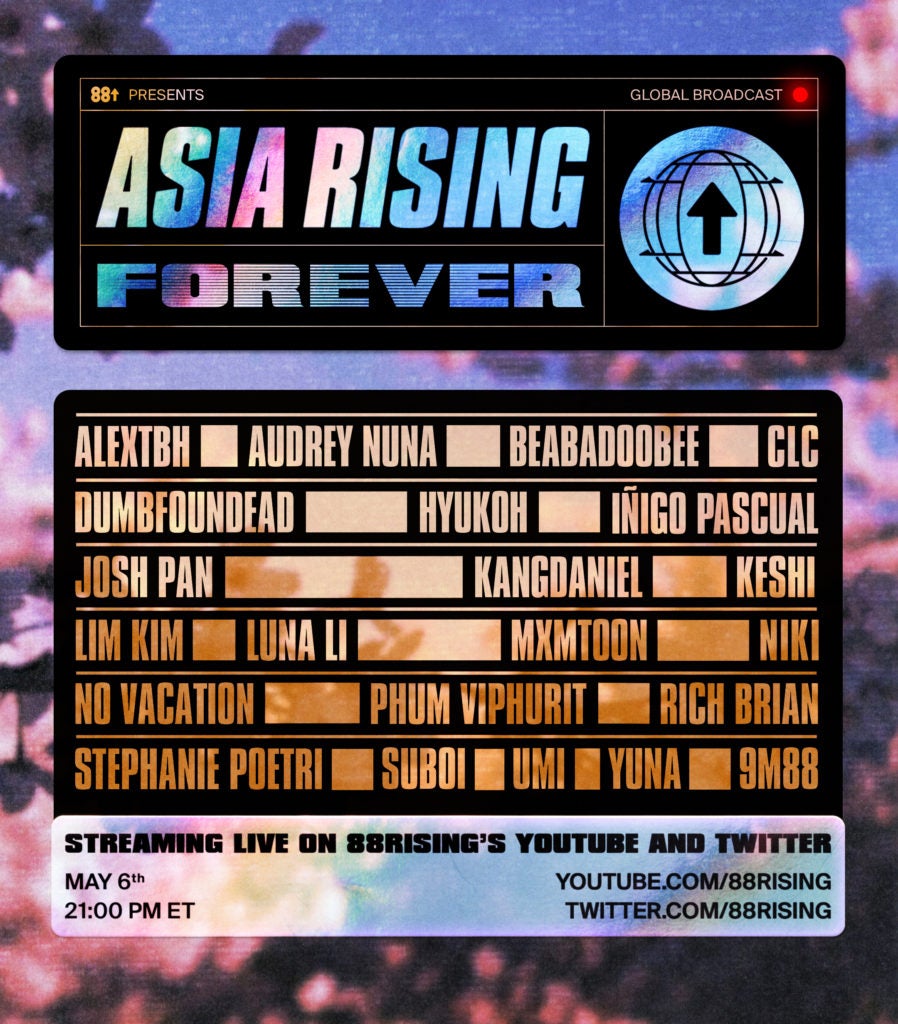 About 88rising
Revered by the likes of The New Yorker, Rolling Stone, CNN, Forbes, Bloomberg, Billboard, Pitchfork, and Los Angeles Times, 88rising is a global media company that focuses on celebrating Asian talent, stories and culture. A true pioneer in the media and entertainment industry, 88rising is trailblazing the way for never-before-seen, groundbreaking content and quickly becoming a leader in progressive music and the apex of youth culture worldwide. 88rising was the first company to launch an Asian-centric music festival in the United States (Head in the Clouds Music & Arts Festival) and the first to have an Asian R&B artist top the Billboard charts (Joji). In 2019, they were awarded Label of the Year by NetEase, one of the largest music streaming platforms in China, and had the highest streaming album in NetEase history. The team manages a strong roster of Internet-breaking sensations including Rich Brian, Joji, NIKI, Higher Brothers, Stephanie Poetri, and many more. With over 130 million followers across social media platforms, 40 million monthly Spotify listeners, 7 billion total streams and 20,000 attendees at the latest Head in the Clouds Festival in Los Angeles, 88rising’s global influence is undeniable. More information on 88rising can be found on Instagram, YouTube, Twitter and Facebook.