The biggest names in the Philippine music scene will come together for the benefit of those displaced by Taal Volcano eruption at the “Ignite PUP” concert on February 28 at the PUP Manila Athletic Oval.

The concert is organized by the Polytechnic University of the Philippines Office of the Student Regent (PUP OSR) and the Rotary Club Fort Bonifacio Global City (RFBGC).

Headlining the event are Parokya ni Edgar, the Itchyworms, Gloc-9, Rocksteddy, and Munimuni, among others.

The concert will draw over 15,000 people who are committed to supporting the mid-to-long-term rehabilitation of the communities affected. 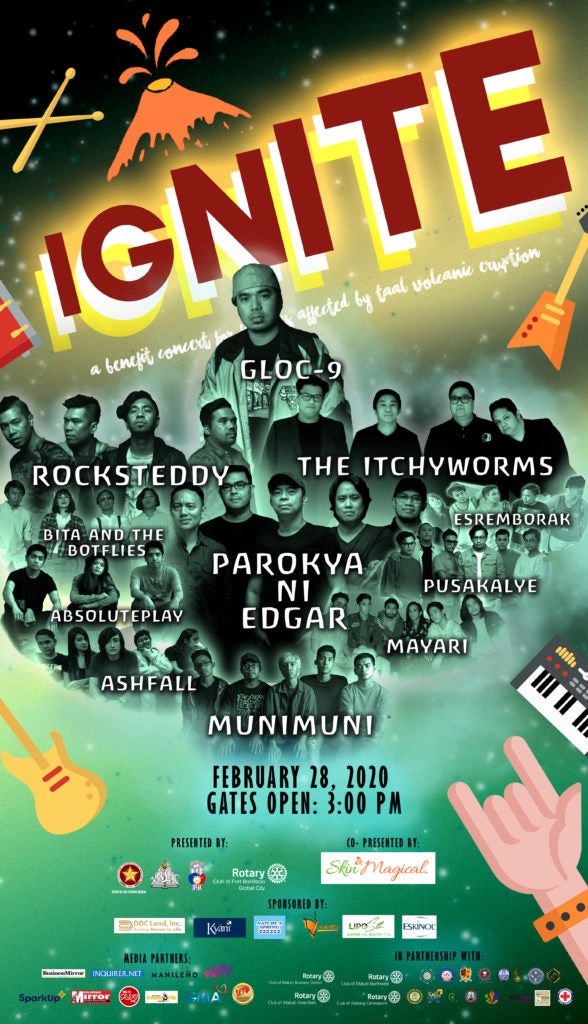 “As an Iskolar ng Bayan, being true to its commitment to shed light for the nation, the Office of the Student Regent and the PUP Community sees the plight in helping our fellow kababayans who were greatly affected by the sudden disaster. Upon the series of discussion, we have conducted together with the volunteers of the Tanglaw ng Bayan Relief Operations, it has been raised that the aftermath effects of the said eruption could last even for a decade. The volunteers are leveled off that the first wave of our relief operations is just an immediate response to the calamity and would not be able to suffice from a long-term perspective of what these families have lost during the eruption,” stated Ellenor Joyce Bartolome, the current PUP Student Regent.

The first wave of the university’s Tanglaw ng Bayan Relief Operations 2020 was conducted in the towns of Tanauan, Tuy, Balayan, and Santo Tomas in Batangas and Silang in Cavite.

“Those affected by the volcanic activity need more than just relief goods given the long-lasting impact of the event. This is especially true with residents in the permanent danger zones and those in the agricultural sector who face homelessness and disruption to their livelihood. Given this, we would need to provide these people with long term livelihood assistance to help them rebuild their lives,” added Kendrick Go, president of Rotary Club of Fort Bonifacio Global City.

Other bands performing at the event include Mayari, Esremborak, Pusakalye, Ashfall, Absolute Play, and Bita and the Botflies. The concert will also feature the battle of the greatest voices from the College of Arts and Letters (CAL).