Some warm coffee did not just energize a man to get him through the day, it also helped him rescue some feline creatures’ lives.

Kendall Diwisch has been called a local hero after he rescued three kittens abandoned in the snow in Canada. The kittens’ tails were stuck on the frozen ground so the man quickly took action by using his coffee to free the kittens.

Diwisch took the three male kittens home and fed them, according to his post on Facebook on Jan. 23. He also made sure that they found a new home. 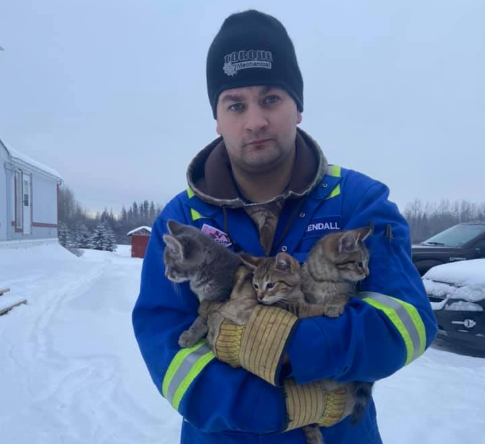 “So today I found these three fellows on one of the back roads near one of my wells,” he said. “Most likely dropped off. Poor things were frozen into the ice so they had to have been there all night.”

Diwisch also accompanied his call for adoption with a video of the kittens’ rescue. The three kittens’ tails were tangled together on the ground when Diwisch approached them. The man tried to take them away from the ice but the cats screamed in protest. Diwisch went back to his car and got his coffee tumbler, then poured its contents on the snow to melt the ice. After a couple of pulls, he was finally able to remove the kittens’ tails from the ice.

Diwisch later updated his post to announce that the three cats have all been adopted together. He also expressed his appreciation for the public’s generosity and support.

“All three are eating and drinking and very energetic,” he stated.

So today I found these three fellows on one of the back roads near one of my wells. Most likely dropped off. Poor things…

The three kittens are happy in their new home with the Trider family. A non-profit animal shelter Cause for Critters showed the three cats looking healthy on its Facebook page yesterday, Jan. 27.

For those that saw the story about the three kittens frozen to the snow, we are happy to say that they are happily in…

“Thank you to Kendall for rescuing them and to the Trider family for taking them in,” the organization stated. “We are so happy that their story will have an amazing end.” JB