Follow us:
David Hockney's "The Splash" (1966). Image: courtesy of Sotheby's via AFP Relaxnews

“The Splash” is the second in a series of three canvases initiated in 1966, in which David Hockney explores his lifelong fascination with the texture, appearance and depth of water.

The work on sale at Sotheby’s is a close sister to “A Bigger Splash”, which belongs to the collection of the Tate museum in London, United Kingdom. 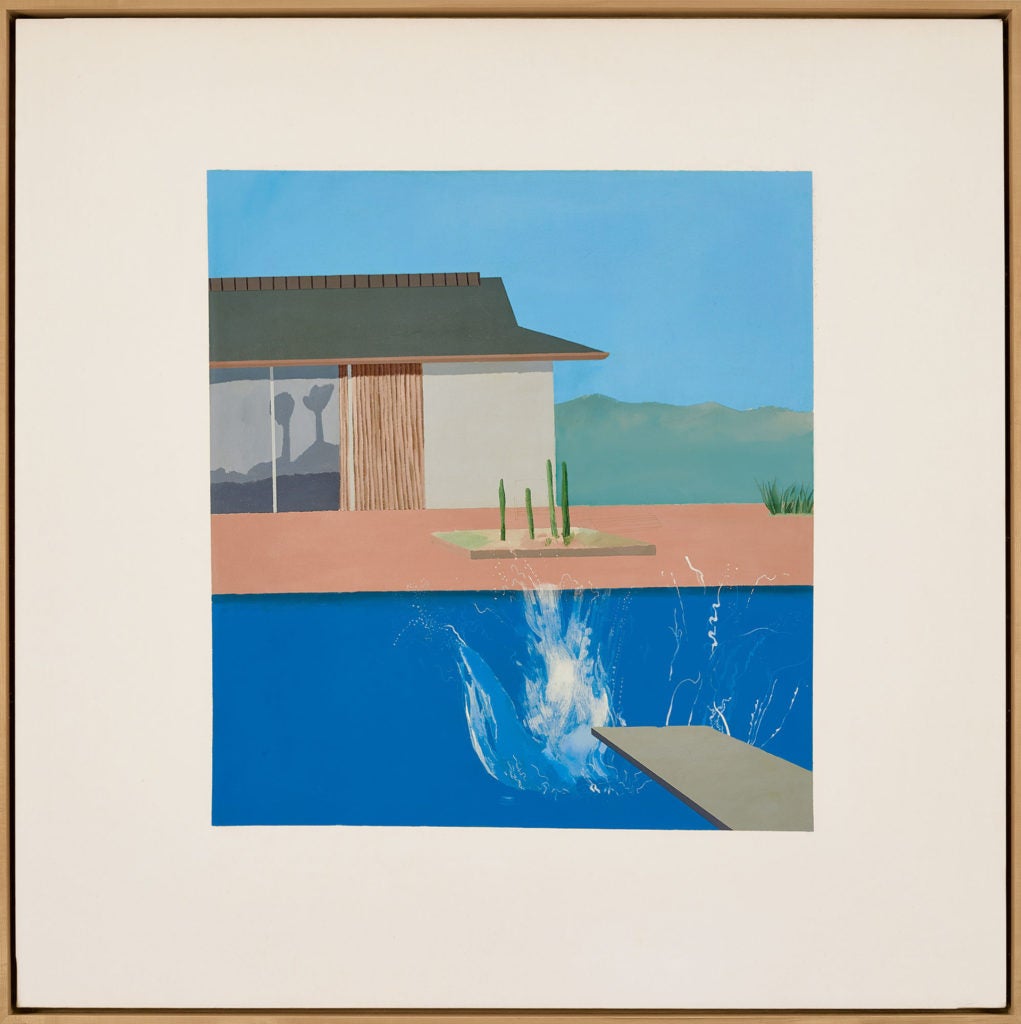 Although the two paintings slightly differ in their compositions, both were created at a watershed moment in Hockney’s career, during which the Yorkshire-born artist relocated to an apartment-studio in Los Angeles.

Between the summers of 1966 and 1967, Hockney created “The Splash” and several of his most recognizable works, such as the privately-owned “Little Splash”.

The inspiration for “The Splash” notably came from a photograph he saw in a Hollywood magazine on how to build swimming pools, immortalizing the moment just seconds after a diver has broken the surface of the turquoise water.

David Hockney’s landmark pool painting is set to make a ‘splash’ in London 💦 Painted in 1966, ‘The Splash’ is expected to sell for more than £20 million when it appears in our Contemporary Art Evening Auction on February 11. The painting captures a fleeting moment just seconds after a diver has broken the calm surface of a swimming pool. It is one of a series of three ‘splashes’, the largest of which is a jewel in the @Tate collection. The painting follows the artist’s relocation to LA just months earlier. The city was everything the Yorkshire-born artist had hoped it would be: a land of possibility, sun drenched houses, deep blue pools, palm trees and beautiful bodies, and ‘The Splash’ embodies the warmth, affluence, and pursuit of pleasure which Hockney so loved about this Californian dreamland. – #SothebysContemporary #CaliforniaDreaming #DavidHockney #losangeles

Now going under the hammer at Sotheby’s London, “The Splash” is estimated to sell for between £20 million and £30 million (around P1.3 billion and P2 billion).

This presale high estimate is far from Hockney’s current auction record of $90.3 million (over P4.5 billion), which was set in November 2018 at Christie’s New York for his famed “Portrait of an Artist (Pool with Two Figures)”.

At the time, Hockney momentarily became the most expensive living artist, before being dethroned a few months later by Jeff Koons with the $91.1 million (around P4.6 billion) sale of his “Rabbit”.

Ahead of Sotheby’s Contemporary Art evening sale on Feb. 11, “The Splash” will go on view at soon-to-be-announced dates at Sotheby’s galleries in Hong Kong, Taipei, New York and London. IB/RGA