Filipino pride and US rock band Journey’s lead singer Arnel Pineda continues to inspire legions of fans—local and international alike—that you don’t stop believin’ in the power of your dreams as you faithfully work your way to achieving them. His can-do and go-getter attitude has been one of the secrets to his success in the international music scene.

On February 16, 2020, the once budding singer will prove to the world what he is made of as he stages his comeback concert titled “Let It Love, Let It Rock.” The post-Valentine concert will be held at the New Frontier Theatre (formerly Kia Theatre) at 7pm. Arnel will rock the house down with pop star royalty Yeng Constantino. 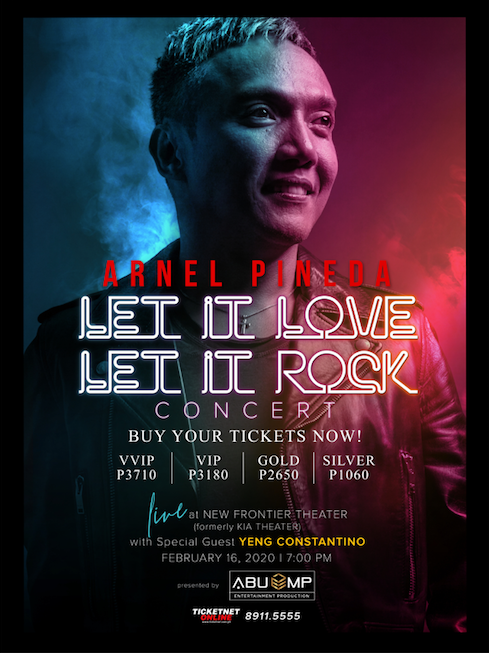 Filipino pride and Journey lead singer Arnel Pineda will rock the house down with pop rock princess Yeng Constantino during his “Let It Love, Let It Rock” concert on February 16, 2020 at the New Frontier Theatre. Tickets are available at Ticketnet

“As the concert date draws nearer and nearer, I couldn’t help but get more and more excited. It’s always a pleasure to perform in front of a Filipino audience. We’ve prepared a lot of exciting things for those who will come to see us on the 16th of February, and we hope you’ll go home after the concert with a smile on your lips and happiness in your heart,” says Arnel.

Arnel started his love affair with music at the tender age of 15, performing in different stages. After posting cover videos of bands like Led Zeppelin and Journey on YouTube, he was discovered by Journey co-founder Neal Schon and was offered to be the new vocalist of the band in 2007. He’s since toured with Journey, performing in jam-packed arenas who joyfully join them in singing classic ballads like Open Arms, Faithfully, and Don’t Stop Believin’. Arnel also recently performed with Journey at a Las Vegas residency at the Colosseum at Caesars Palace.

“I’m excited to spend that one night with my Filipino fans, and I promise to give it my all—just like how I always do it when I perform. I hope you join me as I continue with my own journey, singing songs that are close to my heart,” he says.

Tickets for the “Let It Love, Let It Rock” concert are available at Ticketnet.