A monkey that confesses he steals women’s identity cards, causing them to temporarily forget who they are, starred Tuesday as author Haruki Murakami marked 40 years since his debut as a novelist with his first public reading in Japan in nearly a quarter century.

Now 70 and one of the world’s most popular and acclaimed novelists, Murakami debuted with “Hear the Wind Sing” in 1979, four years after he began writing while running a jazz bar in Tokyo. His 1987 romantic novel “Norwegian Wood” was his first bestseller, establishing him as a young literary star. His latest novel, “Killing Commendatore”, hit United States bookstores last year.

Media-shy Murakami’s last public readings were in Kobe and Ashiya in western Japan, where he grew up, following a deadly 1995 earthquake there. On Tuesday, he was joined by award-winning young female novelist Mieko Kawakami, a longtime Murakami fan who was in the audience at both events 24 years ago before she became a novelist. 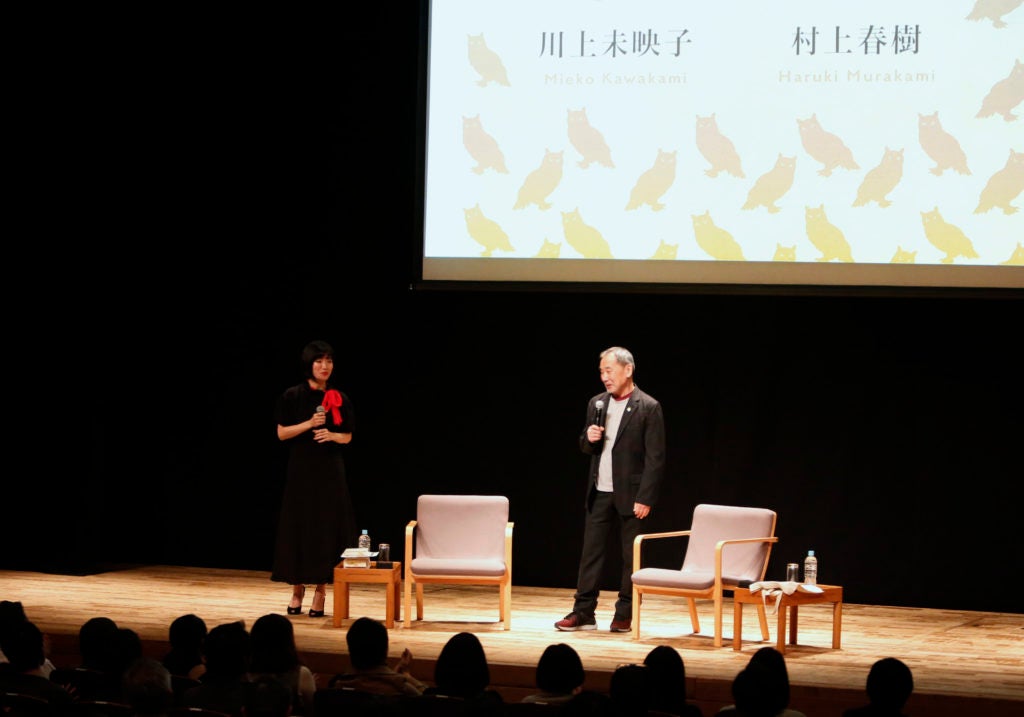 After the two authors took turns reading passages from their works, Murakami said, “Actually, I have a brand new novel that I wrote a few weeks ago, and I haven’t even published it.” He said it is called “Confessions of a Shinagawa Monkey” and is a sequel to “A Shinagawa Monkey”, a story of a woman named Mizuki who forgets her name because a monkey had stolen it, published as part of a 2002 compilation, “Five Strange Tales from Tokyo”.

The new story takes place at a small Japanese hot spring hotel where a monkey appears as the protagonist takes a bath. The monkey, apparently speaking in Japanese, offers to wash his back, and explains he was raised by a professor and grew up listening to classical music such as Joseph Bruckner and Richard Strauss. The monkey faced discrimination in the conformist monkey community and ended up at the hot springs hotel where he is hired as a helper and given an attic to live in.

After the protagonist invites the monkey to his room for a chat over beer, the monkey says he is called Shinagawa Monkey and reveals he has a bad habit of stealing part of the names of women he falls in love with by taking their driver’s licenses and other identification cards, causing them to forget their names.

Murakami said “Confessions of a Shinagawa Monkey” takes about 50 minutes to read, so he read a 30-minute abridged version for the event. Murakami comically acted out conversations between the monkey and the protagonist, setting off laughter from the floor. He said the story may be published in the near future.

Without any video cameras present, Murakami appeared relaxed as he and Kawakami took turns reading their works. Kawakami won the prestigious Akutagawa Prize in 2008 for “Breasts and Eggs” and has penned other award-winning novels including “Dreams of Love, etc”, “Yearning” and “Heaven”.

The two authors have published a new book, “A Horned Owl Takes Off at Dawn: A long long interview by Kawakami Mieko”, a collection of her interviews of Murakami. RGA

Author Murakami: Joy of writing is to start not knowing end