A certain baby from the United Kingdom has taken the internet by storm, and for one of the best reasons: the moment her hearing aids were turned on was captured on video by her parents.

Paul Addison’s short video of his adorable baby Georgina shows one of the purest moments of joy someone can experience, and the internet has been blessed with it through Twitter since last Thursday, Dec. 5. 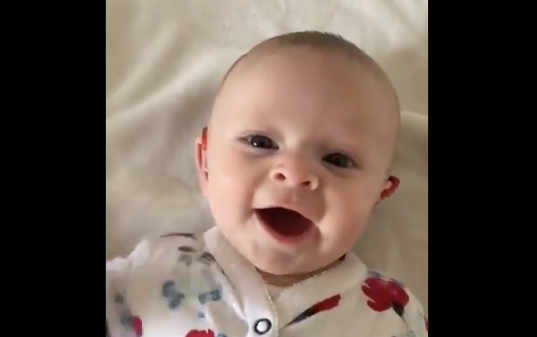 The video starts with a silent Georgina, or Gigi, as her parents like to call her. Then, her mother Louise asked: “Okay, so we’ve just turned your hearing on, shall we say hello to everybody? Shall we say hello?”

Right after hearing her mother’s voice, Gigi lets out a loud, happy squeal, and she does so while wearing a smile and happily waving her arms around.

Paul thanked the internet for their warm response to his emotional clip of his daughter, which has garnered at least 6,800 retweets and around 51,000 likes, as of writing.

“What a lovely response from so many people – shout out to @HarrogateNHSFT for their continued hard work,” he said. Harrogate and District NHS Foundation Trust provides health services in the North Yorkshire, Leeds and North East areas.

“An amazing global reaction to baby Gigi – thank you all again. We promise to keep you posted as she grows,” the father added through another tweet last Sunday, Dec. 7.

An amazing global reaction to baby Gigi – thank you all again. We promise to keep you posted as she grows 😊 pic.twitter.com/od36UKQDc7

Gigi was born with severe sensorineural hearing loss and has been using hearing aids since she was six weeks old, her mother revealed in an interview at BBC Breakfast yesterday.

Every morning, the parents are treated with Gigi’s sweet reaction to having her hearing aids turned on.

“When you put them on, it’s just brilliant. Every morning, when we put them in after she’s obviously had them out at night, we get an amazing reaction,” she said.

She said the video posted by her husband “was just one of the mornings” when they put Gigi’s hearing aids in.

The mother added, “[We] get this reaction where all of a sudden it turns on and she thinks, ‘Oh, I can hear myself!'” JB

Firefighter delivers wife’s baby girl on side of highway