As extreme air pollution in India continues, temple devotees in Varanasi, one of India’s oldest cities and home to numerous sacred temples, took matters into their own hands to protect their deities from the toxic air.

Harish Mishra, a priest in the Shiv-Parvati temple, along with the devotees, have been covering the faces of the gods Shiva and Durga with anti-pollution masks, as per Indo-Asian News Service via India Today yesterday, Nov. 6. 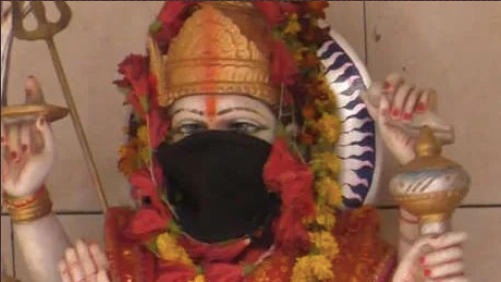 The fine particulate matter in Varanasi reached 500 this week, as per report.

“Varanasi is a place of belief. We treat our idols as living deities and take pains to make them happy and comfortable,” Mishra told the news agency.

One Priya Jain took some snapshots of the deities and posted these on Twitter last Tuesday, Nov. 5.

The priest narrated that in the summer, they coat the idols with sandalwood paste to keep them cool, and cover them with woollens in the winter. Thus they find it appropriate to also protect their gods from the pollution.

One goddess was harder to cover with a mask than the others.

Kali was “an angry goddess,” Mishra claimed. “[I]t is believed that her popped out tongue should not be covered. So we decided not to cover her face.”

Ultimately, the gods influenced the community in a good way. The priest said that devotees visiting the temple have followed suit upon seeing the gods wear the anti-pollution masks. JB