Last October 8, fans of the  “Insatiable” series were in for a treat as its lead characters, Patty and Bob, played by Debby Ryan and Dallas Roberts respectively, were in Manila for a special fan meeting event.

The Netflix celebration was held in Shangri-La at the Fort and it featured a plethora of fun activities for guests to enjoy. This included a  preview of season 2, an unforgettable drag performance of the Miss Magic Jesus theme song, and a mini pageant show among fans, which was judged by Debby Ryan, Dallas Roberts, and the first-ever Miss Universe Philippines titleholder Gloria Diaz.

Here are the video highlights from the event:

In addition to the fan meeting, Ryan, Roberts, and Diaz also got up close and personal with members of the media to discuss their characters, Asian representation in Hollywood media, their fans’ response to the show, their personal views on beauty pageants, and their message for those who struggle with issues concerning image and confidence. 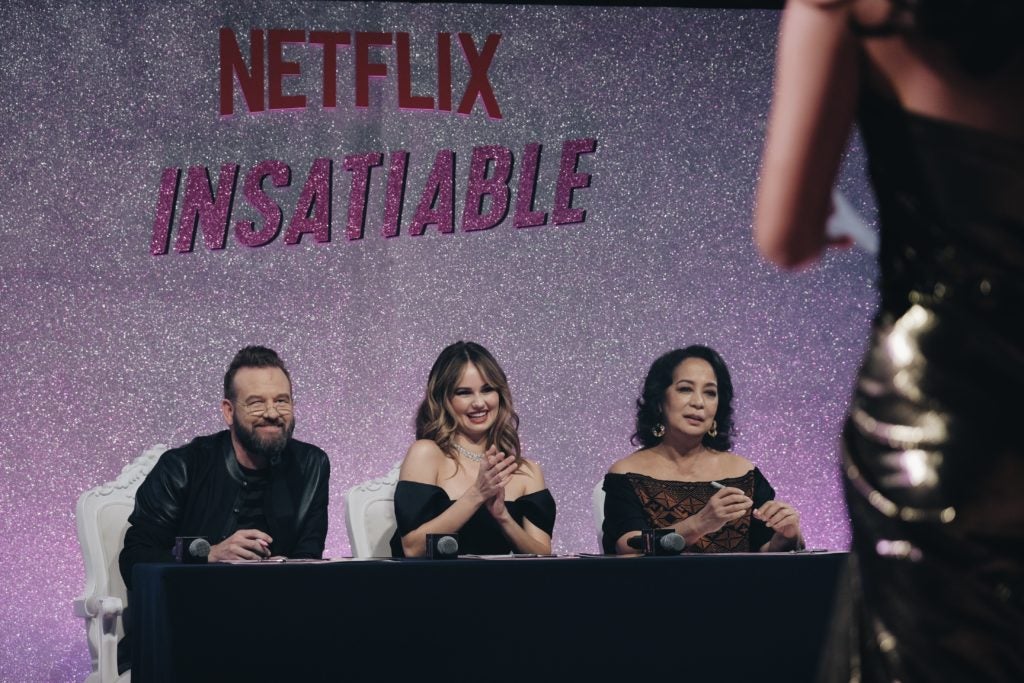 Here’s what we learned from the three actors:

As season 2 premiered last October 11, a number of Netflix viewers were able to see a significant change from the characters of season one, particularly with Debby Ryan’s Patty and Dallas Roberts’ Bob. And one aspect many viewers have thoroughly enjoyed from both seasons is the quirky (and sometimes destructive) dynamic between Bob Armstrong and Patty Bladell.

Describing them with a Katharine Hepburn/Spencer Tracy–like relationship, Dallas Roberts tells the press how much he admires their characters’ unique friendship.

“It’s like a classic love story–they’re just not in love with each other in that way. It’s poisonous, it’s treasonous, and it’s broken. It’s psychotic, but it’s a beautiful love story if you look past all that [craziness their characters have been through]. It really is like they need each other–like they orbit around each other–and they have found the person that they needed. And I find that very powerful,” he explained.

Likewise, his co-star Ryan agreed and even went so far as to call the pair “soulmates” in a non-romantic way.

“He’s (Bob Armstrong) the first person that makes her feel sane, valuable, and beautiful. So, she gets confused ‘cause he’s a man and she’s a straight girl so she thinks she’s in love with him. Then, she learns soulmates isn’t always romantic, right?” Ryan shares. “And Bob is the person that rescues her and has her back–she doesn’t have that [in her life]. She doesn’t have stability. If Patty is a kite, then Bob is her string.”

However, Patty and Bob’s unique arrangement changes in the second season and viewers get a better glimpse into their sweet yet complicated relationship.

Coming into a Hollywood production that focuses on beauty pageants, Gloria Diaz brought her signature charisma and her prior knowledge of the competition to her portrayal of Gloria Reyes.

When asked what it was like to be a guest on the show, she said, “Every minute of the time, I saw the difference, I saw how the Philippines is on its way and in terms of acting, technical–it’s all a matter of money–we’re about 8 years behind, [which is] not far. We’re doing very well with what we have. We’re very flexible and if we had more money, we’d have better cameras.”

On top of that, Diaz is very happy to be representing Filipinos on an international platform. Though, she wishes more representation will be done in Hollywood media.

More sensitive issues are tackled in the second season

When the trailer for season one first debuted, it was met with a number of negative reactions from critics and online users. Many even went so far as to describe the show as one that was “offensive” and “fat-shaming”. Although once the show premiered on Netflix and more people got to see the story behind it, many viewers were pleasantly surprised to see how the series positively shed light on the topic of beauty and self-esteem.

“As people watched the show–the first season– and they saw the storyline, there was so much beautiful positivity we were met with. So, receiving such a great amount of positivity to the first season was such an encouragement and going into the second season and understanding that there was so much conversation around it,  we did have a responsibility to touch on these subjects, really intentionally,” Ryan said.

Ryan added that it’s because of the masterclass storytelling provided by the show’s writers and cast that allows people to resonate with Insatiable.

“Without outing our own damages, our personal relationships with ourselves and with some of these issues, every single person has a voice in this show and has experienced the things we’re talking about, one or the other. And so, knowing that we’re making a show for us–for people like us–who’ve been through this and have found ourselves in places that aren’t great and maybe aren’t healthy because of these things we’ve dealt with, we see through season 2 that even more people understand what we’re doing. We’re making a show for people like us who’ve been through the gritty and the messy and the weird.”

Dallas Roberts also chimed in on the way the show effortlessly tackled these sensitive topics in an intriguing plotline. He said, “I love that the show is surprising, colorful, and wild–it’s almost not real. But in the middle of it, it’s very very real issues. And being able to talk about them in a way that isn’t sort of ‘sitting around the table and discussing it’– it’s just something fun at times, horrifying at times, and turning it into drama is the best way to talk about issues.”

Beauty pageants are more than just the glitz and glamour

Being the first-ever Miss Universe Philippines titleholder, Gloria Diaz had a few things to say about the evolution of beauty pageants from then to now.

“There’s a big difference now [since then]. Fifty years ago, naka-focus ‘yan sa college degrees, focus on sports. You weren’t allowed to do an ad or pose for cigarettes or casinos or birth control and stuff like that. But it slowly changed to now, which is more down-to-earth, like they talk about birth control, dating married men, [and] divorce. Times have changed. In fact, we’re even having heterosexuals and homosexuals [compete together] in Miss Universe–they allow that now. Things have changed. I guess the competition is tougher now. Because before, what you see is what you get–what you were born with. But now, you can do anything,” Diaz described.

Roberts and Ryan also shared their two cents about beauty pageant culture and how the competition has become a source of empowerment for many young women.

“I really see past the sort of shiny hair and the vaseline teeth and sort of aspects of it. And I see that it really does create empowerment in young ladies and there’s nothing wrong with that,” Roberts noted.

Ryan also added, “I’ve really gotten to love, adore, and support the system and see in this world of feminism and women empowerment–and see the good that they’re doing. I think if someone sat down with some of the women who have gone through the beauty pageant system and heard what it’s done for the self-esteem, their platform, their family, their career, their future, their entrepreneurship, they would not think it was bad for them. The world is the way it is, in terms of what it expects of us, if you get to go up there and it’s about what you look like as much as it is what you care about and what you’re fighting for and what your passionate about, how is that bad?”

A message of hope for those struggling with their self-image

As many fans of the show know, Patty has been struggling with understanding her self-worth and image. In line with this, Debby Ryan has a special message for everyone who’s struggling with this.

“No one can tell you anything about yourself that is true unless you believe it. They can say it a thousand times and it can look like everyone’s saying it, but until you actually believe it, it’s not true. So, don’t give them power. You can smile, you can laugh,  you can nod, you can say ‘Oh, I know I have a big forehead’ and I’m the first person who says it so you don’t get to take that power from me, I gave it. And it actually lets a little bit of the light in.”

Season two of Insatiable is now streaming on Netflix.