ARTE SUAVE MANILA is once again rolling out the mats for the Philippine jiu-jitsu community! Slated on October 19-20, 2019 in Commercenter Alabang, the competition and expo will bring together fighters, coaches, and martial arts enthusiasts from all over the country for two days of exciting jiu-jitsu.

“After four amazing events, which of course is due to support we received from the local jiu-jitsu and MMA communities, we’re excited to once again have Arte Suave Manila at Commercenter,” shares Leslie Tagle-Dinglasan, AVP for Marketing of Commercenter Alabang. “We’re proud to be the home and presenter of an event that contributes to the growth of the martial art and sport in the Philippines.”

Now on its fifth instalment, Arte Suave Manila enters its milestone year with over 280 registered competitors — a huge leap from its previous high record of 205 participants.

The event also has two new additions to the its activity line-up, first of which is the Arte Suave Grand Prix. Unlike the single-elimination format of the regular competition, the six light to middleweight Purple Belt jiu-jiteiros invited to compete must work their way up from the preliminaries (round robin) to the eliminations (quarters and semis) to secure a spot in the finals.

Arte Suave Manila is also opening this year’s event to to next-generation jiu-jiteiros with juvenile matches. Happening on the second day, the mixed-gender gi competitions will be four age divisions: 6 to 8, 9 to 11, 12 to 14, and 15 to 17.

“Local jiu-jitsu just keeps getting better and better every year, and Arte Suave Grand Prix is our way to let the athletes battle-test their technique along with their physical and mental condition,” quips Franco Rulloda, President of event producer Triumvirate Fighting and himself a Brazilian Jiu-jitsu Black Belt.

The highly-popular Arte Suave Superfights, the 10-minute submissions-only exhibition matches, will be retained for no-gi and will happen on the second day of the event.

Jiu-jitsu and MMA apparel and gear brands will headline the expo, with a mix of mainstays and new players. Arte Suave Manila will also open the exhibit to lifestyle brands that want to bring their products or services to the martial arts demographic.

“In local jiu-jitsu, fighters usually end up becoming friends with the people they face off with in competitions,” begins Rulloda. “Iron sharpens iron, so at the end of the day, you inevitably helped each other get better in that five or six minutes of grappling.”

A number of fighters who joined Arte Suave Manila’s previous competitions and super fights have been dominating the international jiu-jitsu circuit, with some even making the cut to qualify for the Philippine National Jiu-Jitsu Team.

“The only way for Filipino jiu-jiteiros to continue to rise on the world stage is by helping one another right at home,” he quips. “We are all united by the gentle art.” 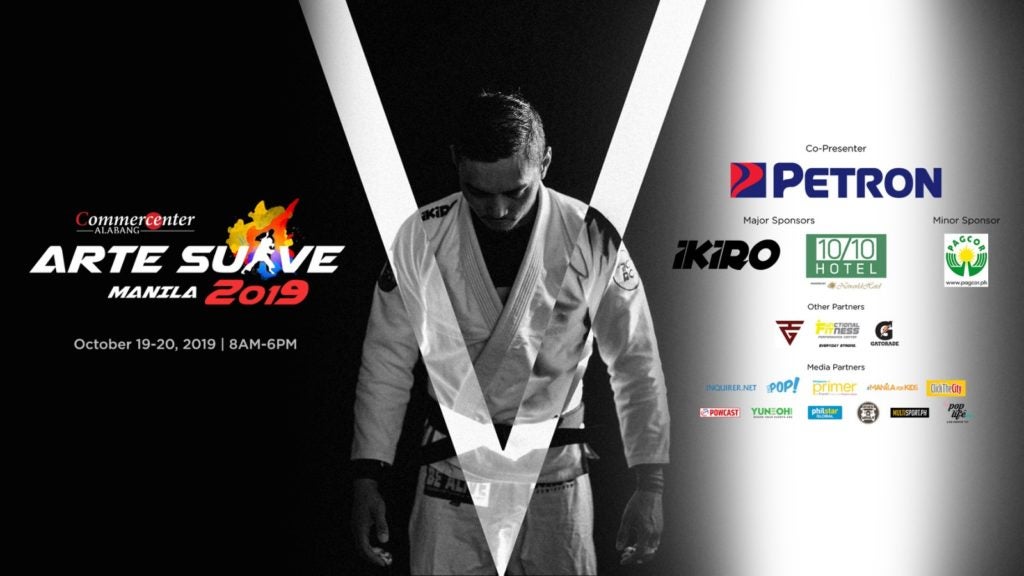