The 32nd Annual UP Pi Sigma Fraternity Open Debate Tournament will be held this September and October in UP Diliman. The longest-running open debate tournament in Asia is back and will be held on September 27 for the elimination rounds, October 3 for the semifinal rounds, and October 11 for the final round.

Founded in 1972 at UP Diliman, the UP Pi Sigma Fraternity is armed with its twin principles, Paglingkuran ang Sambayanan and Paragon of Scholarship. Since its inception, it has conducted various projects that are anchored around these ideals. The Annual UP Open Debate Tournament is an embodiment of the its twin principles and it is the fraternity’s flagship event held annually in UP Diliman and attended by students, politicians and professionals of various backgrounds.

Established in 1988 by Sigmans and current UP College of Law Professors Atty. Crisostomo Uribe and Atty. Dan Calica, the tournament seeks to promote social awareness and critical thinking regarding pressing national issues. The progenitors of the tournament utilized the academic activity of debate, as it ensures that an issue is seen in different perspectives, in order to avoid bias. This aids the audience in discerning and formulating their own opinions based on facts and arguments presented by both sides.

The tournament’s 32nd installment shall tackle topics such as loan agreements with foreign countries, the GCTA law, territorial waters of the Philippines, and the national across the board wage. The most controversial issues in the country including the repealing of the rice tariffication act and the lowering of the minimum age of criminal responsibility will also be debated. Matches shall follow the Modified Oregon-Oxford format and 8 teams from prestigious universities within Metro Manila are set to compete. The champion shall be awarded a cash prize of 30,000 Php while the runner-up shall be awarded 10,000 Php.

The 32nd year of the Open Debate Tournament’s run is a testament to the fraternity’s commitment in informing the masses and shaping the minds of the Filipino people, in line with its struggle towards a just and humane society. 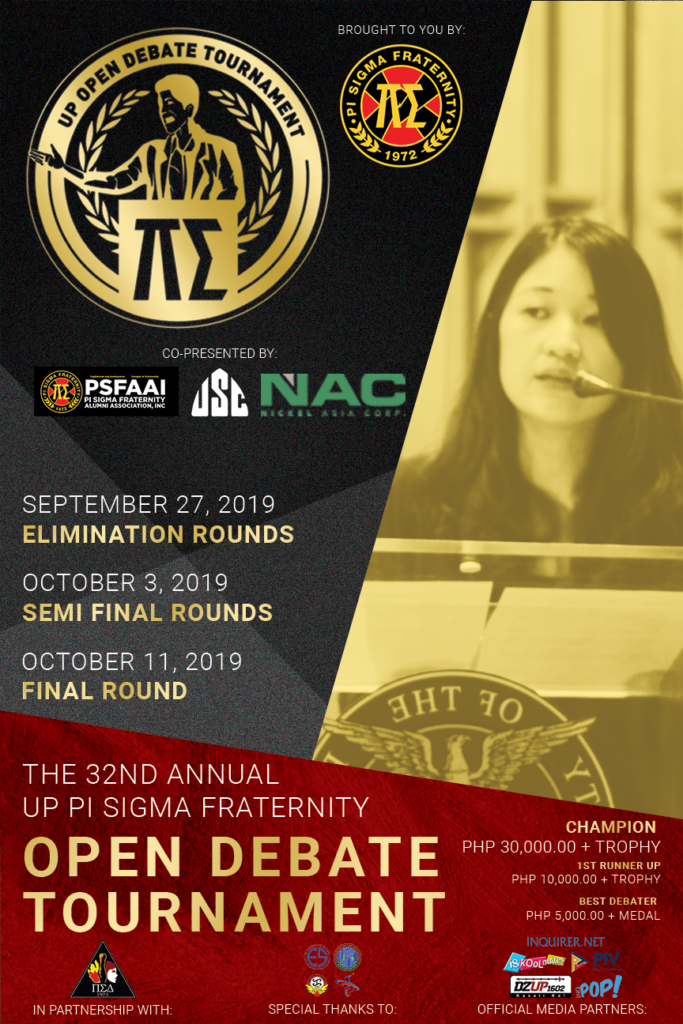