Follow us:
A 17-ton truck customized by Banksy will go under the hammer on Sept. 14 at Bonhams. Image: courtesy of Bonhams via AFP Relaxnews

A 17-ton truck, covered in graffiti by British street artist Banksy, will be offered this September as part of Bonhams’s “Goodwood Revival” car auction.

The vehicle, entitled “Turbo Zone Truck (Laugh Now But One Day We’ll Be in Charge)”, is an early artwork by Banksy dating back to 2000.

At the time, the anonymous graffiti artist was still very much under the art world’s radar, with his fame soaring after his breakthrough solo exhibition, “Barely Legal” in 2006. 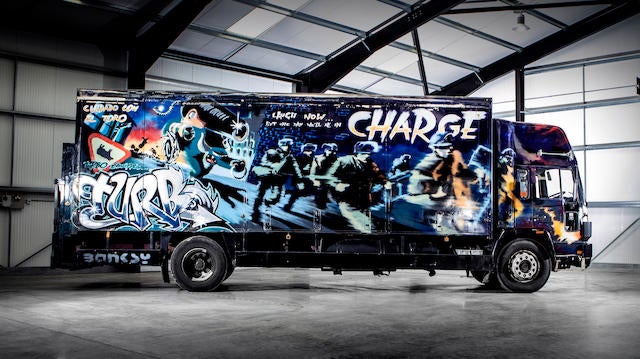 A 17-ton truck customized by Banksy will go under the hammer on Sept. 14 at Bonhams. Image: courtesy of Bonhams via AFP Relaxnews

The truck, which is painted in its entirety by Banksy, is estimated to fetch between £1 million and £1.5 million (around $1.3 million and $2 million).

While at a New Year’s party in Spain, Banksy was presented with the Volvo FL6 by Mojo, the co-founder of Turbozone International Circus. He started working on the truck during the party and continued to cover it with graffiti for the following two weeks.

The vehicle features several motifs that would later become Banksy’s trademarks, including flying monkeys and the sentence, “Laugh now but one day we’ll be in charge.”

It also depicts a silhouette of a male figure with a Mohican haircut smashing a TV with a hammer. On the reverse side of the truck, a group of soldiers is seen running away from a cannon with the word “charge” written over their heads.

“The composition bears all the hallmarks of this peerless agent provocateur. Bonhams is thrilled to have the opportunity to continue offering the best of his work at auction as we have done consistently for well over a decade,” Ralph Taylor, who is Bonhams’ global head of post-war and contemporary art, said in a statement. 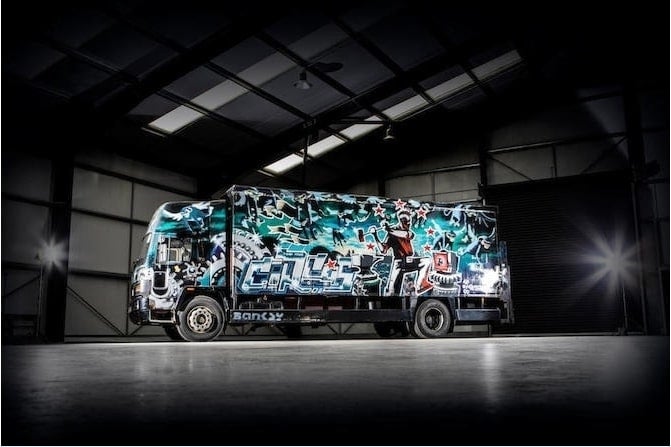 A 17-ton truck customized by Banksy will go under the hammer on Sept. 14 at Bonhams. Image: courtesy of Bonhams via AFP Relaxnews

Banksy’s “Turbo Zone Truck (Laugh Now But One Day We’ll Be in Charge” will hit the auction block on September 14 on the Goodwood estate in West Sussex. The work will be accompanied by a certificate of authenticity from Banksy’s handling office Pest Control.

This month, the street artist will also be honored in two online sales held simultaneously by Sotheby’s and Christie’s.

On Sept. 6, Sotheby’s will open its “Banksy/Online” two-week auction, which will feature a number of Banksy’s most sought-after prints. Among them are a presumably un-shredded edition of “Girl with Balloon” and “Welcome to Hell”.

Meanwhile, Christie’s will launch its own auction, cheekily entitled “Banksy: I can’t believe you Morons actually buy this sh*t,” on Sept. 11. Highlights of the sale include a signed version of “Choose Your Weapon” and “Stop and Search”. JB