WATCH: Man gets flight all to himself, videos experience

A man’s rescheduled flight turned out to be a blessing in disguise as he ended up being the only passenger on his trip and feeling like riding on his own private jet.

Vincent Peone’s scheduled flight to his home in New York was delayed last week, as per The Washington Post yesterday, Aug. 13. 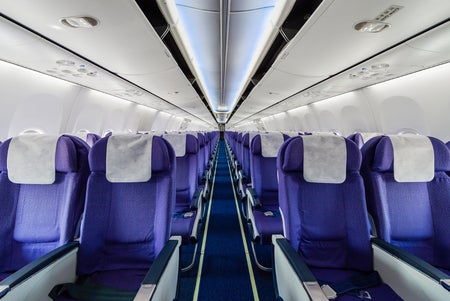 When he arrived at the gate for his rescheduled flight, the airport staff informed him he was the only passenger on the trip.

Peone did not miss the opportunity to document the rare occasion of having the plane all to himself. He posted the video on Twitter yesterday.

Last week @Delta gave me my own private jet…kind of. pic.twitter.com/p14OGLw1jv

“Will the only passenger on this flight kindly board at this time,” an employee announced at the gate, as seen in his video.

Peone was then escorted to the plane. He asked a worker if she had ever seen a passenger flying alone. “Yes, I have,” she replied.

As Peone boarded the aircraft, he showed workers loading sandbags into the plane.

“We’re just adding weight to the plane because there are no people,” Peone said.

Peone also had the chance to enter the plane’s cockpit and thank the pilots. One pilot joked and said: “It’s like your private jet.”

Despite there being no other passengers, the stewardess continued to follow protocol and address the plane through its intercom.

He then turned the camera to show the rows of empty seats on the plane. As the video ended, he humorously shared a moment of himself posing by the plane’s entrance with a drink in hand.

Delta, the airline that flew Peone to his destination, took notice of his video on Twitter and replied: “Hi Vincent! That looks like an awesome experience!”

Hi Vincent! That looks like an awesome experience! Thank you for the shoutout, and we truly appreciate you for choosing Delta! Take care. ✈️😊 AJM

A Chinese farmer couldn’t fly a plane, so he built one