Follow us:
For the first time this year, the festival has opened a special day care center to lend a hand to parents in the film industry. Image: AFP/Loic Venance 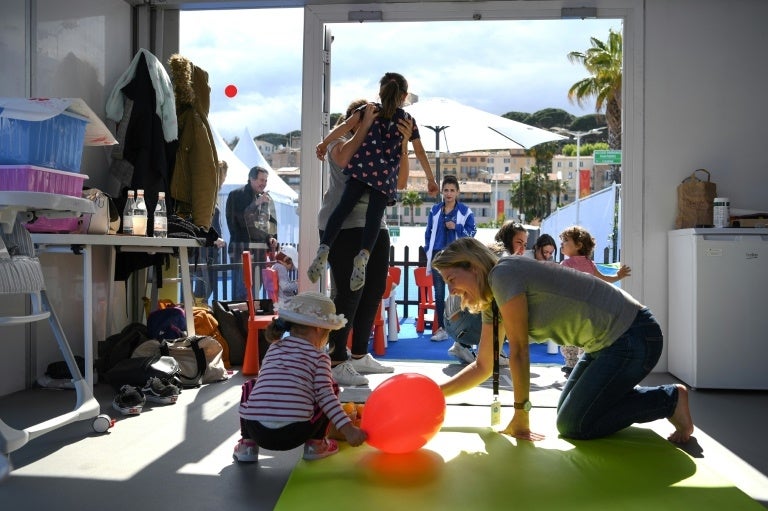 For the first time this year, the festival has opened a special day care center to lend a hand to parents in the film industry.  Image: AFP/Loic Venance

In a sunny corner overlooking the yacht-filled harbor, a handful of Cannes’ youngest visitors are bouncing around a vibrant-colored carpet in the first-ever creche at the world’s biggest film festival.

The brainchild of three film industry mothers struggling to juggle being a parent with the grueling annual run of festivals, Le Ballon Rouge (The Red Balloon) is a light, airy room “where children are the new VIPs.”

Kids had previously been a very rare sight at the annual celebrity-filled festival, which thrives on glitz and glamour but has done little to meet the practical needs of movers and shakers with babies or toddlers in tow.

But for the first time this year, the festival has opened the special day care center to lend a hand to parents in the film industry. 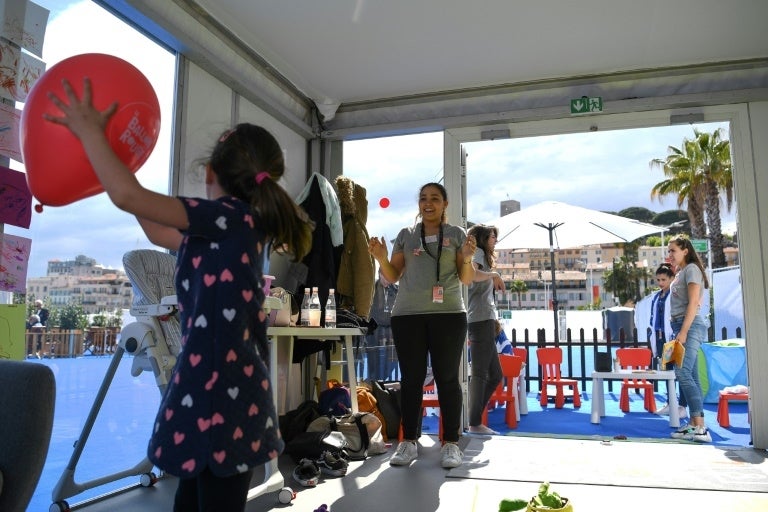 Three film industry professionals with young children came up with the idea for a creche a few months ago while sharing tips about how to handle the work-life balance.  Image: AFP/Loic Venance

It follows a similar nursery, “playhouse and nap room,” set up at the Sundance film festival last year by the US-based Moms in Film group, which had railed at the lack of child-friendly facilities at Cannes.

It takes women to get together

It’s the morning of the opening of the Cannes creche and a handful of youngsters are playing with soft toys, while others try to nap in a space that also has fenced-off outdoor areas shaded by parasols.

Three young nannies and a nurse from the Paris-based service “Nanny Please” are on hand to sing, color, draw and make lunch, helped by two local volunteers, with the children housed in a pavilion by the harbor.

Coming from Los Angeles for her first visit to the Cannes festival, Gail Greaves said she had been planning on hiring someone to watch her 2-year-old daughter, Arabella.

But with the festival running for 12 days, going private can quickly get expensive.

But searching online, she found Le Ballon Rouge and quickly booked a place. Accredited festival goers can obtain special passes for their children to use the day care service which is open from 10 a.m. to 6 p.m. and costs 50 euros per day.

“This is amazing! They have all of this, and other kids to play with,” Greaves smiled. “It takes women coming together to make something happen.”

Three film industry professionals with young children came up with the idea a few months ago while sharing tips about how to handle the work-life balance. Together they founded “Parenting at Film Festivals.”

“We were just comparing notes on how hard it was to be a parent at a festival,” said Michelle Carey, an Australian film programmer and one of the three women who founded the group.

During last year’s festival, she had to dash back to her hotel room some 20 minutes away just to feed her infant son, which was both difficult and impractical. And she wasn’t alone.

“In January, we started talking with other friends in the industry, just sharing tips, then at the Berlin film festival we met several festival representatives,” she told AFP as her 2-year-old son raced around the room giggling.

Coming up with a plan, the three approached the festival organizers and Cannes’ sprawling film market and by April, the initiative was in place.

They have also set up a baby room inside the Palais des Festivals, where the red carpet premieres take place, offering a private space for mums to feed and change their babies.

“It’s particularly good for young mothers who may be returning to work after giving birth,” Carey said.

“So far, 50 parents have signed up, with 17 children booked in,” Carey shared. One of the parents is a member of one of the festival prize juries.

The infrastructure was funded by the film market, while the child care costs were raised through a crowdfunding initiative with contributions from more than 12 companies and institutions.

Supported by the 5050/2020 collective, which is pushing for an equal place for women in the film industry, the move comes a year after Cannes signed up to a gender equality pledge.

But Carey said the initiative to offer parent-friendly services was entirely led by her and her fellow mothers.

“We went to them and offered a solution,” she stated.

“If we hadn’t gone to them, they wouldn’t have been able to do it themselves.” HM /ra

Learn, play, and grow as a family at the largest educational kids’ fair in the Philippines

‘Hallmark for L.I.F.E’ gives children another chance at life