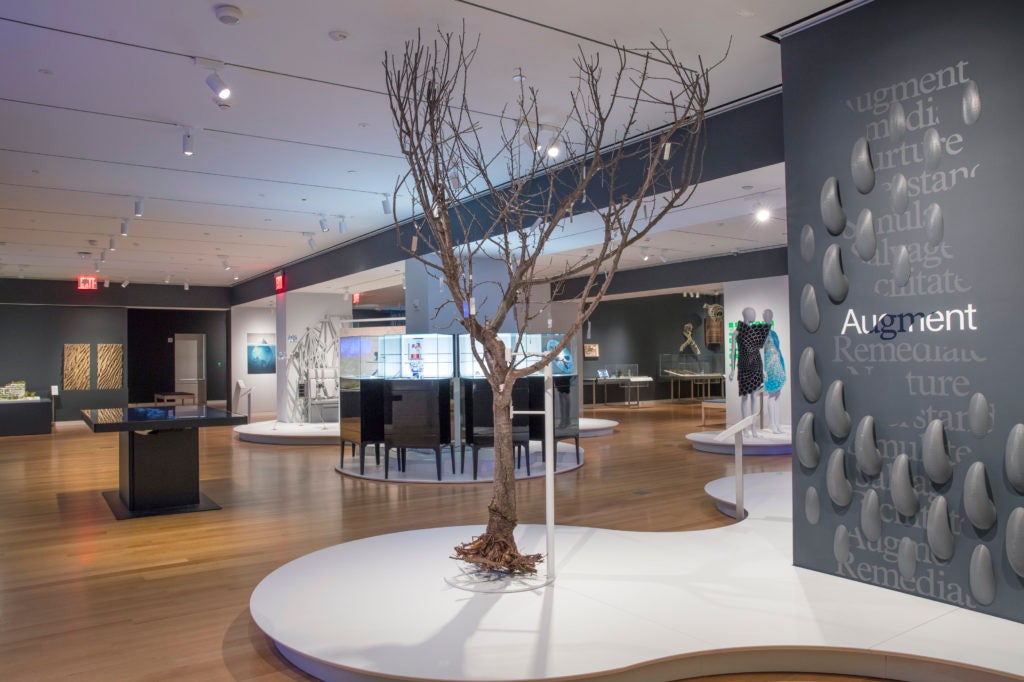 The Cooper Hewitt Smithsonian Design Museum in New York and the Cube design Museum in Kerkrade, Netherlands, have joined forces in “Nature”, a blockbuster show devoted to cutting-edge designs both inspired by nature and entwined in nature, with a focus on sustainability.

The show is sobering, at times humorous, sometimes heartbreaking (an extinct rhino that is made to come to life digitally, then vanishes in an instant), and decidedly uplifting when taken in as a whole.

“We searched labs and design studios around the world looking for innovative designs,” said Andrea Lipps, one of the curators at Cooper Hewitt who helped organize the show for the museum’s triennial.

And they found them. “There are a lot of people, from all different disciplines, joining together and working very, very hard to find creative solutions to the enormous challenges we face.” 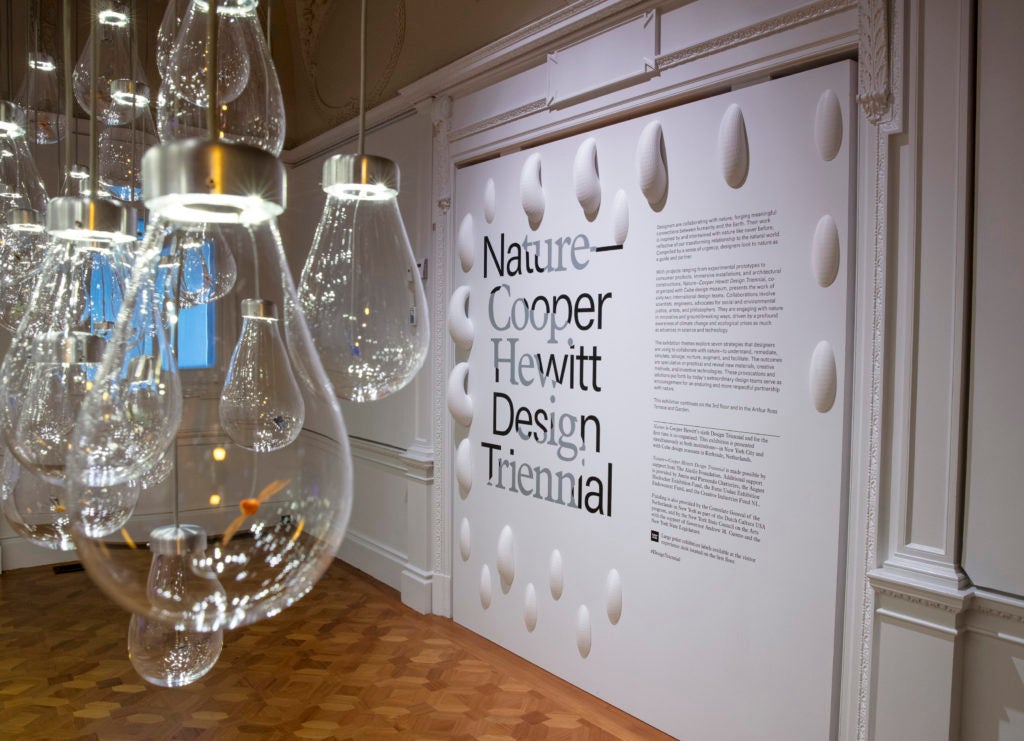 “Nature”, which explores the ways drawn from nature can address today’s environmental challenges, features 62 designers around the world. The show opened at both museums simultaneously on May 10, and will remain on view at both venues through Jan. 20, 2020.

“With 2018, the Earth’s fourth warmest year on record and global carbon emissions at an all time high, the crisis of human-caused climate change has never been more dire,” said Caroline Baumann, director of the Cooper Hewitt. 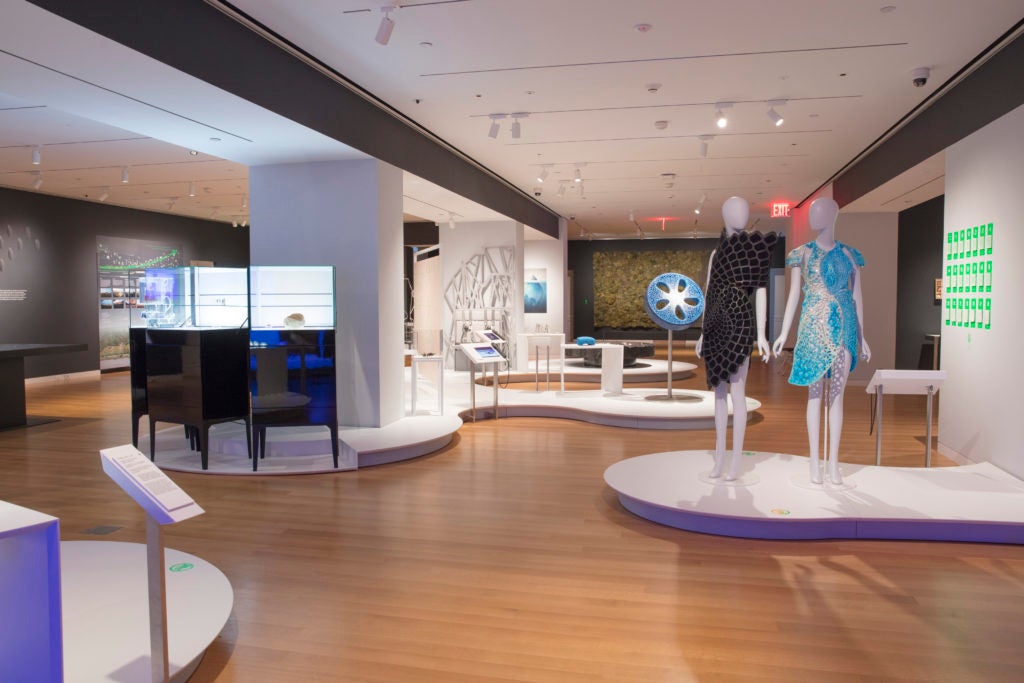 She added, “Solutions will not emerge without radical new thinking. ‘Nature’ brings together some of the most creative and intelligent designers whose works address our complex relationship to nature and its precious resources, and advocate for greater empathy for our planet.”

At the Cooper Hewitt, the sprawling exhibit opens on the main floor, includes an enormous work installed in the garden, and winds around and up to the third floor. 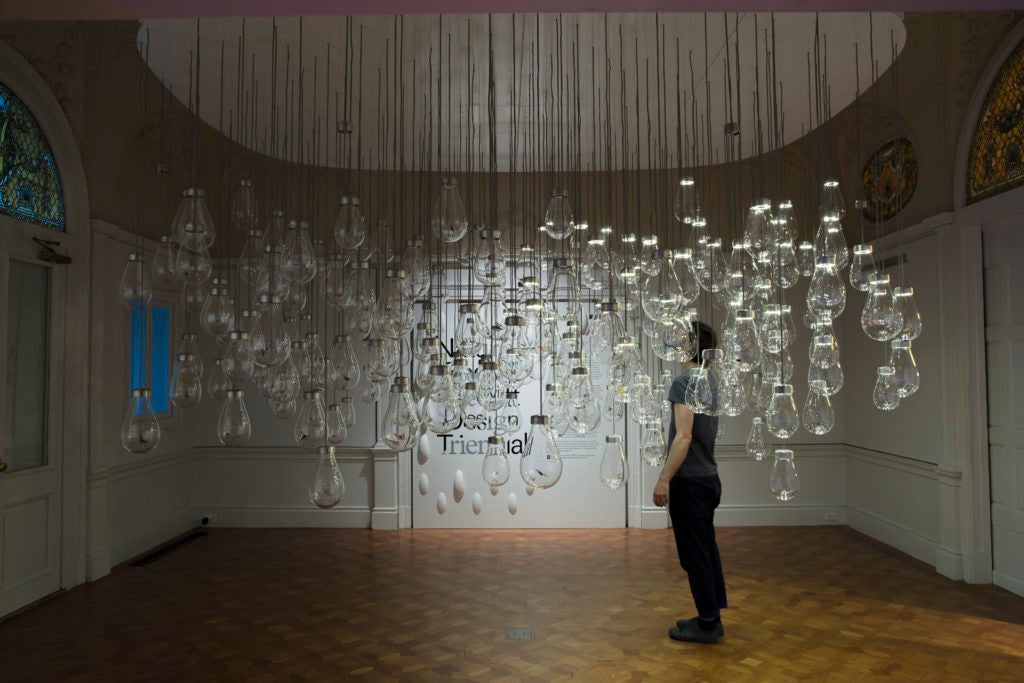 The “Understand” section explores ways designers can use scientific knowledge to enhance understanding of nature, and features a work called “Curiosity Cloud” by the Austrian design team Mischer Traxler. The work, designed to draw attention to nature’s fragility, is composed of glass bulbs, each containing a handmade version of an insect species native to New York. When visitors walk through the delicate bulbs, the insects flutter, their wings clicking against the glass.

In the garden, “Petrified River” is an immense work made of cast concrete — an imagined landscape of Manhattan before being settled by Europeans.

Back in the galleries, “Goatman” describes a project which British designer Thomas Thwaites created a complex exoskeleton for himself that allowed him to literally live and eat grass among goats for three days.

“It meant eating a lot of grass, and he missed being a human after that,” Lipps said. “But he learned a great deal about simplification.”

The “Remediate” section includes a “Sustainable Burial Suit” seeded with mushrooms, meant to be an environmentally friendly alternative to traditional coffins or cremation. While “Totomoxle” features wall panels made from heirloom corn husks, with their naturally vibrant colors.

Nearby is a “Monarch Sanctuary” which imagines how the facades of buildings could be reconciled to become butterfly sanctuaries, with places for native plants like milkweed to grow.

As if those weren’t mind-bending enough, the main hall features a work that resembles a strange, enormously tall, sort of colorful insect wing. The panels of the wing-like sculpture “Aguahoja II” are made largely of pectin and shrimp shells, with colors derived from natural sources like squid ink and beets. 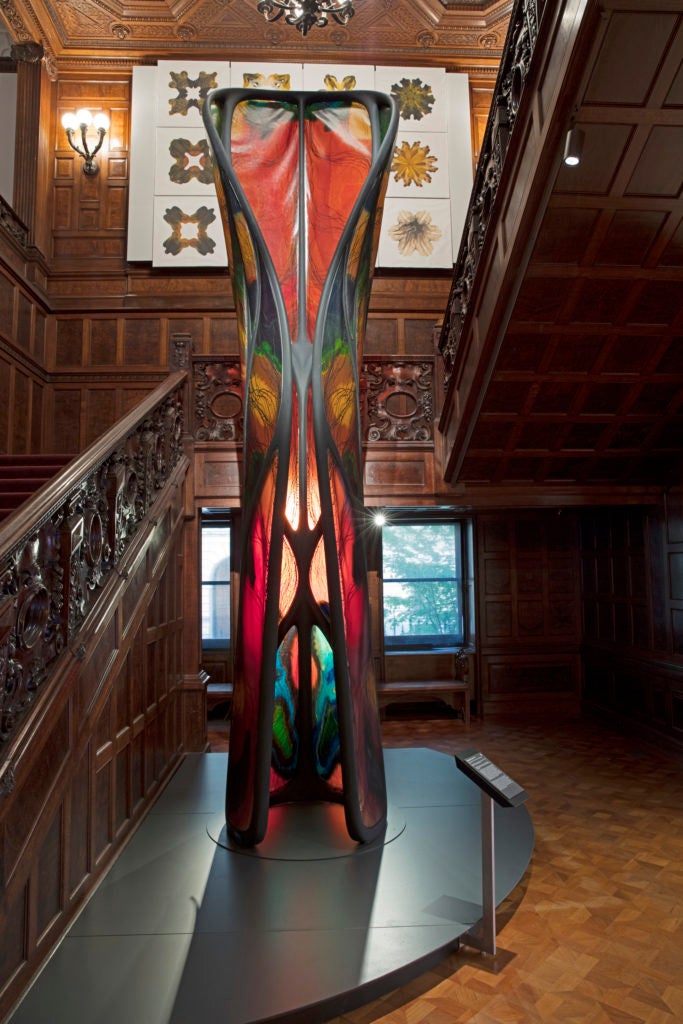 Lipps explained that the work is meant to draw attention to the fact that while permanent materials like metal and stone have long been revered, there is also value in materials designed to have a limited lifespan and then go back to nature.

On the third floor of the museum, “Fantasma” made by a Japanese design team, features naturally glowing silk made from silkworms injected with a green fluorescent protein derived from jellyfish.

Meanwhile in the “Salvage” section, ink has been derived from exhaust soot — a practical use for pollution. There is also a prototype for Adidas sneakers made entirely of ocean plastic, and another prototype of sneakers that would be entirely compostable.

Nearby are beautiful vessels made from 3D printed bioplastic derived from algae, bandages inspired by the adhesive that helps sea slugs cling to wet surfaces, and a lamp powered by the microorganisms in a cylindrical container of soil.

“There’s a level of optimism when you look around and see designers really taking on the challenge of all this,” Lipps added. “There’s a groundswell of creativity that’s continuing to reverberate.” HM/JB

Statue of Liberty museum set to open amid immigration debate

Six art galleries you can visit during your free time