This year’s party kicked off with DJ Khaled making his way to the Kids’ Choice Awards in style, with an assist from friends Kylie Jenner and the Jonas Brothers. His next-level arrival began with a ride in a Rolls Royce Phantom, followed by a cruise on a luxury yacht, and a trip on board the “Kids’ Force One” helicopter before landing at the Kids’ Choice Awards.

There was no shortage of slime and epic moments from this year’s show: Will Smith, Mena Massoud and Naomi Scott from Disney’s Aladdin arrived on a magic carpet and made the audience’s slime-filled wishes come true, dousing Smith and kids in green goo; DJ Khaled had to don a JoJo bow after losing a dance battle to JoJo Siwa in a live vote; Isabela Moner, Eugenio Derbez and Michael Peña, from Dora and the Lost City of Gold, world premiered the trailer for the upcoming Paramount Players live-action movie; DJ Khaled then surprised the audience by unboxing social media sensation Ryan of Ryan ToysReview; social media star David Dobrik, Chris Pratt, Josh Peck and Adam Sandler were soaked from head to toe; and the show culminated with DJ Khaled turning up the volume one last time with the biggest sliming of the night, blanketing the first-time host and the crowd. 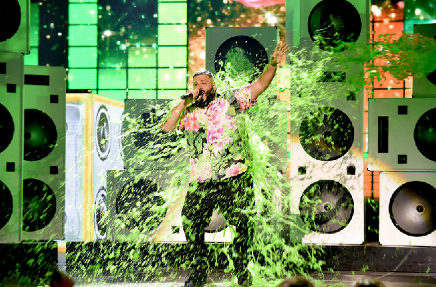 Nickelodeon’s Kids’ Choice Awards premieres in Asia on Monday, 25 March at 5pm (WIB) and 6pm (MY, PH, SG), with a same-day encore at 9.30pm (SG). Catch the replay on Tuesday, 26 March at 11am (WIB), 12pm (MY) and 3pm (PH). Fans were able to cast their votes on Nickelodeon’s digital platforms including KCA.Nick-Asia.com and the Nickelodeon Play app (Singapore and Indonesia only) on the iPhone, iPad, and Android devices. They also voted through Twitter using #KCA and the hashtag of their favorite nominee. Fans can go to KCA.Nick-Asia.com to relive all of their favorite show moments by watching video highlights from the live show and flipping through live event pictures.

How Do You Want to Help?
Help Animals (rescue, wildlife and more)

Check out the photo highlights:

Nickelodeon, now in its 39th year, is the number-one entertainment brand for kids. It has built a diverse, global business by putting kids first in everything it does. The company includes television programming and production in the United States and around the world, plus consumer products, digital, recreation, books and feature films. Nickelodeon’s U.S. television network is seen in more than 90 million households and has been the number-one-rated kids’ basic cable network for 22 consecutive years. For more information or artwork, visit http://www.nickpress.com. Nickelodeon and all related titles, characters and logos are trademarks of Viacom Inc. (NASDAQ: VIA, VIAB).