Undeniably, commuting in the Philippines is a real struggle.  Daily commuters experience how difficult and tiring it is to line up in public transport, book a taxi for hours, and deal with the worsening traffic during the rush hours in Metro Manila.

Considering this situation, most people don’t prefer to travel far from their current location because they don’t want to be stuck in heavy traffic. And if you are going to meet your “ka-barkada” from the North, and you’re living from the South  – both of you should agree to meet in a convenient location.

Recently, Twitter user @sohkatoa posted about this issue on where is the supposed “halfway point” when people from South meet with their friends in the North, and vice versa. The answer is at Glorietta, a shopping mall located in Ayala Center, Makati.

The post was supported with images from Google Maps, showing that the malls’ distance from the South (Alabang to Glorietta) and the North (Trinoma to Glorietta) is both 17 kilometers. But, this conclusion sparked different reactions from Twitter users.

Here are some of their sentiments: 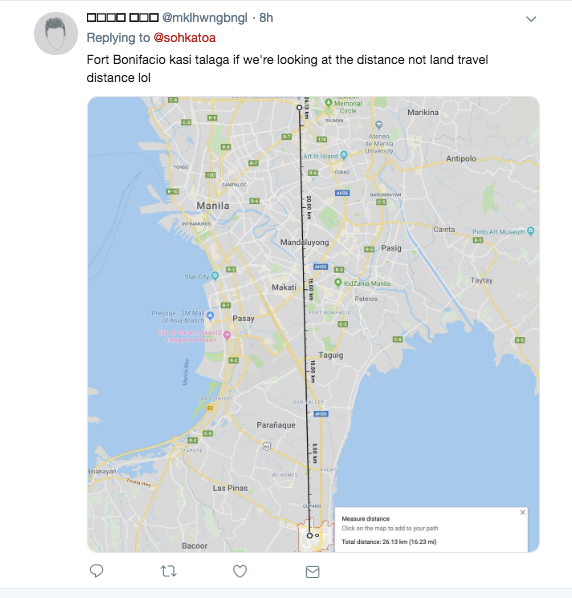 According to the Twitter user, these places were used as the main points because these are one of the famous malls from the South and North areas.

Not sure if it's fair that I used Town and Trinoma to represent South and North respectively, but both are one of the most famous malls

Though we may differ in our own opinions, the important thing is to be thankful for our friends who braved to the multiple traffic jams just to meet us.