And it’s true, making reading a habit can take us away from the minutiae of our everyday life. As we leaf through the pages, it will let us see places we have never been before; learn more about other people’s perspectives; and give us a glimpse of different cultures.

But in this social-media driven world, most people seem to be more engrossed in scrolling their newsfeed rather than spending their downtime reading a book. A study published by the American Psychological Association showed that 1 in 3 U.S. high school seniors did not read a book for pleasure in 2016. In the same time period, 82% of 12th graders visited social media sites such as Facebook, Twitter, and Instagram every day.

Jean Twenge, a professor of psychology at San Diego State University and one of the authors of the study, said that the lack of leisure reading is rather “troubling”. The statistics shows that in 1970s, 60% of high school seniors were reported reading a book, magazine or newspaper every single day. However, fast forward to 2016, only 16% of high school seniors had taken interest in doing so.

“Compared with previous generations, teens in the 2010s spent more time online and less time with traditional media, such as books, magazines and television,” she said.

Before digital media completely eats up our time, some thought of a way to revive the love of literature. One of these innovations is a vending machine that spits out short stories instead of snacks.

You might be wondering now, how is that even possible?

Short Édition, a French community publisher of short-form literature began installing short story-dispensing vending machines in one of the country’s most popular public spaces, beginning with Paris’s Charles de Gaulle Airport. They also brought the idea to the United States, where they installed story dispensers in restaurants, government offices, universities, and transportation hubs. 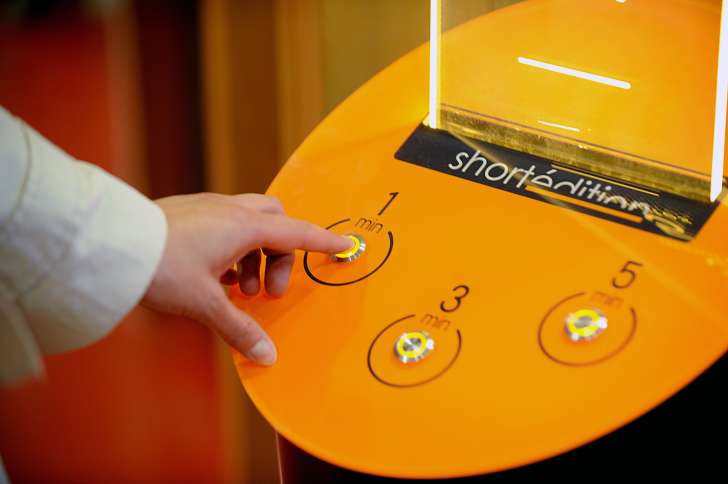 Known as Short Story Dispensers, these screen-less, stand-alone kiosks are the brainchild of Christophe Sibieude (the co-founder and head of Short Édition) and Grenoble’s mayor, Éric Piolle, a noted environmentalist who agreed to fund the company’s first eight prototypes. During the process of polishing the idea, the pair only had one goal in mind and that is to encourage commuters and bystanders to cultivate the habit of reading while waiting around rather than constantly swiping or checking their phones.

In 2015, Sibieude told Agence-France Presse that the idea occurred to them while they were in front of a vending machine containing chocolate bars and drinks.

“We said to ourselves that we could do the same thing with good quality popular literature to occupy these little unproductive moments.”

But how does this thing actually work?

Stories are dispensed from this vending machine. Adorned with three shiny metallic buttons, you may choose the length of the story you want to read: “one minute,” “three minute,” and “five minute” story.

Once the button is pushed, a short story will be printed out on a long receipt-like paper that is both eco-friendly and BPA-free. 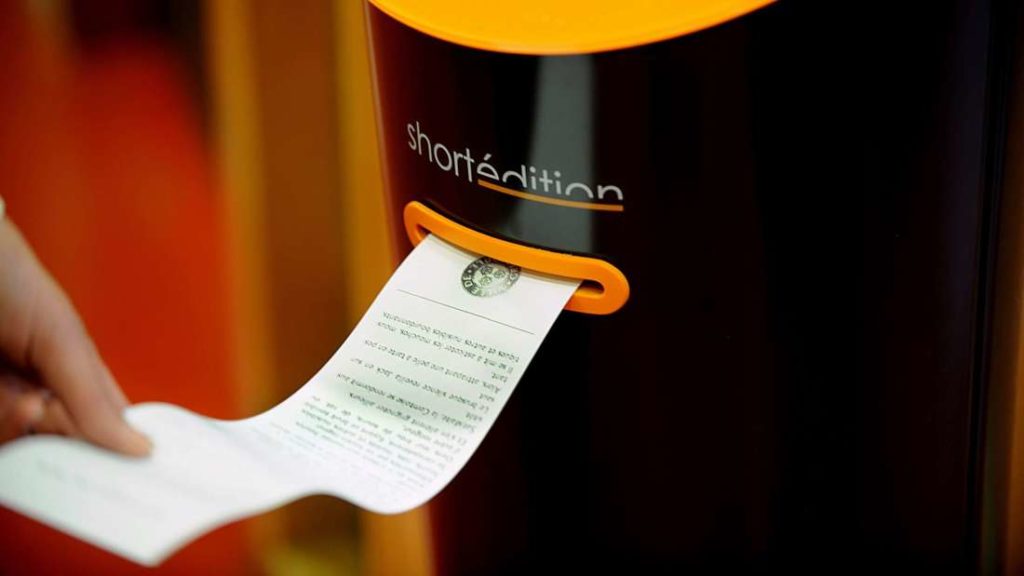 Is the story free?

Yes, the stories are free.

With 100,000 original submissions by writers that are evaluated by Short Edition’s judges, people may choose from different genres — children’s fiction, romance and even holiday-themed tales to name a few.

The Verge  also reported that the machines offer more than 13 million works by 6,800 authors, including some classics from the likes of Shakespeare and Virginia Woolf.

With the unexpected success, the company was able to install more than 150 machines—mainly in France—while the U.S. started to catch on. In fact, even film director Francis Ford Coppola became a fan of the idea that he even placed a dispenser at his Cafe Zoetrope in San Francisco.

And just a month ago, Short Édition once again caught the attention of many after the company showed off its Short Story Dispenser at this year’s International Consumer Electronics Show,  an annual gathering place for those who thrive on the business of consumer technologies.

Despite the ever-changing technology, these short story dispensers only proved that print is not dead.

LOOK: 3 Nicholas Sparks books that should be turned into movies

LOOK: Several K to 12 books called out for erroneous and misleading content