Top 10 largest sharks in the world 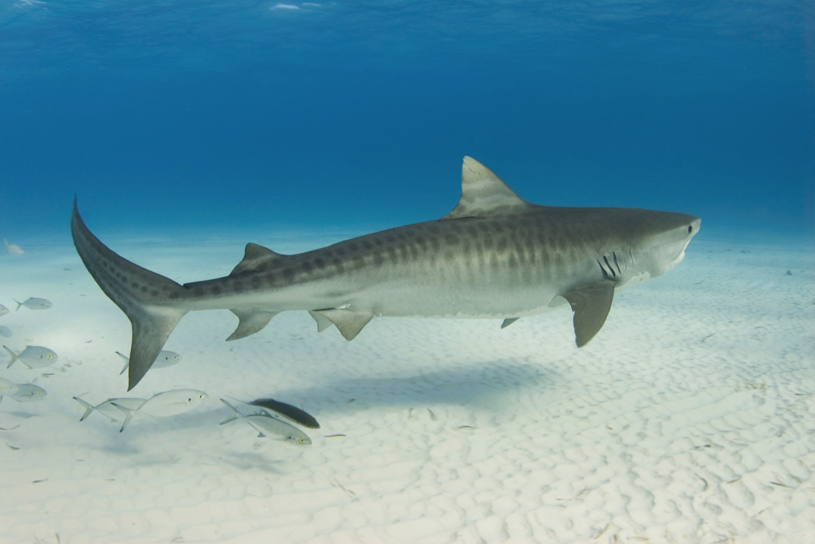 Because it’s #SharkWeek–get to know the largest apex predators of the marine world!

10. Tiger shark
Tiger sharks tend to measure in the 10 to 14 foot range, with some exceptional individuals approaching 15 feet. The largest tiger shark ever recorded was at least 17, perhaps 18 feet long. Some claim that even larger tiger sharks are out there.

9. Megamouth shark
As of 2015, only around 60 megamouth sharks have ever been caught or sighted. Of these, most of the adults encountered have measured in the 13 to 16 foot range, but scientists think these gentle filter feeders can grow at least 17 to 18 feet in length.

7. Common thresher shark
It’s all in the tail! The common thresher is a large shark by anyone’s measure, but factoring in its elongated caudal fin – which accounts for half of the shark’s length – it’s among the longest in the ocean. These sharks commonly reach 16 feet in length, with the largest confirmed at 19 feet.

5. Greenland shark
It’s up for debate whether the Greenland shark is larger than the great white, but so far lengths above 20 to 21 feet are based solely on observation, not accurate scientific measurement. Most Greenland sharks, which live farther north than any other shark species, measure in the 8 to 15 foot range.

3. Great white shark
Speaking of speculation, few sharks are the subject of more tall tales than the great white. To set the record straight, the largest accurately measured was caught off Prince Edward Island in 1988. She was 20 feet in length. But some scientists accept the 21-foot measurement for a great white caught off Cuba in 1945. The common size range is 11 to 16 feet.

2. Basking shark
While there may be some jockeying for the number three spot, there’s no doubt that the basking shark is the second largest living shark. With an average length of 22 to 29 feet, even your everyday basking shark is truly enormous. The largest on record measured 40 feet in length. But there’s no need to panic – this gentle giant is a plankton eater.