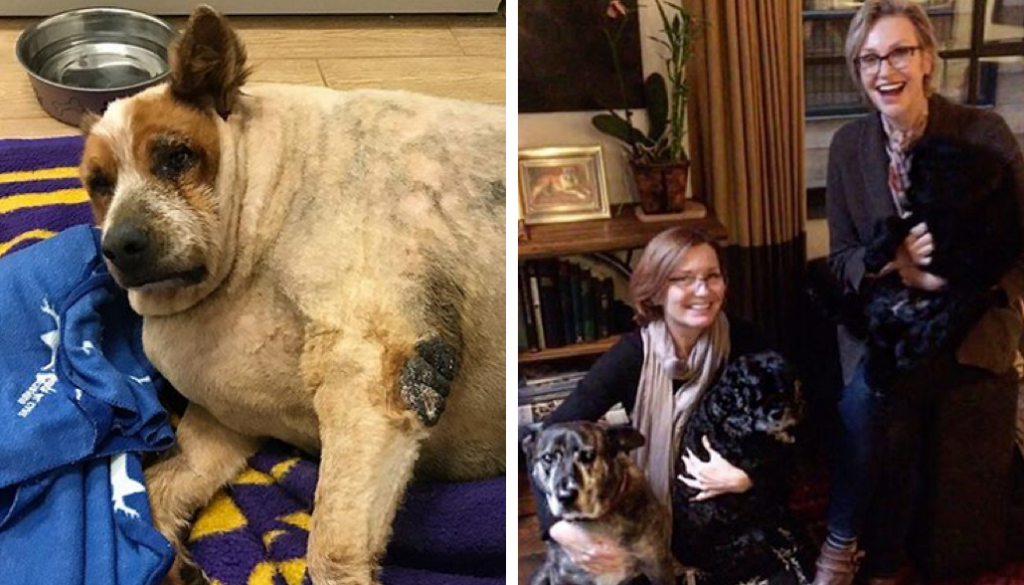 8-year-old Arbuckle was found abandoned in a field while suffering from a hypothyroid condition. At 116 lbs., he was overweight and he could barely walk, until he was rescued by The Purposeful Rescue, and adopted by actress Jane Lynch and her partner Jennifer Cheyne.

“He had sores all over his belly — probably from lying on concrete and his belly rubbing on the ground — so he was a mess,” said Lynch. “They didn’t know what kind of an animal he was at first. The Purposeful Rescue people had never seen anything like this before.”

As a rescue, Arbuckle has never lived with a family before until he was adopted. “We know his life was one of complete isolation. It looked like he’d probably been in an enclosure because he tends to want to live in a little 6-by-6 square foot,” said Cheyne.

The couple discovered the dog online while Cheyne was going through her Instagram feed, and saw the “giant” dog that was Arbuckle. They knew instantly that they had to get him.

“We have this thing about us where we love a project. We have the commitment and the passion to help these animals and [Arbuckle] was a big project,” said Lynch. “It wasn’t like I didn’t expect that I would fall in love with him. I knew I would, but I didn’t know what a kind and gentle spirit he was, and unconditionally loving.”

With the love and care of Arbuckle’s new moms, he now weighs 88 lbs., and is currently on hypothyroid medicine. “He doesn’t look like a strange creature anymore,” said the couple. “He’s being set free. It’s got to feel good for him.”