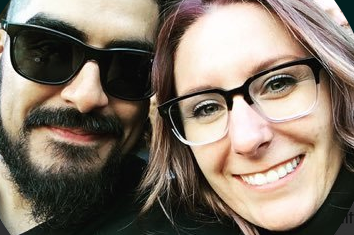 Alex and Jess Monney, a married couple from California, were planning to start anew with their bathroom renovation when cute “ghosts” from the past, aka the previous owners of their house, left them a quirky note. 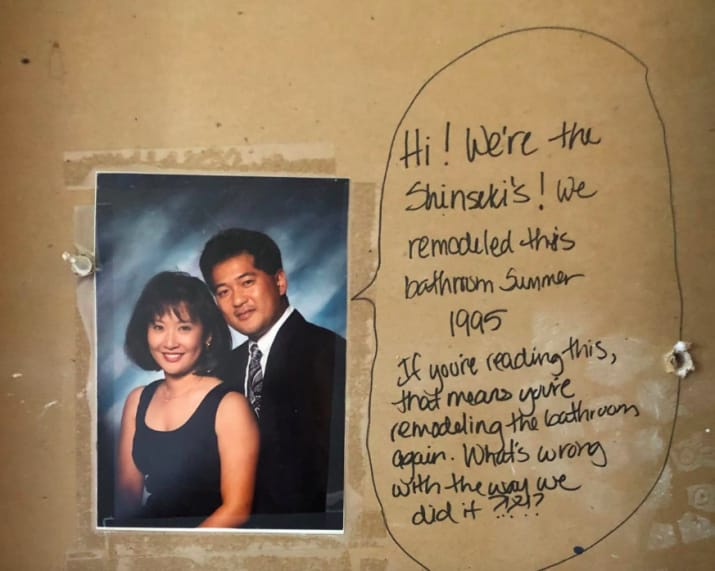 The note reads: “Hi! We’re the Shineki’s! We remodeled this bathroom summer 1995. If you’re reading this, that means you’re remodeling the bathroom again,” the note reads. “What’s wrong with the way we did it?!?!?”

Mr. and Mrs. Shineki’s pet rabbit also had a special message, too: 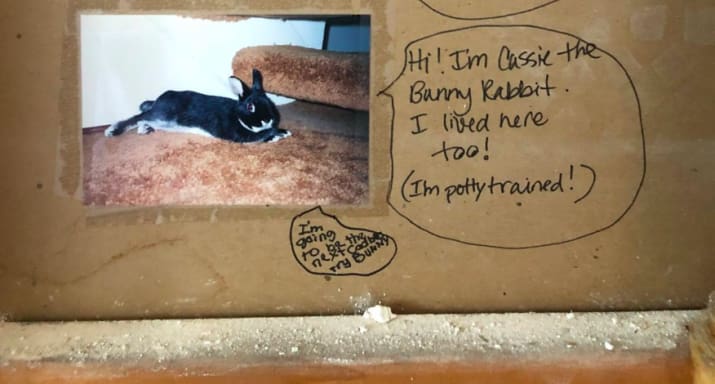 Alex never met the previous owners before, but according to reports from news outlets that have covered the story, this is what he’d like to tell the couple:

“Your bathroom, and home, is lovely. It has given us a lot of beautiful memories and we can’t wait to raise our little baby girl here. Sorry we’re changing the bathroom, but the shower is too small for me to fit in (I’m 6′ and my wife is 5′). Thank you for the amazing surprise!”

If you’re wondering what the Shinekis’ bathroom model was like, here it is:

If you know me, you know I love house projects. However, even I think I might be a little crazy for kicking off a bathroom remodel 4 weeks before I’m due. Bye bye bathroom! 👋🏻 And sorry in advance for the bathroom remodel updates to come. pic.twitter.com/yCJJN0A0KL

A couple of netizens also shared how they would also find mementos from the previous owners of their house:

Cool find! In 2000 I restored an 1890s Queen Anne Victorian, and I found some very cool things behind some bead board in the kitchen… a calendar from 1892, an American flag 🇺🇸, a book, and a box of lavender soap! As I did the restoration, I also left a note and some things 😊

My wife and I bought our first home last summer. Had to cut a hole in the bathroom wall to install a vent. Here’s what we found behind behind that wall 😳 pic.twitter.com/AU2Y4OhKEB

Replaced a wall oven in my old house and found this Nehi bottle. The house was built in the late 1950's…. pic.twitter.com/nYuNqUNlRi

Alex Monney told BBC that they would also leave a note in their bathroom for the future inhabitants of their place. “The funny thing is the renovation was supposed to be quick. We’re expecting our first baby in four weeks, so we need to get moving on our message pretty soon,” he said.

We wonder what that new note’s gonna be like! InqPOP!/Bea Constantino.

This girl documented a possible romance between two airplane passengers, and the guy responds