A simple yet touching poem shared by Twitter user @TheoNicole recently became viral for its message about acceptance. Written by Theo Nicole’s 73-year-old aunt for her church writing group, the poem talks about the use of “they”/”them” for non-binary people. The short poem echoes what most people think about the non-binary pronouns at first:

It’s a strange thing to think
And harder to say,
But they is so happy
when the effort is made.

Read the full poem below:

My 73-year-old aunt wrote a poem about my pronouns in her church writing group and it’s the sweetest thing pic.twitter.com/ROat6kdwPI

As of this writing, the post has been retweeted 24,207 times and has received 106,113 likes. Majority of the reactions were positive, with some people expressing how much the poem resonates with them: 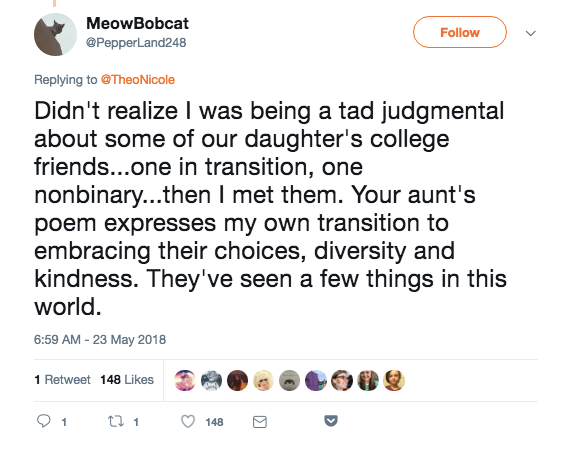 Twitter user @Homocynical wanted to pass the poem along to their local LGBTQ students group in New Zealand: 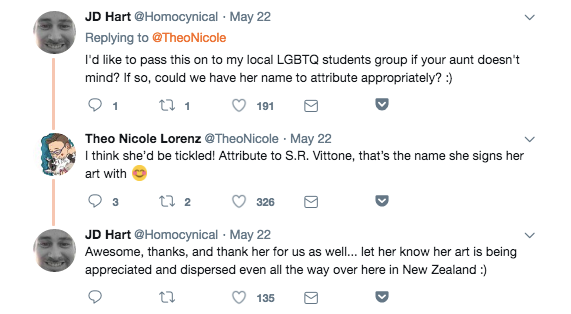 Another reader was inspired to write a poem, too: 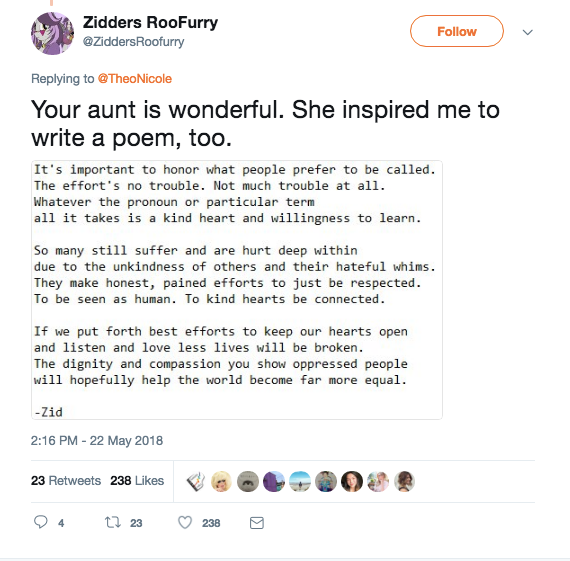 And for those who are confused about the pronoun usage, Theo Nicole—who identifies as non-binary—replied with links to articles that can help them understand: 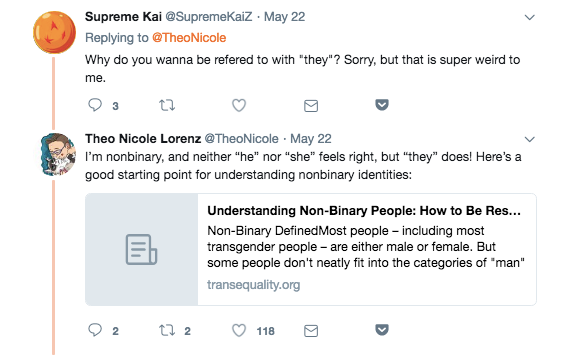 Non-binary people identify as neither male nor female, or solely as one of those two genders. They usually use “they”/”them” pronouns to better represent this in speech. According to Merriam-Webster, “they” has been “in consistent use as a singular pronoun since the late 1300s,” but its use to refer to non-binary people is relatively new. Read the excerpt below:

“There have always been people who didn’t conform to an expected gender expression, or who seemed to be neither male nor female. But we’ve struggled to find the right language to describe these people—and in particular, the right pronouns. In the 17th century, English laws concerning inheritance sometimes referred to people who didn’t fit a gender binary using the pronoun it, which, while dehumanizing, was conceived of as being the most grammatically fit answer to gendered pronouns around then. Adopting the already-singular they is vastly preferable. It’s not quite as newfangled as it seems: we have evidence in our files of the nonbinary they dating back to 1950, and it’s likely that there are earlier uses of the nonbinary pronoun they out there.”

In 2017, LGBTQ community magazine them. published interviews with a number of non-binary people where they talk about what being non-binary means for them. Here’s what activist Ian Fields Stewart had to say:

“Many people might say that nonbinary is like the grey area of gender — undefined space between more defined areas. However, because grey is a mixture of black and white it is inherently defined by the constructs of the colors it is comprised of. I think nonbinary is the whole crayon box. It is every paint on the easel. It is everything and nothing and a couple things. Nonbinary is limitless. My expression and my socialization falls on the femme side, but being nonbinary is not about what is perceived of me. Nonbinary is the liberation from the need to make myself smaller to fit into preconceived ideas of who and what I am. Nonbinary is the experience of myself without definition.”