London Marathon runners struggle in 24C heat, confuses the rest of the world

Runners were warned that this year could be hotter because of the heat absorbed by the roads and from other runners. Event director Hugh Brasher said organizers had to distribute four-and-a-half litres of water per person. It was more than any other highly participated event in the world but they still ran out of it at some point. 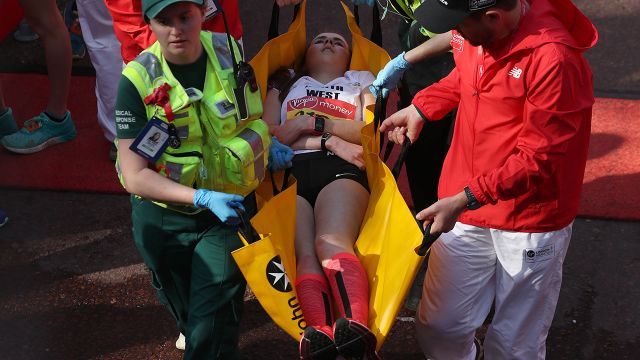 Organizers also warned that the heat would be especially difficult for those who went with fancy dress. Almost 100 runners came in outfits such as a suit of armor, a Paddington Bear costume, and ski boots — attempting to enter the Guinness World Records.

The unusual heat resulted in some runners collapsing during the race and needing medical attention. A former Masterchef contestant, Matt Campbell, who was a keen marathon runner and previously finished the Manchester Marathon two weeks prior to the event, died after collapsing 36 kilometres into the race. The cause of his death is yet to be known according to organizers.

While many London locals struggled through the 24.1C temperature, those who are living from other parts of the world can’t seem to fathom how it could be the “hottest” for the Brits.

Many compared it as “room temperature” to them and even considered a cool summer temperature.

I’m Canadian & this is considered a cool summer day to me.

Well it's considered winter here in the Philippines

Others who are used to the blazing heat of the sun sends their “regards” in the most burning way possible.

Louisiana Laughs, “you are nothing.” pic.twitter.com/du7tcFfTvw

This is how we roll in the Philippines. pic.twitter.com/95NJswePXK

The entire continent of Africa sends their regards pic.twitter.com/LUsrnX2E2i

Some came in defence of the Brits, saying that they aren’t used to the weather and “it’s dangerous heat for people who don’t experience it much.”

You guys making fun of brits who aren’t used to the weather when a guy literally died of heat stroke on the run. Our bodies aren’t good with heat over here when it’s normally very VERY mild or straight up cold, it’s dangerous heat for people who don’t experience it much.

23c is considered hot in the UK! We don’t have the best weather here, we’re used to like less than 10c kinda weather!

It’s not mediocre weather for April, and there’s a reason marathons are in early spring or late fall

the UK literally never gets ANY sun or heat, its constantly winter here so Im sorry that the very little amount of sun/heat we do get is too much for us

While the said temperature may be normal for others who experience mostly hot weather, it is unusual for the Brits who are used to winter and barely see the sun. Their reaction to heat may be “too much” for some but it shouldn’t be a debate whether the incident should be turned into a laughing matter or not when it seriously might’ve caused the death of someone.

WATCH: A summer internship that will pay you to travel the world

5 Summer looks you should rock on your next music festival

The ‘Hogwarts Mystery’ mobile game is finally here and bloody hell, it is brilliant!