Recently, another social game called #DameTuCositaChallenge is taking over the internet.

The craze started in May 2015 when an animated video of a dancing alien was uploaded on YouTube by Kuki Graph. The video featured a creature moving rhythmically to the tune of ‘Dame Tu Cosita’ or ‘Give me your little thing’ – a song by Panamanian producer and artist El Chombo. Since then, the video has been deleted by the user.

Then on October 2017, a remake of the video was uploaded on the Dailymotion website, where it gained 19,400 views. The video was posted by user ArtNoux who animated a green alien dancing to the same song. In its caption, the extraterrestrial creature was named ‘Popoy’  and was said to be possessed by reggaeton vibration – which explains its strange dance moves. 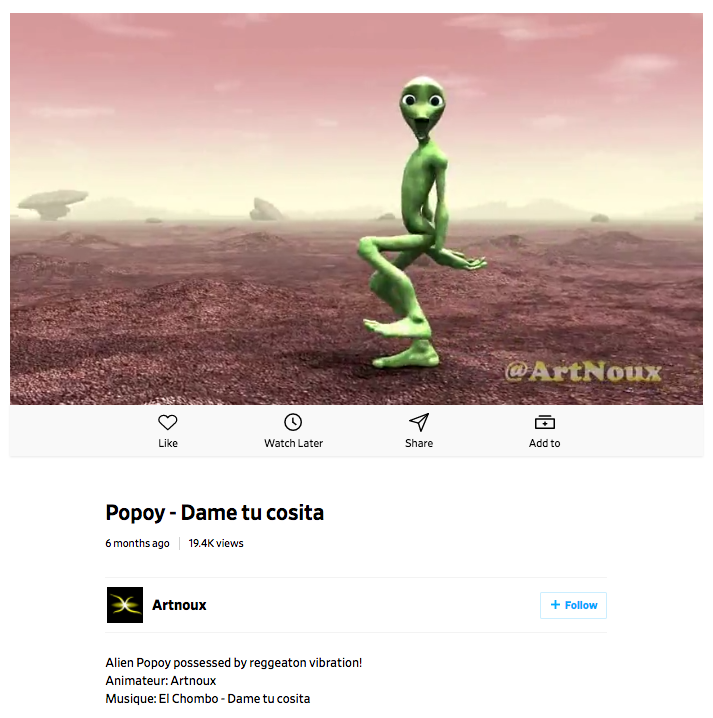 ArtNoux then shared the video on his Facebook account with the querying caption, “Qui danse comme un Popoy?” (Who dances like Popoy?) – as if he was challenging the viewers to dance better than Popoy. This, in turn, garnered him more than 177,000 views, 1,900 reactions, 3,608 shares, and 849 comments on the video post.

Moreover, Ultra Music uploaded the video to their YouTube account last April 5, 2018. It reached a total of 108 Million views, 1 Million likes, and nearly 70,000 comments to date.

In this video posted by John Rey Calibo, a day after her concert, the multi-awarded TV personality can be seen dancing side-by-side with Popoy.

Geronimo’s facial expressions and peppy demeanour truly wowed the viewers in this epic challenge. The video swiftly obtained 1.7 Million views, more than 65,000 reactions, nearly 35,000 shares, and 5,600 comments in the few days it was also uploaded to Facebook.

Netizens, including her Popsters, couldn’t help but appreciate her impressive dance number.

As a result of its popularity, the video can now be seen being performed by netizens on Snapchat and Musical.ly.

Looks fun and interesting, right? Who do you think did it better, Popoy or Sarah G? Tell us in the poll below.

This woman upstaging everyone on the Zumba dance floor is your new spirit animal, and the internet agrees

People, the ‘Dying Inside Challenge’ has to die and you know it

IN PHOTOS: The Script breaks free on ‘Freedom Child’ tour

The Voice PH Alumnus, Poppert to hold his first ever solo concert #Regalo