Dinner In The Sky: A Moveable Aerial Feast

In Partnership with:
Hearing the Bee Gees’ “Stayin Alive” while hoisted 150 feet off the ground seems like a wet bed-inducing fever dream that belongs only to your personal archive of #ThingsIRegret marvels — except it isn’t. The song seems almost like a contemptible mockery when put into such a context, only because you’re no longer sure if dining in the sky is really an experience of a lifetime or literally an experience between life and death. Or both.

60 minutes back: 5:00 pm, Solaire Resort and Casino, Parañaque City. Invited guests to Dinner In The Sky Philippines’ formal opening were ushered inside the VIP Lounge by a line of hotel staff. Upon entering, guests were made to sign a waiver and indemnity form, slapped with a numbered white wrist tag, and offered by the receptionist to order anything they may possibly want from the bar. It’s harder to pretend when nervous, and the pre-ride remnants are telling: a half empty —or half full? — glass of Coke, unfinished white wine, anxious phone scrolling.

Just what else are people supposed to expect from Dinner In The Sky? While the name speaks for itself, Dinner In The Sky promises a novel and unique dining experience, a “thrilling culinary adventure” which has deservedly earned its spot in Forbes Magazine’s “Top 10 Most Unusual Restaurants”. 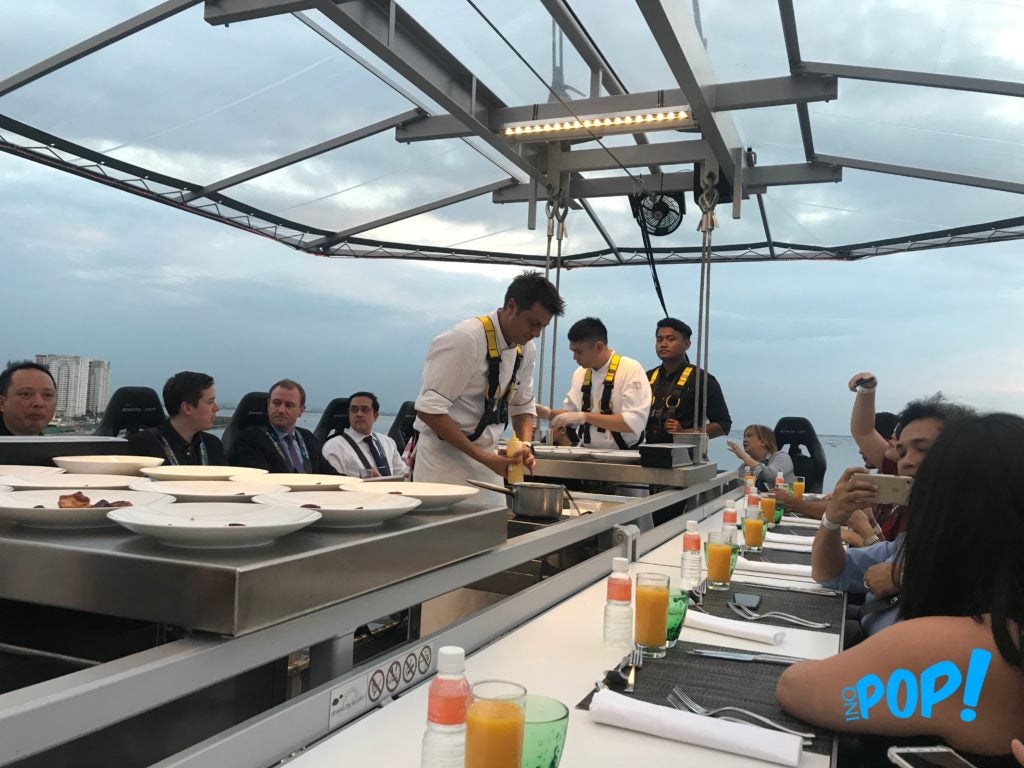 Clock-hands separated at equal distance. At 6:00 pm, guests were led to Solaire’s Esplanade where bags were deposited inside the tent’s lockers. Guests were called-in in two, and settled in their respective seats where they were strapped and buckled by the safety officers. The esteemed Hylton Le Roux of Solaire’s Waterside restaurant was the night’s chef, joined by commis Patricia Jimena and Kevin Patricio.

Stefan Kerkhofs, who founded Dinner In The Sky with partner David Ghysels in Belgium 12 years ago, joined the entourage and the table finally began its ascent to the heavens. The rise was ostensibly smooth and steady, none of the heart attack-causing climb most of the guests conditioned themselves to prepare for. Until, of course, each peered down and clutched their hearts. It is apt to say that as for all adventures, there suffices a single fear.

150 feet off the ground. 45 meters. A 19-storey building. Completely in the mercy of gravity, air resistance, and a mechanical crane. It would take about 3 seconds, more or less, for one to reach solid ground if plummeting from such a great height, three insufficient seconds to scream one’s self-hoarse with regret before the final splat. For a self-indulgent junketeer, it may be an absurd and expensive way to die. For the urinary-incontinent, it is regrettably a day mostly cloudy with a 20 percent chance of golden showers; for a believer, perhaps their last chance at a sign of the cross; and for a tita, an essential selfie with an awkwardly misplaced #YOLO on the side may be apropos.

But the key is to look calm and unperturbed, poised and poker, of nonchalant “what do you mean I’m scared, of course, I’ve done this many times before” while silently reciting the litany of the Blessed Virgin Mary inside the head.

It was during this crucial moment when commis Jimena’s words were a comforting sound to the ears, as she repeatedly told guests, “It’s not scary. Don’t look down, except if it’s the food. Just look down on the food.”

And she was right. It was only frightening for the first 15 minutes anyway, and the fare was most spectacular it made up for all the deep-rooted angst. The Latin-inspired four-course menu was an intricately-designed building up of the senses, from the first course down to the clever dessert, each explained with fervor by chef Hylton before wishing guests to tuck in and enjoy. 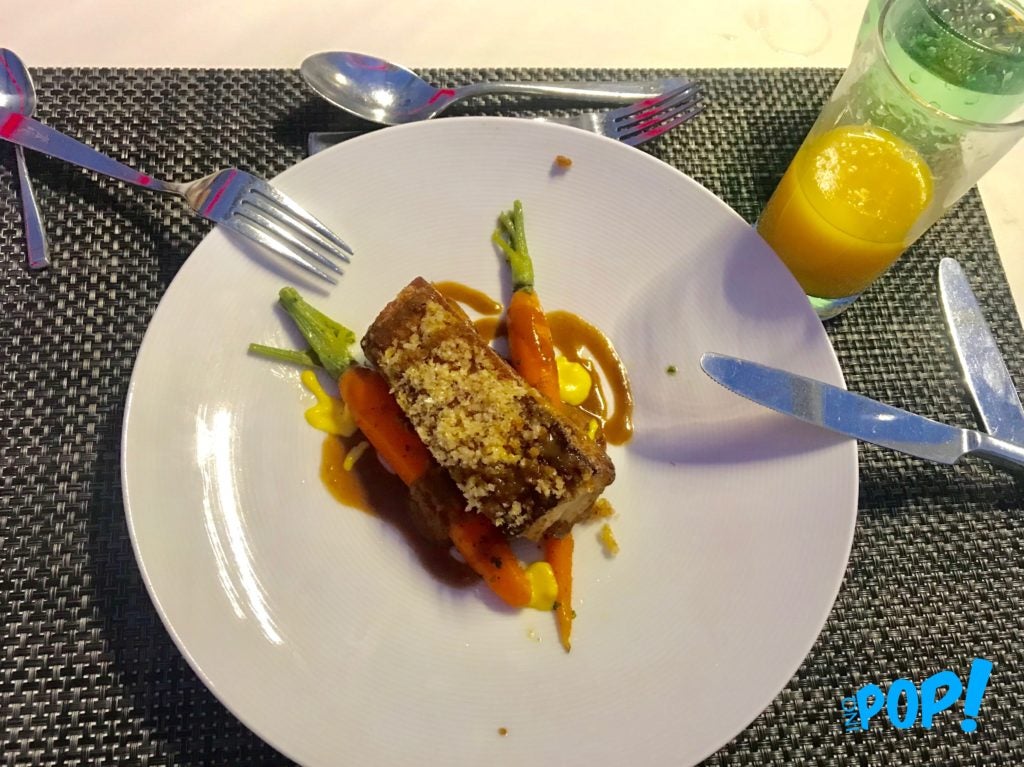 A vegetarian menu, too, may certainly be requested with one’s discretion. 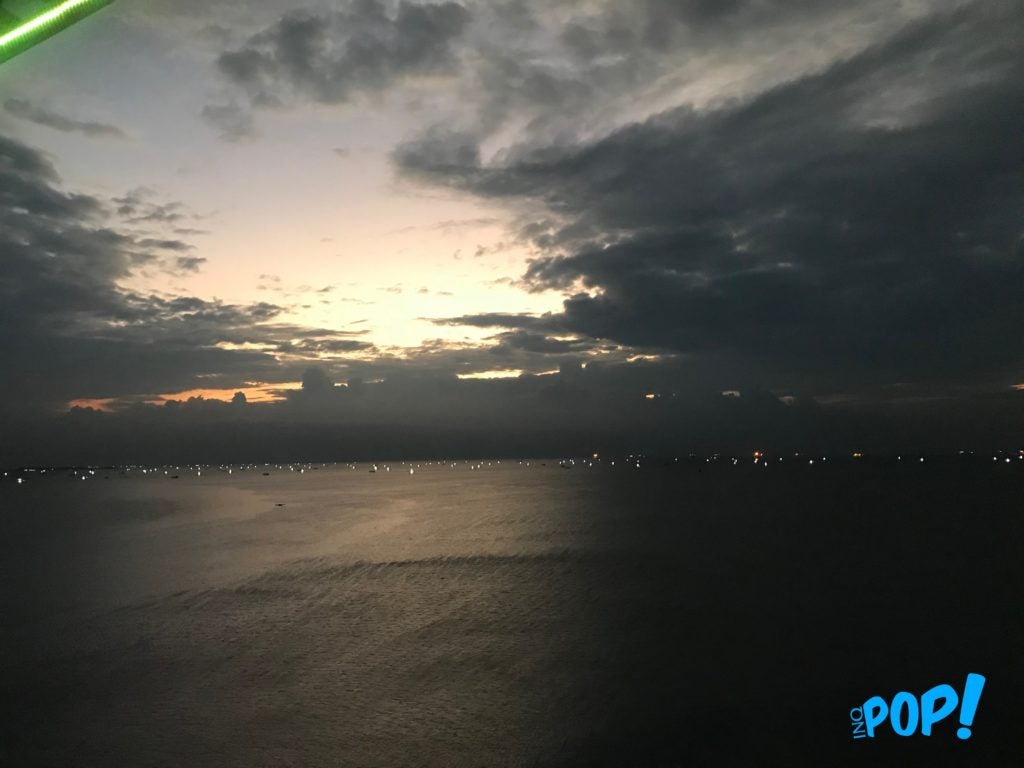 Truth be told, the difficult part was not knowing whether one should keep eating or pause to revel in the view: both were overwhelming. A slight turn of the head to the left stands the towering Solaire building with its winking neon lights. On the right, there is the breathtaking seascape of Manila Bay set in a background of an orange sunset. Meanwhile, a quick glance downwards allows one a sight of ant-like cars weaving in and out of traffic, and people no bigger than motes of dust. 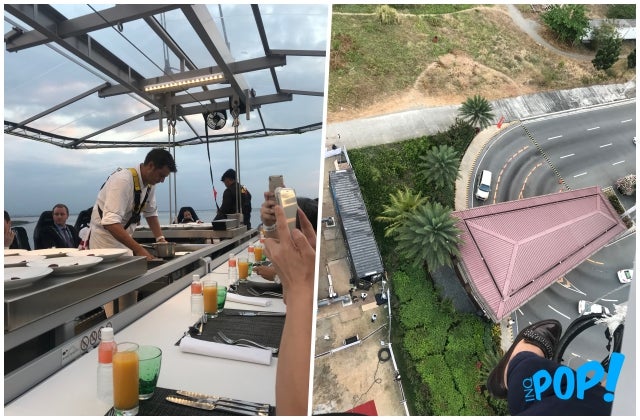 Food, of course, imperiously ruled the golden hour, and it didn’t take much for the sumptuous dinner to pass one by. The sun had made its own quiet descent, and the platform soon begun its steady return groundward, just in perfect time for the guests to have the last licks of their dessert spoons.

Truly it was an indulgent and sumptuous affair, one worthy of a modern Marie Antoinette’s “Let them eat in the sky!” because a simple cake would just no longer suffice. For the general public, an Economy class seat costs a dear P9,990 and goes up to P14,990and P24,990 for Business and First class, respectively.

In many ways, calling Dinner In The Sky an experience of a lifetime is easy — if not all too apparent — for absent now are the jaded pretensions and angst of the bygone day. They say one is most alive when closest to death, and the Bee Gees’ “Stayin Alive” holds as the apt tune for the aerial feast, as one is almost compelled to laugh after eating in the face of death. No expenses were spared. No words will be, too. Stripped of all the trimmings, one is only left with a lingering, insatiable desire for flight, itchy feet longing to have another go at the skies. At this point, reaching solid ground again almost seems criminal, if not cruel.

Up for the Rise: 5 things you need to know about Dinner in the Sky Philippines