For ten years, photographer Raymund Sarmiento has been trying to take a perfect shot of the sunset casting a silhouette over the Mount Samat Cross. He tried to capture the “Bataan Cross sunset” from a building in Quezon City every year, but didn’t have much luck with the perfect shot.

This year, he finally succeeded.

According to Sarmiento, people only have two chances per year to achieve the shot when shooting from a fixed location. He adds that capturing the sunset is challenging due to the earth’s orbit around the sun and the unpredictable weather.

Sarmiento follows a diagram in astronomy called an analemma which shows “…the variation of the position of the Sun in the sky over the course of a year, as viewed at a fixed time of day and from a fixed location on the Earth.”

“The Earth orbits around the sun and if you take photos of the sun from a fixed location at the same time per day, and combine them in one frame, it will form a figure of 8,” he says.

In 2013, he was also able to take a photo of the silhouette of the Mount Samat’s cross during sunset. And on the same date this year, he got better shot of it.

Silhouette of the Bataan Cross inside the disk of the Sun 🙂 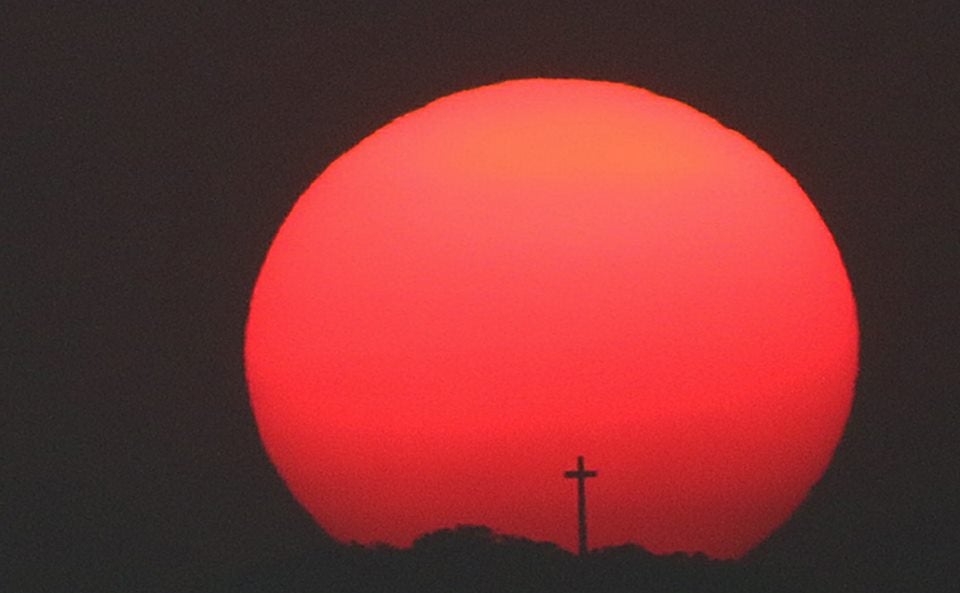 “Take note parehong March 13 from the same QC location so it means pretty much consistent ‘yung Earth’s orbit around the sun. It will be a different date and time if you are shooting the sunset from a different location,” he explains.

Sarmiento says that his perseverance to capture the sunset shot for ten years is because he finds it challenging and interesting.

“It’s a very interesting configuration. I am hoping sana that Bataan will put two more crosses beside it portraying the three Crosses ng Mt. Calvary/Golgotha…”

Watch the video of the sunset below:

Re-aligning individual cropped frames of the Bataan cross sunset via image rotation/x-y shift due to the fact the shots were acquired via a "handheld" dslr. Thus the need to compensate for the rotation and image shift. This is not necessary actually if the camera was on a tripod :D. Here she is again after the alignment process playing at 15fps. And yes, i was in QC documenting/capturing the sunset event 🙂

Flat Earther attempts to prove Earth isn’t round, blasts off in homemade rocket