These are great times to be a woman. Yes, we still hear stories of harassment and discrimination almost every other day, but we’re hearing something else: stories of women standing up for one another and demanding accountability. We heard about the #MeToo movement around the world, Times’s Up in Hollywood, and of countries like Iceland working to solve the gender wage gap.

There’s still a lot that needs to be done, though. And there’s nothing like a good book to get you inspired, enraged, and motivated to join the ranks of women everywhere who are fighting against the patriarchy. That’s why we put together this list of fiction, poetry, and nonfiction feminist titles.

Check them out below:

1. We Should All Be Feminists by Chimamanda Ngozi Adichie 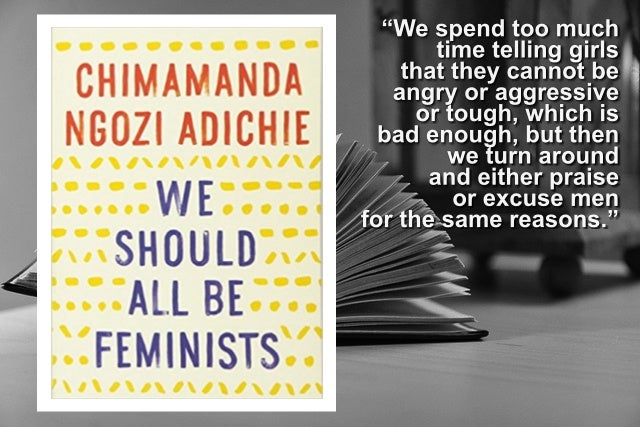 Chimamanda Ngozi Adichie is the multi-awarded Nigerian author of novels like Americanah, Half of a Yellow Sun, and Purple Hibiscus. In 2012, she delivered a now widely-popular TedTalk speech about why the way gender is performed and enforced in our current society is a “grave injustice.” This book, which is an eloquently-argued essay that often draws from the writer’s own experiences, is adapted from that speech. It talks about what it means to be feminist in the twenty-first century, why feminism needs to be rooted in inclusion and awareness, and—as the title puts it—why we should all be feminists.

2. A Girl’s Guide to Joining the Resistance by Emma Gray 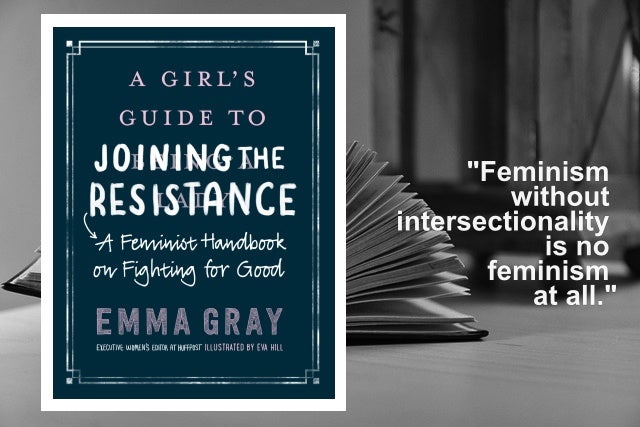 Spurred to action by the election of Pres. Trump in the US, Huffpost’s Executive Women’s Editor Emma Gray created this book that is intended as an introduction to feminism for young girls as well as to everyone who is looking to get more involved in gender issues. The book is a collection of Gray’s interviews with march organizers, senators, long-time activists, and newcomers across political movements. It also includes a “guide for how to choose good news sources and make sure you’re getting quality information,” “practical instructions on how to get involved and stay involved,” and “advice for self-care and how to stay involved without exhausting yourself.”

3. The Handmaid’s Tale by Margaret Atwood 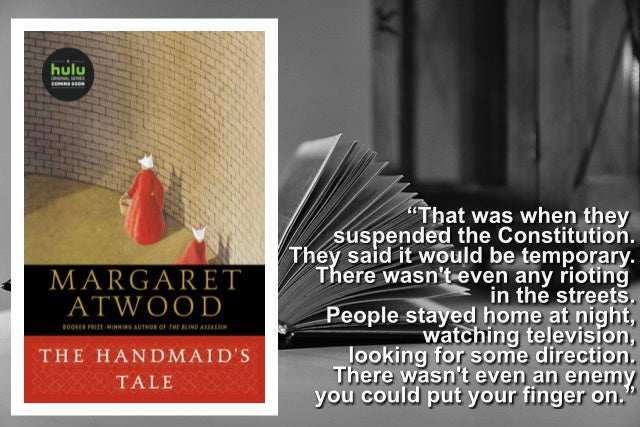 The Handmaid’s Tale is one of those novels that will haunt you long after you’ve finished reading it; not only because of how well it is written but also because of how terrifyingly possible and close to reality it seems. It tells the story of Offred, a handmaid in the the Republic of Gilead. The role of handmaids is to lie once a month as their Commander tries to get them pregnant; Offred and the others are only valuable if their ovaries are viable. But before she became a handmaid, before any of these things happened, she was a wife and a mother. She had a job and had money of her own—she was an independent woman living a normal life. The story of how all that was taken away from her is a dire warning about what could happen in the real world if we do not defend our rights.

The Handmaid’s Tale has been adapted into a Hulu series starring Elisabeth Moss, Samira Wiley, and Joseph Fiennes.

4. Men Explain Things To Me by Rebecca Solnit 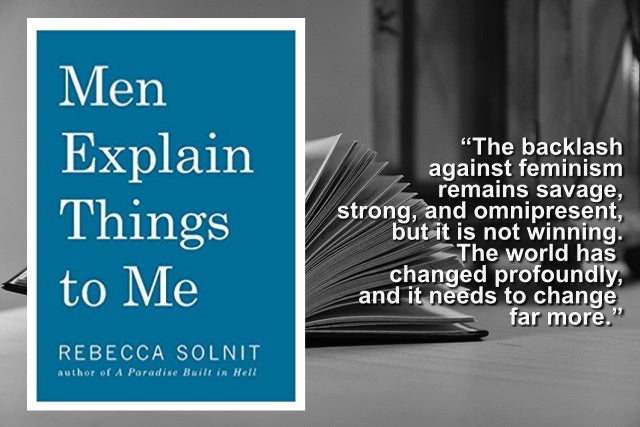 This collection of essays by Rebecca Solnit tackles gender issues including sexism in the workplace and marriage equality. Solnit writes in a very conversational tone, making this book an essential for budding feminists or to anyone who just wants a refreshingly clear and entertaining book about things that all women have experienced before, like being mansplained to. And by the way, did you know that the term “mansplaining” was coined in 2008 after Solnit published a portion of her essay “Men Explain Things To Me” in the Los Angeles Times? 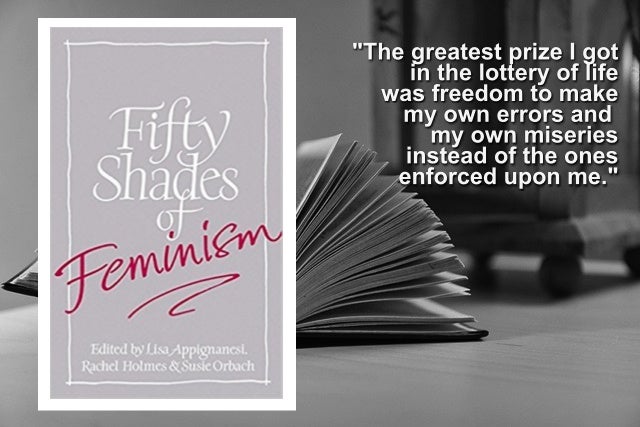 The idea for this book first came to the editors as they were discussing the rise to popularity of the Fifty Shades of Grey books and what that means for women. In this collection, 50 women—writers, politicians, actors, scientists, mothers—reflect on what being a woman means to them today. Each essay has a unique point of view on the issues that continue to affect women today like domestic violence and discrimination in the workplace. 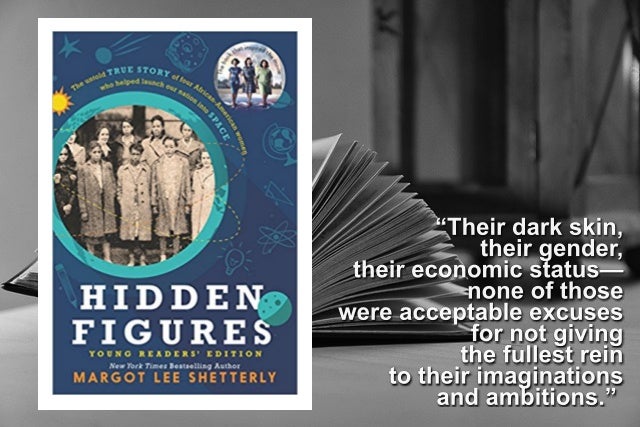 Hidden Figures tells the amazing true story of Dorothy Vaughan, Mary Jackson, Katherine Johnson, and Christine Darden, the four Black women mathematicians and engineers that worked at NASA even before John Glenn orbited the earth or Neil Armstrong walked on the moon. These women were part of the “West Computing Group,” which was separate from their white counterparts because of the Jim Crow laws. They were responsible for computing for the numbers necessary in order to launch spacecraft and astronauts into space, during the time when the United States was in a two-man race with Russia to do so. Their story is an inspiring tale of perseverance in the face of discrimination.

Hidden Figures has been adapted into a film starring Taraji P. Henson, Octavia Spencer, and Janelle Monae in 2016.

7. This Bridge Called My Back edited by Cherrie Moraga and Gloria Anzaldua 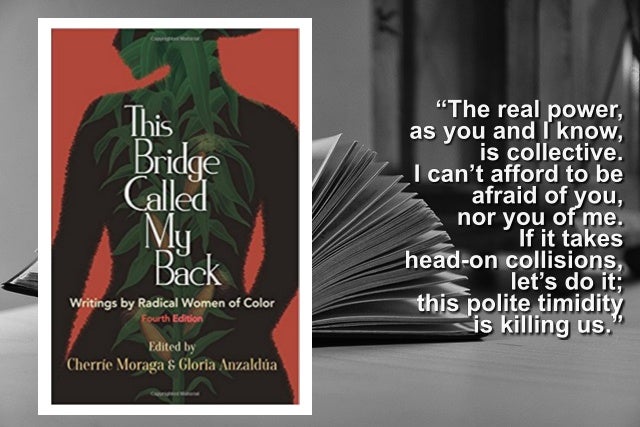 First published in 1981, This Bridge Called My Back  is a collection of written works—essays and poetry—by Black, Latina, Asian, and Native American women that was the first to express and insist that feminism needs to be intersectional in order for it to be real. These women of color wanted to do away with the idea that white feminism is good enough for all kinds of women, because they clearly did not share the same experiences. Today, the book remains worth-reading because it helps you gain an understanding of how race and class affect gender issues, and why intersectionality in the movement is vital.

8. The Vanishing Act of Esme Lennox by Maggie O’Farrell 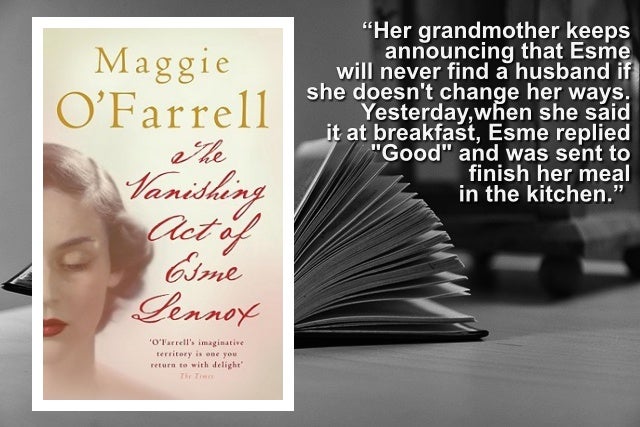 The Vanishing Act of Esme Lennox is a novel that follows Iris Lockhart, whose ordinary life is turned upside down after receiving a phone call. The phone call was from the Cauldstone Asylum, and she was told that her great-aunt Esme is being released and needed a relative who can help her. The only problem was Iris never knew Esme existed, because Iris’ grandmother always claimed to be an only child. Esme, as it turns out, was a “difficult” child—and after 61 years of being locked away, she is ready to reveal the family secrets that led to her confinement. The novel is a riveting story about how society sought to repress independent women like Esme in the past. 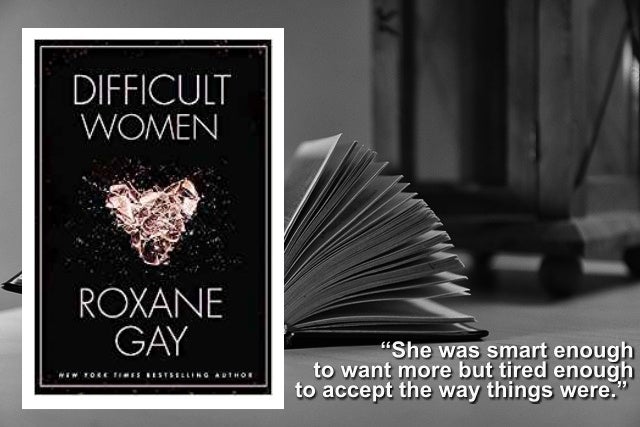 Difficult Women tells of hardscrabble lives, passionate loves, and vexed human connection. The women in these stories lived lives of privilege and of poverty, are in marriages both loving and haunted by past crimes or emotional blackmail. Reading through the diverse tales in these collection, it’s hard not to find a story that you can relate to; you’re sure to find a “difficult woman” you can identify with. Roxanne Gay’s other books, Hunger and Bad Feminist are also worth reading. 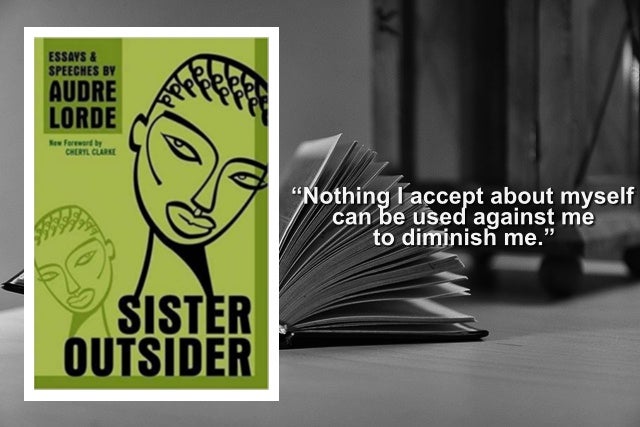 Audre Lorde was one of the most influential writers and activists during her time. In these collection, you can read fifteen of her most enlightened and inspiring essays and speeches that tackled gender, race, and class issues. Audre Lorde was very vocal about her own experiences, and these writings encourage readers to be the same. Like she said: “My silences had not protected me. Your silence will not protect you. But for every real word spoken, for every attempt I had ever made to speak those truths for which I am still seeking, I had made contact with other women while we examined the words to fit a world in which we all believed, bridging our differences.”

11. The Power by Naomi Alderman 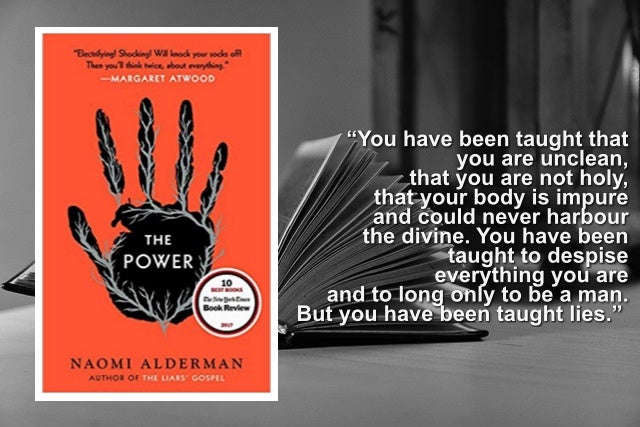 In The Power, the world is a recognizable place: there’s a rich Nigerian boy who lounges around the family pool; a foster kid whose religious parents hide their true nature; an ambitious American politician; a tough London girl from a tricky family. But then a vital new force takes root and flourishes, causing their lives to converge with devastating effect. Teenage girls now have immense physical power—they can cause agonizing pain and even death. And, with this small twist of nature, the world drastically resets.  This novel was one of the most-acclaimed works that came out last year, and was also included in former US President Barack Obama’s favorite reads.

12. Teaching My Mother How To Give Birth by Warsan Shire 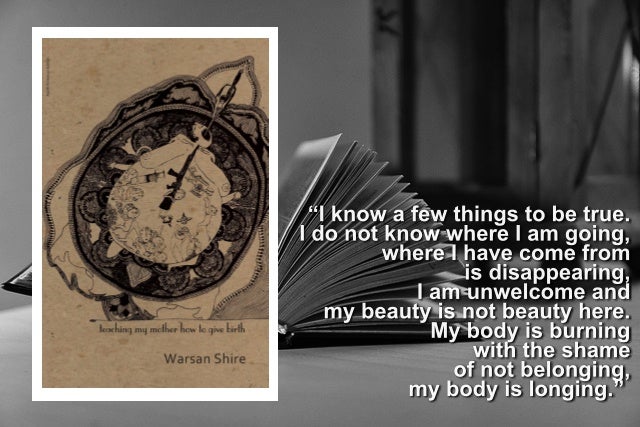 In this brief yet striking collection of poems, Warsan Shire writes about migration, violence, and the feeling of being the “other” in all places and at all times. She is a Kenyan-born Somali poet and writer who is based in London. Born in 1988, Shire is an artist and activist who uses her work to document narratives of journey and trauma. The collection became more popular after Beyoncé’s included it in her iconic album Lemonade. 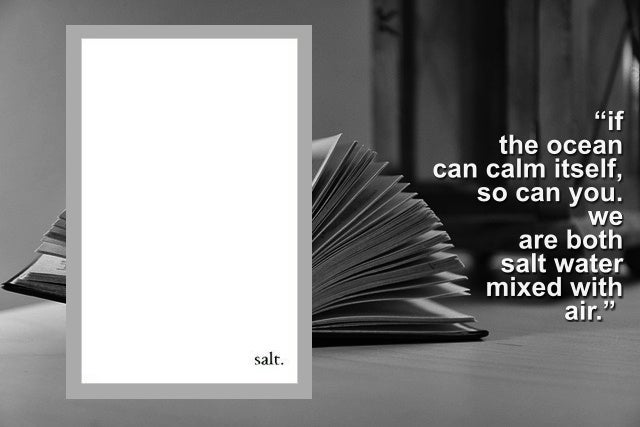 This collection is arguably one of the best among the many short-form poetry books that have found popularity recently. Nayyira Waheed first became popular as a poet on Instagram, and has since touched many readers with her short and tender poems. The collection makes for easy reading, and it just might inspire you to try writing your own. 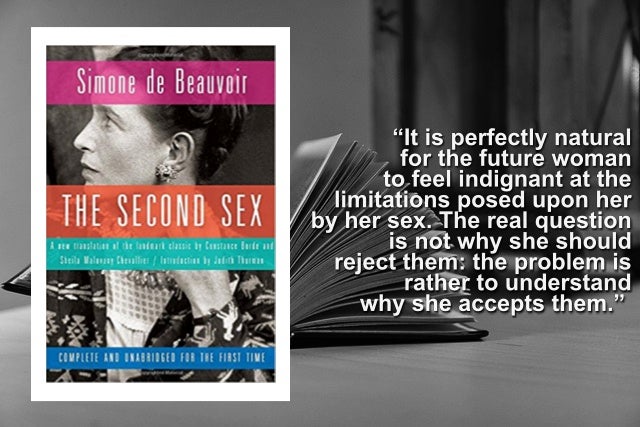 If you’ve read this far down our list, then we consider you a very serious bookworm looking for your next feminist read. Behold: often referred to as the feminist bible, The Second Sex by Simone de Beauvoir is the landmark text that analyses the notion of “woman.” The books goes through a thorough and rigorous exploration of history, biology, and sociology in order to work out the roots of inequality and sexism, and then provides well-supported and strong arguments against patriarchy. It’s an extensive academic text that’s not as easy to read as the other books on this list, but it’s still worth diving into because of how relevant it remains today.

15. The Dialectic of Sex by Shulamith Firestone 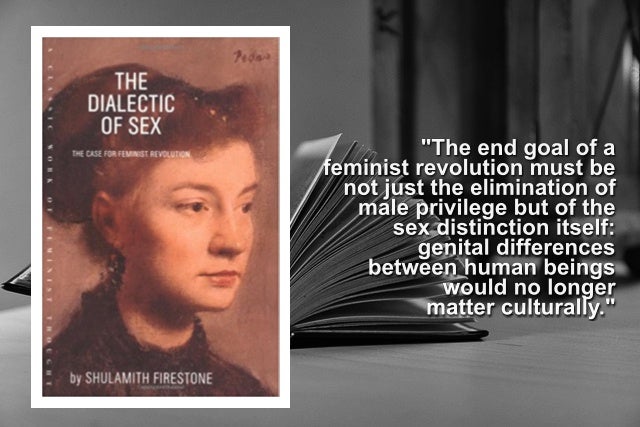 Written in 1970, The Dialectic of Sex outlines the main assertions of radical feminism. As one of the blurbs on the book states, “No one can understand how feminism has evolved without reading this radical, inflammatory second-wave landmark.” Like The Second Sex, this book begins with an in-depth analysis of the current political systems in place. Firestone deftly combines and builds on the works of  brilliant minds like Beauvoir, Freud, and Marx in order to explain the root causes of oppression. She also touches on the first-wave of the feminist movement and talks about both the admirable and regrettable events that took place then. At the end, Firestone combines all of her arguments and theories and presents an alternative to our current society, where “sex distinction between human beings would no longer matter culturally.”

What other inspiring feminist books have you read? Tell us in the comments section!