Missed out on some of 2017’s most memorable films? 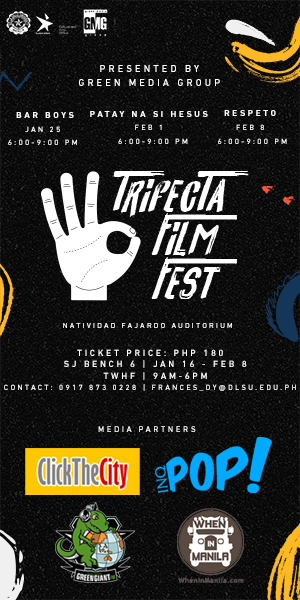 The DLSU Green Media Group, under the auspices of the Culture and Arts Office of De La Salle University – Manila presents the Trifecta Film Fest 2018, dishing out three films that benchmarked 2017 as a remarkable year for Filipino films.

Now on its third run, TFF offers a refresher to its audience on films that made it to our must-watch lists and participated in last year’s film festivals. The festival will first feature Bar Boys, a film following the lives of four young men as they go through the trials and joys of law school, on January 25.

It will also be screening Patay Na Si Hesus, a comedy-drama that brings you on a road trip across the Visayan region with a dysfunctional family of four. Join Iyay, Judith Marie, Jay, Hubert, and their dog Hudas on an adventure as they travel to reunite with their estranged patriarch, on February 1.

Lastly, but certainly not the least, TFF will feature Respeto, Cinemalaya 2017’s Best Picture winner, Respeto. Using the urban stylization of rap, it conveys a powerful message that echoes the Philippines as we now know it. Listen to Hendrix’s truthful beats on February 8.

Catch these films at the Natividad Fajardo Rosario – Gonzales Auditorium, Br. Andrew Gonzales Hall in DLSU – Manila, with an exclusive open forum after each. Tickets are at PHP 180 per film. For more details, contact Frances Dy at 0917 873 0228 or message the DLSU Green Media Group Facebook page at fb.me/GreenMediaGroup.