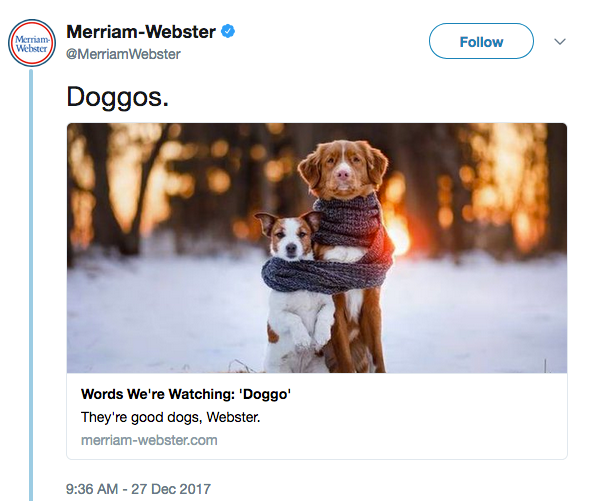 On the last week of 2017, Merriam-Webster, America’s most trusted dictionary for the English language, tweeted something that got all dog lovers and dog parents   excited:

Merriam-Webster finally acknowledged people’s perennial love for furry canine floofballs. This could be due in part to the extreme popularity of animal Twitter accounts such as @WeRateDogs, which use the word “doggo” on a regular basis.

2017 marked a very woke year for Merriam-Webster by recognizing socio-political terms that have been heavily used by people, such as feminism, empathy, dotard, recuse, and federalism. However, the group behind the publication left the year on a positive note by surprising everyone with the “doggo” bit, a saving grace for what many describe as an unfavourable year.

Active Twitter users rallied for the word to become an official part of the dictionary by flooding Merriam-Webster photos of their adorable, well, doggos:

Charley is the best doggo! pic.twitter.com/PlecjKnvFZ

I also have a good boy, though I'm not sure if he's a doggo or a pupper. Maybe you can help? pic.twitter.com/FHEzTTsX6y

Doggos? We have five. pic.twitter.com/wIpqFCnlvT

This doggo knows something we don't.

Merriam-Webster’s current definition for “doggos” is “in hiding —used chiefly in the phrase to lie doggo” and was first used in 1886. But it looks like another meaning will be added soon.

Words We’re Watching is a special column by Merriam-Webster online that talks about words that the group is “increasingly seeing in use” but have not yet met the criteria for inclusion.

So how does a word get included anyway? The answer lies in usage. According to their website, Merriam-Webster editors study the language as it’s used. They “carefully monitor which words people use most often and how they use them.The editors scour the texts in search of new words, new usages of existing words, variant spellings, and inflected forms–in short, anything that might help in deciding if a word belongs in the dictionary, understanding what it means, and determining typical usage. Any word of interest is marked, along with surrounding context that offers insight into its form and use.” So it’s not just a matter of making a word trend or go viral, it means making a word become part of our lexicon, otherwise Merriam-Webster would be inundated with just about every meme-related word conceived by the internet. This may mean that there should be continued use for the word doggo, and that its meaning should hold continued relevance for its users.

Continue to use the word and we might just see doggo in their dictionaries soon! 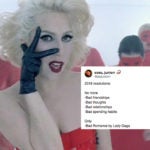 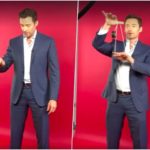